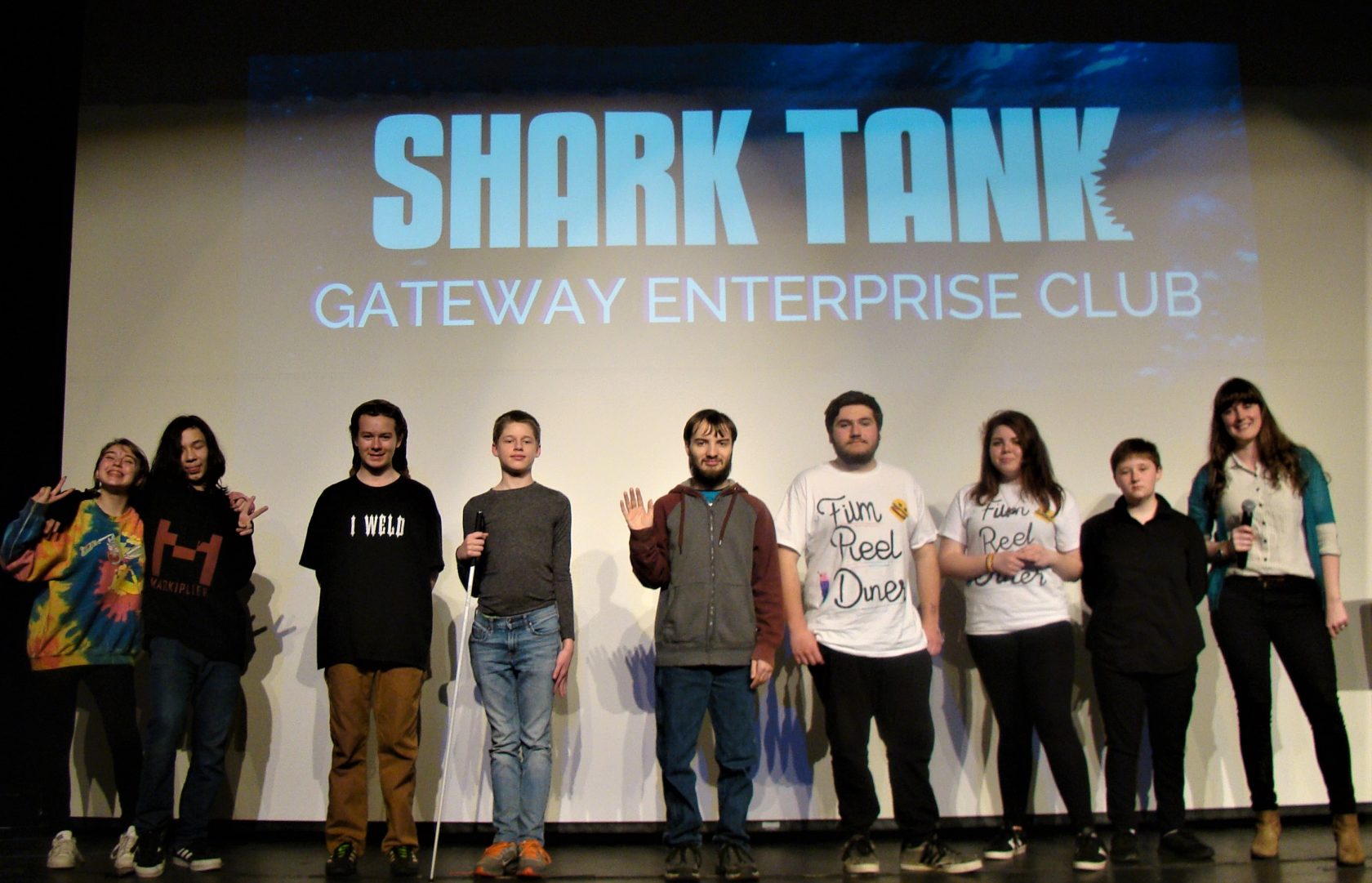 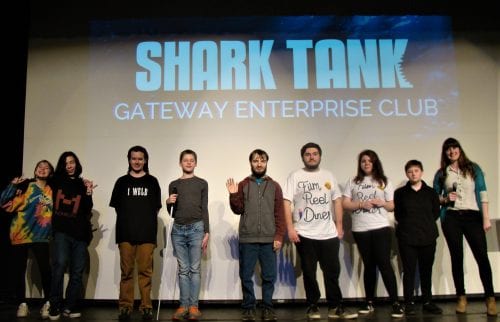 HUNTINGTON – The Gateway Enterprise Club, a club for young entrepreneurs, held its second annual Shark Tank competition on Friday. Judges from the Jacob’s Ladder Business Association (JLBA) listened to ideas for businesses pitched by students, and awarded a $250 scholarship to the winning presenter.
Club advisor Jeanne LeClair, economic development director for the Gateway hilltowns, told judges Elizabeth Massa, B.B. Birrell, Tamarin Laurel and Michele Kennedy that the presentations from the freshmen and sophomore students ranged from conceptual ideas costing millions to more concrete business plans. She asked them to consider all ideas equally.
Kirstyn Arel, Joshua Blake and Emma Dana gave the first pitch for the Film Reel Diner, a diner with a seasonal drive-in theater. Arel, who researched the project and made t-shirts sporting the name of the business, said the start-up costs would be $500,000 for both businesses, $275,000 for the diner alone.
Blake, head chef, said they would serve classic diner-style food featuring Reel burgers, and would have an outdoor snack bar for the theater. The team then served samples of burgers they had prepared to the judges, and gave out a sample menu designed by Arel. They said their plan was to locate at a local fairground. Arel said there are a lot of fairgrounds which are empty for much of the year, and the diner would be movable.
Dana, theater manager, said the movies would be seasonal-themed, such as Halloween movies in October, but they would play all sorts of movies. The team mentioned that there are no drive-in theaters in the hilltowns.
The next presenter, Aiden Mann, said his idea if successful had the opportunity to revolutionize how people get around places. He gave the example of someone driving and realizing they were running low on gas, who has to stop to fill their tank. His solution, called No Gas, involves placing solar-powered coils in roadways that would charge custom-made electric vehicles as they drive over them. 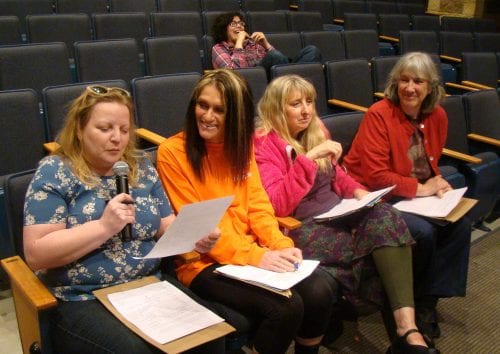 Mann said to be honest, it would cost $35 million to accomplish the feat, including research and development, laying coils in the road and manufacturing the cars. He said he hoped to get government grants for the eco-friendly project that would revolutionize how people get around, and eliminate a huge contributor to global warming.
Judge Tamarin Laurel suggested he look into public-private partnerships to fund the project, which he said he hadn’t considered.
Shamus Crane’s pitch was for the Ride with Pride Cycle Shop. Crane, a welding student at Gateway, said he plans to continue with the certified vocational program through high school and into college, and also apprentice at Valley Frameworks, a local bike builder in Easthampton to learn how to make frames for BMX bikes.
Crane said the initial business would be a bike shop to fix local bikes while he’s working on building frames and forks. He brought with him two bike frames to show the judges, one of which he said is considered the best in the world. “In racing, you cannot buy a complete bike that will perform well,” Crane said.
Crane said the shop would be located in his family’s house, and would also be a place to display bikes. He said the family is already invested, having started a race team called Family Pride, with the motto “Ride with Pride” over a lion head. He said the team has over 20 riders who have gone to five national races.
Crane said he estimates needing $5,000 to start the shop with used equipment, and once he makes a profit, he would reinvest to upgrade the equipment. He said his bikes would be hand-built to ensure quality.
Answering a judge’s question, he said it should take no more than an hour to make a frame that would sell for $500, or $700 in aluminum, and that he would market them on the internet and bring them to monthly events.
Next up, Brandon Therrien, a self-described gamer, said his idea was to enhance the world of virtual reality by enabling a whole dive into VR, transferring basic senses such as sight, hearing and touch into the game world. He said a helmet would cut off the senses in the real world and put them into the virtual world, and estimated the prototype would cost $50,000, and the production $2 million. 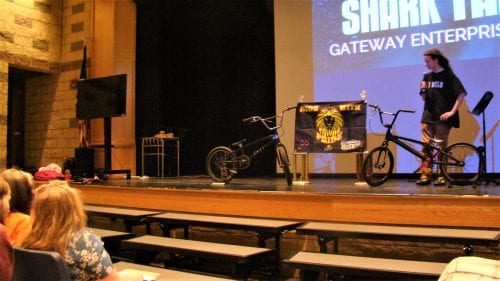 Shamus Crane explains his project to the judges. (Photo by Amy Porter)

Therrien said it would revolutionize the medical field, by building them into hospital beds, and allowing confined patients to go into the virtual world where they wouldn’t feel pain, and could see family and friends. He said it would also allow online friends from across the world to have more real contact.
In response to a question, Therrien said the helmet could have a failsafe that would read signs such as a spiking heart rate, and boot out the player.
Kamryn Wentworth said her idea was to use the empty Russell Elementary School as a place for kids to hang out and have fun. She said she would like to set up a three-part arcade, roller skating rink and laser tag in the building.
Wentworth said it would cost $50,000 to $60,000 to start it with arcade games from eBay, and $40,000 a month to run. She would charge $10 to $15 to play, and use wristbands, and offer a Gateway student discount. She said it would be successful because there’s not much else for kids to do in the hilltowns.
In response to a question from the judges, Wentworth said she would need 10 to 12 workers to run the arcade, skating rentals, skating and laser rinks.
A late entry, Benjamin Bellinger said his company Future Tech would make Skate Shoez, which would have pop-out rollers in them. He said some shoes now have rollers in the rear, but these would have front and back. Another idea he has is adding minerals to water, to make mineralized water, he said. 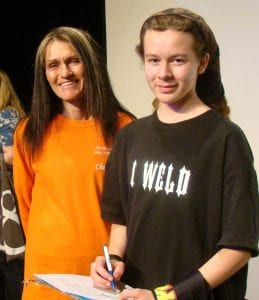 After leaving the room to consult, the judges returned with positive comments and suggestions for all of the projects.
Birrell announced that the runners-up for this year’s Shark Tank were the Reel Film Diner group, and the winner was Crane with the Family Pride bike shop.
“We were all totally on board – it’s a very realistic, well thought out plan, and you have the family support to run a family business in your own home,” Kenney said to Crane, before the judges presented him with a $250 check toward his business from the JLBA.
“I’m really excited. I plan on doing this, and have been going over this with my Dad and my welding teacher,” Crane said. He added that he had the idea before joining the Enterprise Club, but participating in the club has helped him to concentrate on it and plan ahead.