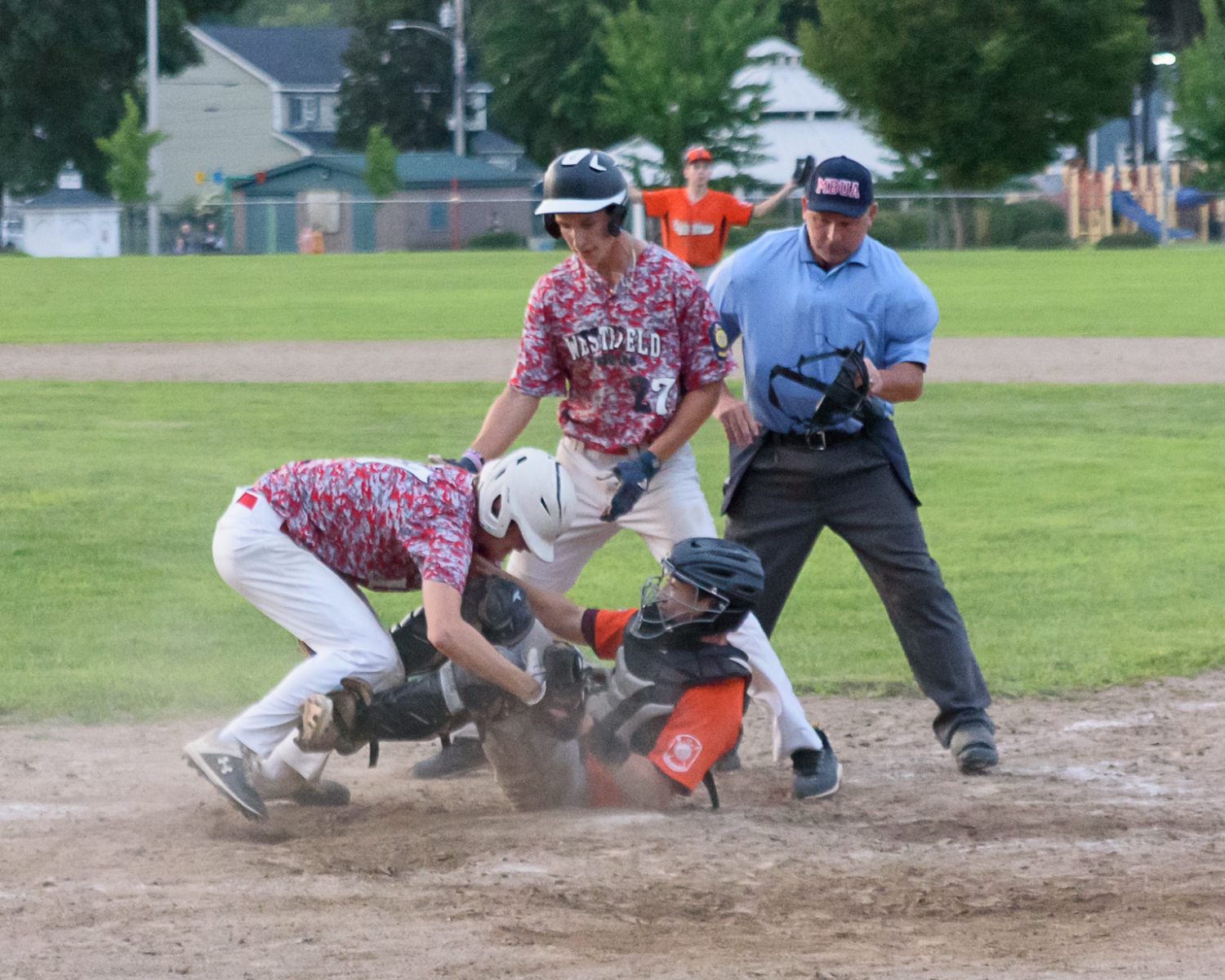 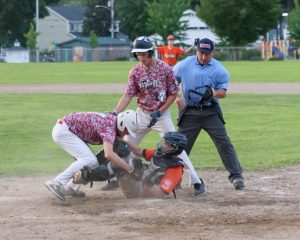 WESTFIELD – There was something extra special about this year’s version of the Legion Baseball title game.
Westfield pitcher Brody Zabielski delivered a gutsy performance on the mound and scored the game-winning run in extra innings to help Post 124 beat Belchertown Post 239 in the American Legion Baseball District 1-3 championship, 5-4, Wednesday night at Jachym Field.
Zabielski beat the throw home on a Joey Calderella sac-fly with the bases loaded in the bottom of the ninth inning to send unbeaten Westfield (10-0) into the state championship Saturday in Quincy.
“As soon as he hit it, I knew I was tagging up and scoring,” Zabielski said, regarding Calderella’s game-winner as darkness quickly enveloped the ball field.
Zabielski scattered seven hits over nine full innings. He struck out one batter, walked none, and allowed just two unearned runs (four earned).
Belchertown’s first two runs were unearned. Evan Hu reached on a two-base outfield error and scored on a Ty Gladu base hit. Jack Gelinas reached on a one-out error. Post 239’s second run scored on a wild pitch.
Westfield tied it in the bottom half of the inning. Calderella hit a lead-off single. With one out, Ryan LaPoint singled. An obstruction call on the basepaths between third base and home resulted in Post 124’s first run. Dylan King (3-for-4, 2 RBIs) tied the game 2-all on a run-scoring single.
Belchertown (6-3-1) reclaimed the lead in the third inning. Ryan Gaughan singled and advanced a base on a botched pickoff attempt. J.B. Mills walked. Both base runners advanced on a ground out. A Hu sac-fly RBI scored the go-ahead run.
Westfield bounced back in the bottom half of the fourth inning. Jake Jachym beat out a slow roller to the shortstop. Ryan LaPoint moved him over with a sac-bunt. With two outs, King hit a RBI single before being thrown out attempting to stretch the hit into a double.
Westfield went ahead in the fifth. Brennan Jarvis led off the inning with a double. With one out, Dan Provost put the ball in play. Belchertown opted to go home with the ball, but the ball popped out of the catcher’s glove when he attempted to apply the tag. Post 124 led 4-3.
Belchertown knotted the game again at 4-4 in the top of the sixth. Owen Raines followed up consecutive singles from Gladu and Nate Mills with a two-out base knock, driving in the tying run.
Both teams had base runners on in the seventh and eighth innings but failed to push any runs across.
Flash forward to the bottom of the ninth. After registering one out, Belchertown pitcher Ryan Gaughan reached his maximum pitch limit. Post 239 turned to the bullpen. Zabielski walked and stole second base. Provost walked, forcing another pitching change. Westfield pulled off a successful double steal. Dylan Arooth walked, loading the bases and setting the stage for the dramatic finale.
“I was really nervous up there but my teammates put me in good position,” Calderella said, describing his thoughts as he walked to the plate with the bases loaded and one out. Calderella said to himself, “Just square the ball up. If I can hit it to the outfield, (Brody) can likely tag up or it’s a hit and the game’s over. Just don’t try to do too much.”
The rest was history.
“It was a long challenging game but we stuck with it,” Calderella said. “Teamwork, sportsmanship, and etiquette I think just got us the win.” 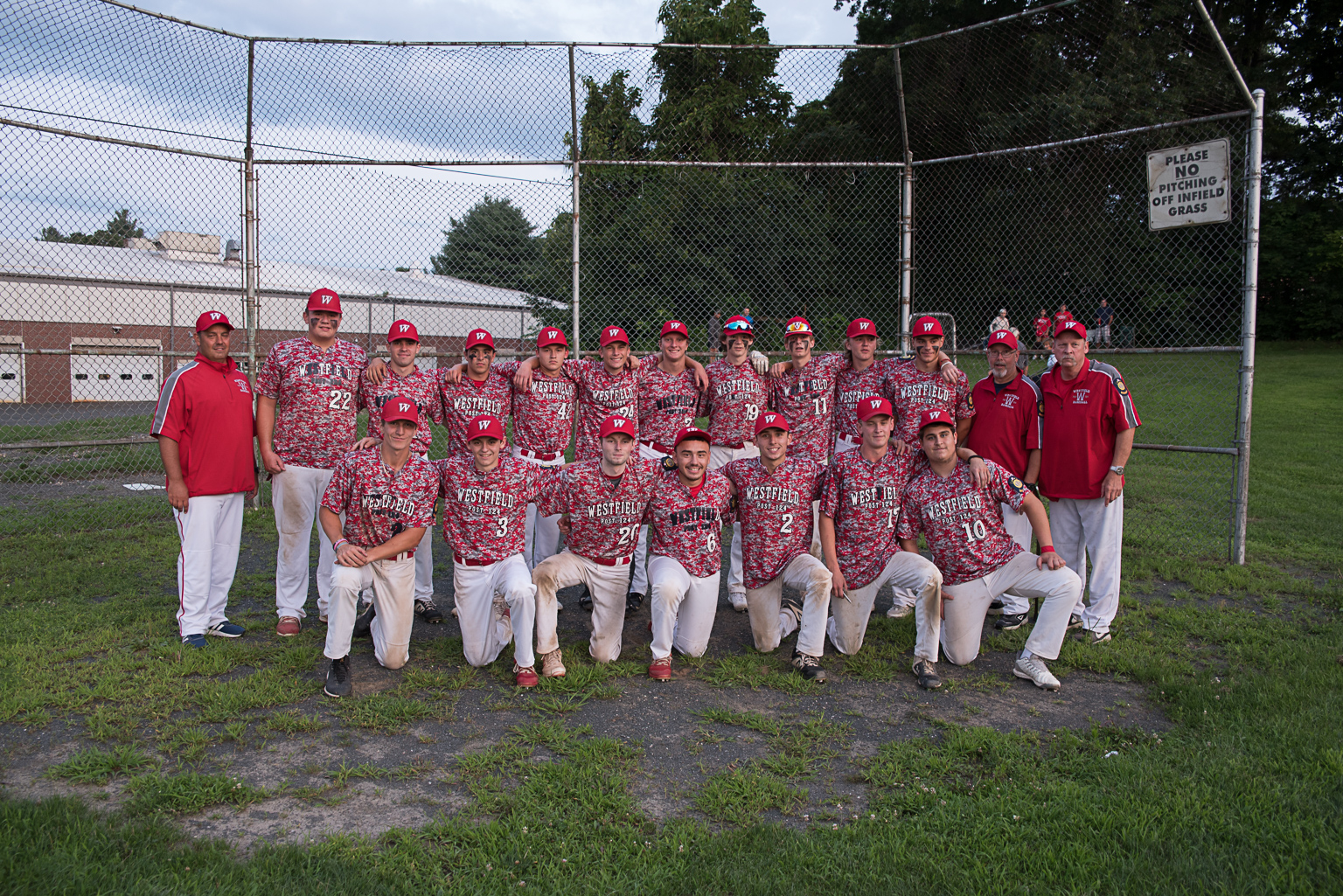