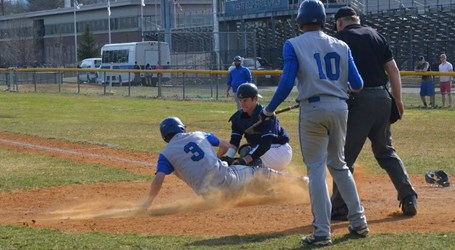 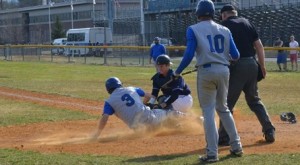 WESTFIELD – The Westfield State University baseball team begins the 2016 campaign with 17 veterans and 14 new faces on the roster. With six returning starting position players, and a deep pitching staff, the Owls will look to build off a 2015 season in which they finished with a 20-13 overall record, posted a 6-8 mark in the MASCAC, and lost in the quarterfinals of the conference tournament.
Westfield State was picked to finish second in the conference this season by the league’s coaches. The Owls open their season on Saturday, March 12 with a doubleheader against Dickinson College at Lake Myrtle Park in Auburndale, Florida.

THE LINEUP
The Owls return their top four batting average leaders from last season, including first-team all-conference outfielders Danny DiMatteo and Dan McCormack.
McCormack, a two-time All-MASCAC centerfielder, started 32 games last season, hitting .309 with nine doubles and 18 RBI. The senior captain will likely hit lead off for the Owls this season.
DiMatteo will patrol both corner outfield spots and hit in the heart of the lineup. The senior led the team in slugging percentage last season (.611), and ranked top 10 in the conference in slugging, batting average (.372), and on-base percentage (.425).
When everyday first baseman Nate Barnes takes the mound, DiMatteo will also slide over to first. Barnes started 32 games last season, hitting .282 and committing just two errors all season.
Junior Kyle Murphy, seniors Tyler Adams and Connor Sheridan and freshman Anthony Crowley will also see opportunities in the outfield for Westfield. Adams and Sheridan will also compete for the starting third baseman position.
After leading the Owls last season with a .375 batting average and a .456 on-base percentage, Sheridan will hit near the top of the order. In MASCAC play, Sheridan led the conference in batting average (.459) and on-base percentage (.556).
Westfield State will rely on a talented freshmen class to anchor its middle infield. Former Westfield High standout Colin Dunn is the projected opening day starter at shortstop, while Christian Morales (Peabody, Mass.) will likely get the nod at second base. Junior Arismendy Larancuent and freshmen Tyler Beach and Jared Ferrari will provide infield depth for the Owls.
Seniors Evan Moorhouse and Dan Whigham will once again platoon behind the plate. Moorhouse started 19 games last year, while Whigham started 14 without committing an error. Freshmen Aaron Clancy, Alex Benevides and Jacob Lanpher will provide depth.

Clancy and Crowley will both see action offensively, in addition to their defensive opportunities.

PITCHING
Westfield’s strength on the mound will come from its depth in both the starting rotation and in the bullpen.
The Owls expect big things from senior Justin Thomson and junior left-hander Nate Barnes, who pitched 25 innings and 20 innings respectively in 2015 and saw conference playing time. Thomson finished 2-2 in five starts last spring while Barnes posted a 2.18 ERA. They will look to seize the weekend role in MASCAC matchups.
The hard-throwing Nick Cunningham (2.52 ERA) will also be leaned on heavily in a starting role, while freshman John Gegetskas, sophomores Nate Marshall and Ray Bell, along with junior Matt Nunes will compete for starts.
Pete Liimatainen will once again fill the closer role for the Owls. The senior captain made 12 appearances out of the bullpen last season, posting a 2-2 record with five saves and a 1.53 ERA.
Added depth on the mound is provided by a talented yet untested group of young arms including sophomores Tyler Tongue, Jeff Svendsen, Jarrett Archambault and Steve Brown along with freshmen Brian Hollister, Bobby Gegetskas and Scott Strachan.

OUTLOOK
For a successful 2016 campaign, the Owls will need to replace six seniors from last year’s club, including weekend starting pitchers Peter Cassidy and Tommy Nowlan, and designated hitter Tim Santilli. The Owls need the renovated infield lineup to gel, and will look to continued improvement from a young pitching staff to go along with solid defense and timely hitting.

COACHES
Coach Nathan Bashaw is now in his third at Westfield State, and returns assistant coaches Fred Perry and Rey Rivera. Newcomer Brian Mazella will be the new pitching coach.
Coach Bashaw will lead the team to warmer weather March 12 for the annual spring break trip to Florida. The Owls will play 11 games at the RussMatt Central Florida Invitational, including a season-opening twin bill against Dickinson College at Lake Myrtle Park in Auburndale, before returning north for conference play.