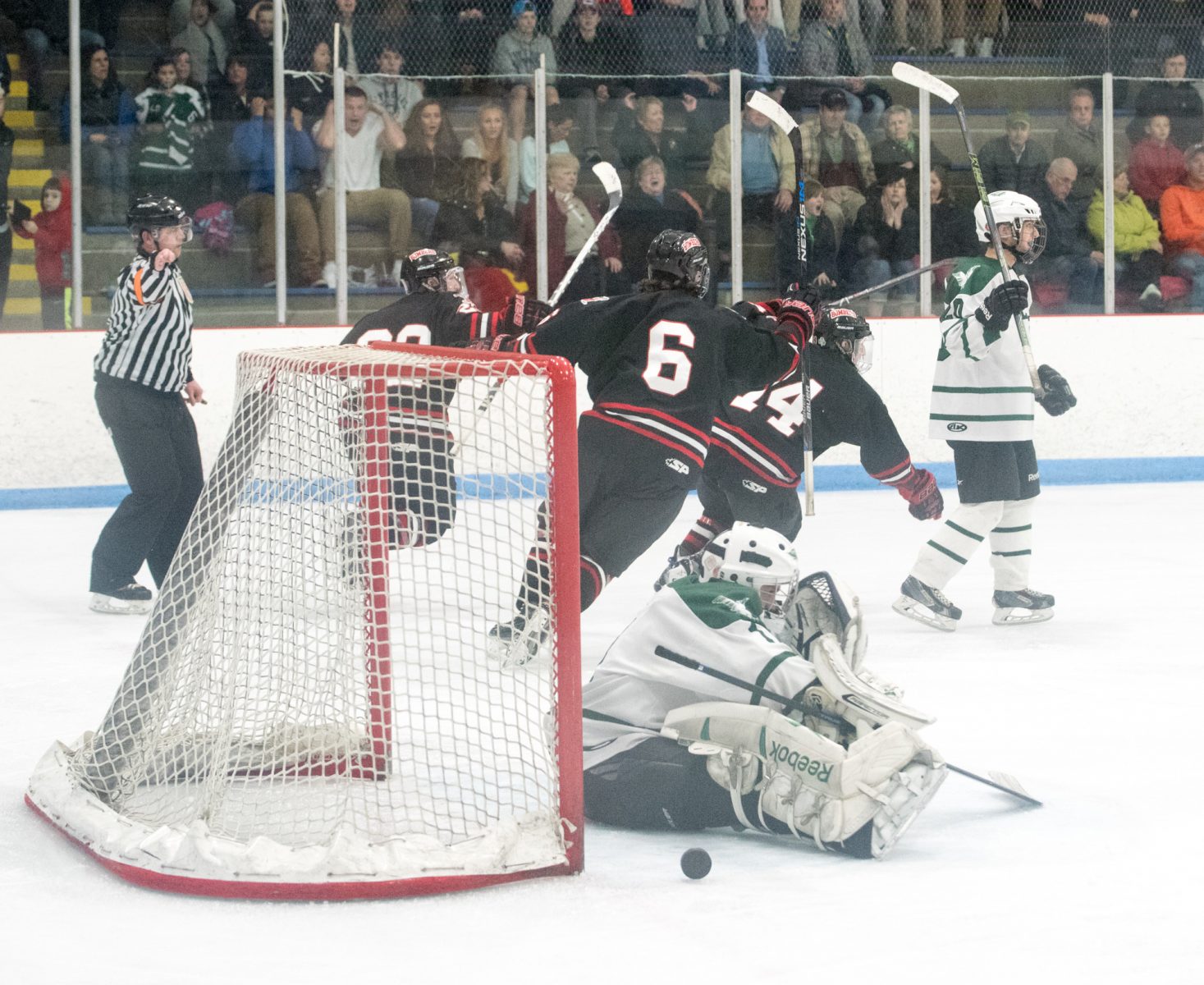 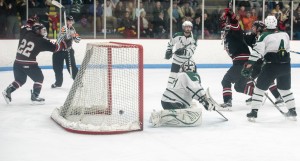 WEST SPRINGFIELD – Westfield was the only team in the West Division 3 boys’ ice hockey tournament to enter the 2016 postseason with a losing record (9-10-1), needing a tiebreaker just to edge out Berry Division foe, Ludlow.
Things looked bleak for Westfield as the tournament’s Nos. 1 and 2 seeds, Longmeadow (15-5-1) and Minnechaug (17-5), had swept the Bombers in home-away series during the regular season. But the Bombers had heart … and a player by the name of Liam Whitman.
For the second straight game this postseason, Whitman scored a game-winning shot in overtime. Whitman’s goal came from about 15 feet away out in front of the net with 4:49 remaining in OT, lifting the fourth-seeded Bombers to a championship title.
“Like we did against Longmeadow, we weren’t giving up,” said Whitman, whose team rallied from a 2-0, third-period deficit to defeat the Lancers in the semifinals. 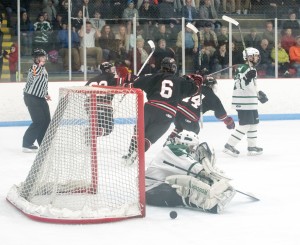 The celebration begins as the fourth-seeded Westfield Bombers upended the No. 2 Minnechaug Falcons in the Division 3 West Sectional championship Thursday night at the Olympia in West Springfield. (Photo by Bill Deren)

Westfield was put to the test again in the finals as Minnechaug rallied twice from one goal down, the last of which forced the overtime period.
Westfield struck first.
Colin Burns put Westfield out front when he chipped the puck from in close with 7:54 remaining in the opening period. Porter set up the play, delivering the puck from the side of the net to Burns.
Minnechaug responded in lightning-quick fashion, scoring 41 seconds later. Tyler Rose took a pass from Noah Hemmenway inside the left circle. Hemmenway unleashed the long slapshot, sneaking it inside the right post for the game-tying goal.
In the second period, Westfield reclaimed the lead on an impressive individual effort. Whitman took the puck near the blue line, bobbed and weaved in between three Minnechaug defensemen, slipping past all three Falcons, and capping off the play by wristing it past goalie Aleks Vanderleeden.
Minnechaug rallied again though.
Cameron Mariani took a centering pass out in front of the net and banged home the game-tying goal for Minnechaug with 9:23 remaining in regulation. Joshua DeCarolis and Anthony Piteo earned assists. 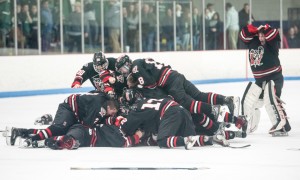 The Bombers pile up at center ice after capturing the Division 3 West Sectional boys’ ice hockey championship Thursday night at the Olympia in West Springfield. (Photo by Bill Deren)

Late in January, Minnechaug rallied from a 2-0 deficit, scoring three unanswered third period goals to stun Westfield 3-2.
Would memories of that regular season collapse bubble to the surface and haunt Westfield again? No. They would remain frozen, trapped in the past.
Both teams made a strong push in the final minutes.
Westfield’s Zach Jarvis attempted to end it with big-time shots late in the third period and early in OT. Mariani had a shot turned away a short time later. Both goalies, Cameron Parent and Vanderleeden made key saves.
Just moments after Parent saved Mariani’s shot, Whitman – set up by Jarvis and Max Maggipinto – ended it. 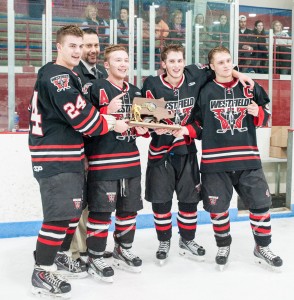 The Bombers strike a championship pose with the Division 3 West Sectional trophy. (Photo by Bill Deren)

“No one anticipated us being here (in the playoffs), never mind the finals,” Westfield coach C.B. “Moose” Matthews said. “We had a lot of holes. It took a long time to plug them. Down the stretch, we played Bomber hockey.”
It might have seemed like a Titanic-sized task at times for Westfield this season, but the Bombers came together.
“We’re a family,” Whitman said. “We stuck together through it all.”
After celebrating with teammates on the ice, holding up the championship trophy, and skating around the ice, Whitman exited the ice to chants of “MVP” by throngs of fans from the student body, relatives, and local supporters.
Just before he exited the ice, Whitman grinned and said, “We have a legacy to uphold here. We couldn’t let everyone down.” 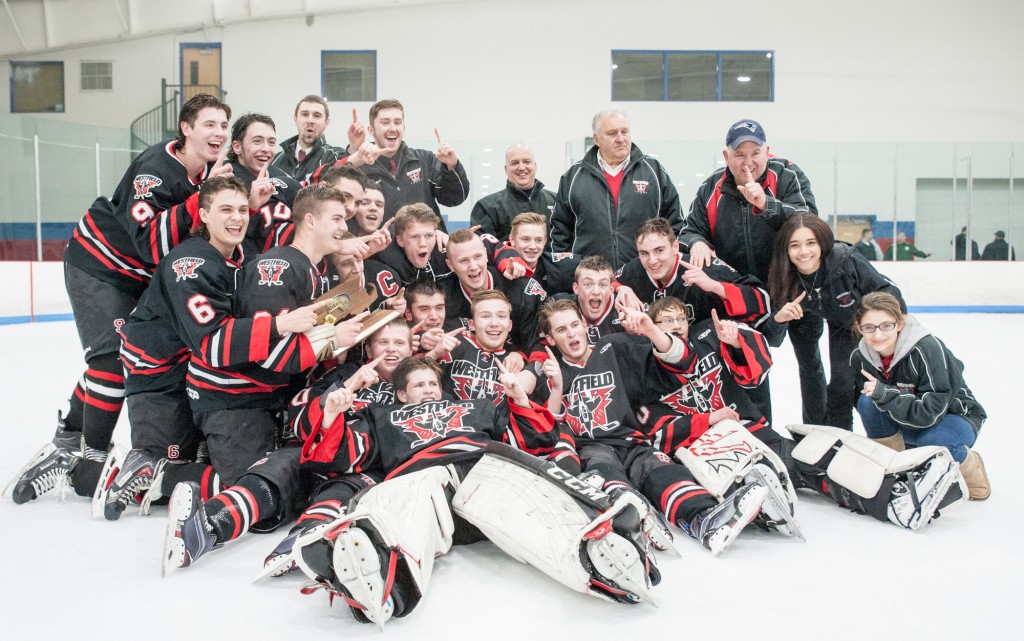