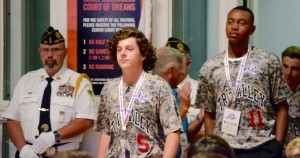 SPRINGFIELD –It is no surprise that Tri-Valley outfielder Michael O’Hara was one of the first players to enter the Babe Ruth Baseball 14 Year-Old Banquet of Champions for his team at the Naismith Memorial Basketball Hall of Fame on Wednesday night.
O’Hara is the lead-off hitter for Tri-Valley, California. He and his camouflage-jerseyed teammates appeared to have a bit of a swagger as they marched down the center aisle to take their seats. There is good reason for their cool, calm demeanor.
Tri-Valley has been parading around for nearly a year now after winning the 2015 World Series as 13-year-olds in Jamestown, New York, completing their run with a 20-0 throttling of Tri-County (Maine).
If people think this team just expects to walk away with another title, think again.

“Ever since it ended last year, we’ve been hungry to get back,” said O’Hara, whose home field is located on a military base in Dublin, Calif. “We’ve been working hard at it. We know how much it takes, because being here from last year it was an incredible experience.
We’re just ready to get back playing some ball.”
Tri-Valley departed the airport Tuesday morning at 2 a.m., travelling nearly 3,000 miles across the entire country to the east coast, similar to their flight path a year ago.

“We did (the same thing as) last year so we could keep the good mojo rolling,” O’Hara said. “We’re super excited to get started.”
Tri-Valley will start defending its World Series title Thursday against Sarasota (Florida) in their ’16 series opener at Bullens Field at 4 p.m.
“(It’s going to take) more of the same … even a little bit more than that,” O’Hara said. “The teams here look outstanding. We’re excited to play some good teams, better competition than we have, so it will be fun.”
Games begin at 8:30 a.m., and end with Westfield-Portland (Maine) at 7 p.m. The opening ceremonies will take place at 6:15 p.m.
Notes: Nine-year-old Sophie Lawry, of Westfield provided an amazing rendition of the National Anthem at the banquet … The 2013 Red Sox World Series trophy will be on display Friday at Bullens Field during the Babe Ruth 14 Year-Old World Series from 11 a.m. to 1:30 p.m.