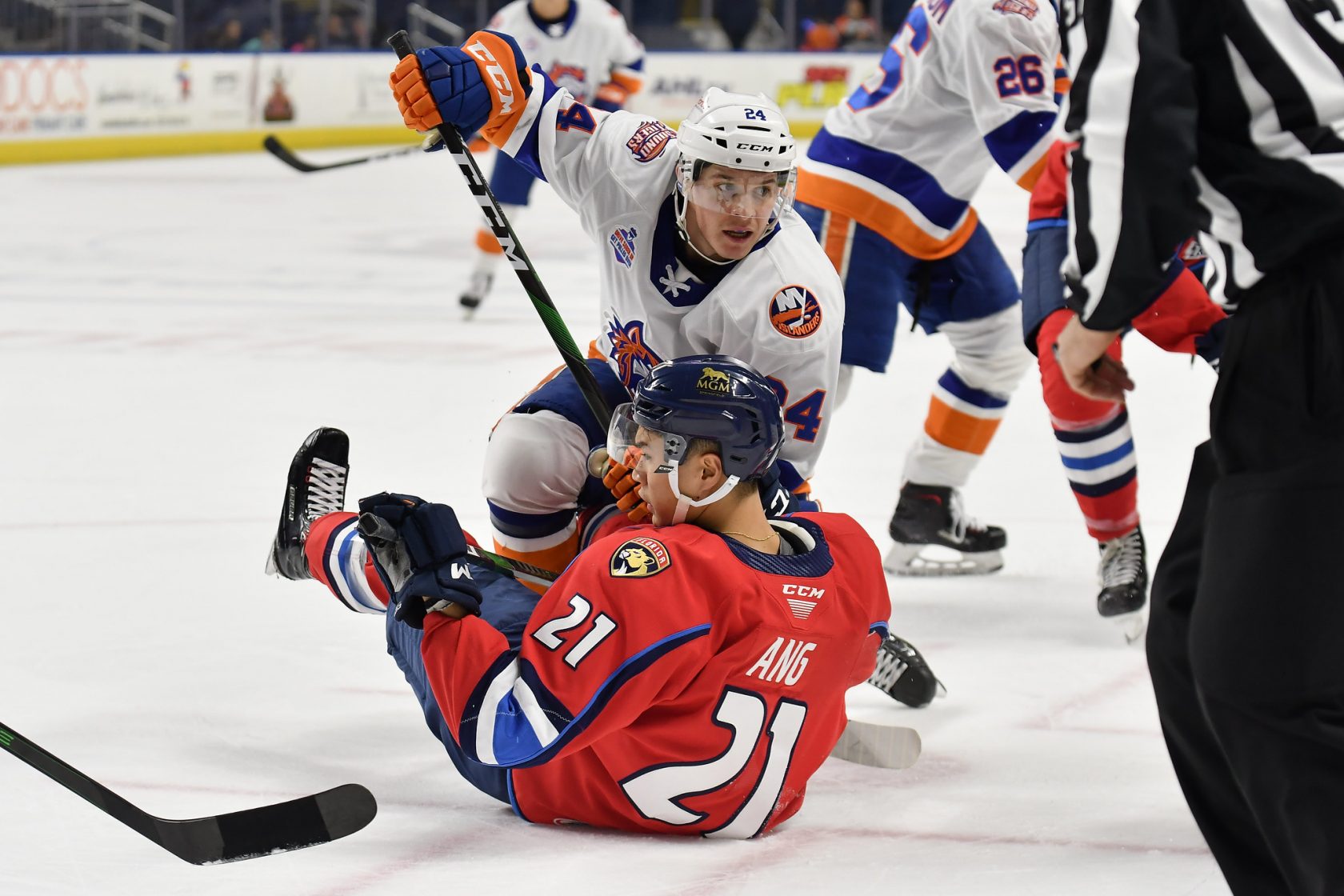 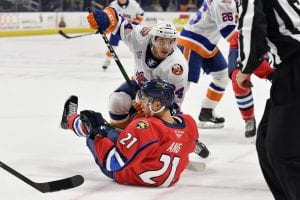 The Bridgeport Sound Tigers held off a 40-shot attack from Springfield to down the Thunderbirds 3-1. (Courtesy of Springfield T-Birds)

BRIDGEPORT, CONN. – The Springfield Thunderbirds (12-9) again fell victim to an opposing goaltender in a zone as the Bridgeport Sound Tigers (6-11-3-1) held off a 40-shot Springfield attack for a 3-1 victory on Sunday afternoon inside the Webster Bank Arena.
First period struggles again reared their ugly head for the Thunderbirds before the game was even two and a half minutes old, beginning with an Arnaud Durandeau deflection past Chris Driedger at the 2:08 timestamp. Parker Wotherspoon got the initial shot into the traffic from the left point position to get the primary helper.
Before the Thunderbirds could recover, the Sound Tigers opportunistically added a second goal just 10 seconds later, as Andrew Ladd intercepted a T-Birds breakout pass in the slot and snapped a forehand try through the five-hole of Driedger to make it 2-0.
Springfield’s power play had two cracks at biting into the deficit, but the Sound Tigers and netminder Jared Coreau turned out all 10 T-Birds shot attempts in the opening period. At the other end, the Springfield penalty kill held their ground to survive a full two minutes of a Bridgeport 5-on-3 to keep the deficit at 2-0 into the intermission.
Coreau continued to hold his ground in the second, as Springfield’s dangerous penalty kill had a golden opportunity to cut the lead in half, but the Bridgeport goaltender denied Anthony Greco from close range on a 2-on-1 rush. Later, Coreau used all of his 6-6 frame to stretch to his stick side to deny an Owen Tippett one-time rip from the top of the slot.
At the other end, Driedger did his part to keep Springfield within a reasonable distance, as he turned aside all 12 second period offerings that entered his crease.
The third period would be Coreau’s busiest, which included parts of three power plays for the T-Birds as well as 22 Springfield shots, but the Bridgeport netminder kept the T-Birds at bay. After serving his own penalty time, John Stevens returned to play and, on a 2-on-1 with Colin McDonald, let a rebound from Driedger hit him in the chest and bounce into the gaping net to extend the lead to 3-0 with 4:55 to play.
Coreau may have picked up his first shutout since last February if not for his own desire to try to score into an empty Springfield net with less than 90 seconds to play. Instead, Coreau’s attempt was knocked down and backhanded into a mostly empty goal by Kevin Roy for a Springfield power play goal to round out the scoring. Driedger finished with 37 saves, while Coreau made 39 in a game that saw both teams fire 40 shots on net.
For more ticket information or to become a 2019-20 Springfield Thunderbirds ticket package member, or to purchase single game tickets, call (413) 739-GOAL (4625) or visit www.SpringfieldThunderbirds.com. – Courtesy of Springfield T-Birds