MOSSO: Members of the Springfield Symphony Orchestra will perform with the Kevin Sharpe Group at The Springfield Jazz and Roots Festival in Springfield on Aug. 14. They are also scheduled to perform Morning Music at Stearns Square on Aug. 28, and Sept. 4 at NOSH in Springfield.  For details: www.springfieldsymphonymusicians.com/events.

The Great American Songbook Singalong. Hershey Felder, a frequent performer at Berkshire Theatre Group and Hartford Stage, has been streaming programs for both theatres (and others nationwide) during the pandemic from his home in Florence, Italy. He’ll be streaming an audience participation program on Aug. 22, to benefit selected regional theatres, among them Berkshire Theatre Group. He’s taking song requests too. For details: www.berkshiretheatregroup.org.

My Evil Twin, a new cabaret musical starring identical twin opera singers, Jim and John Demier, plays the Workroom at A.P.E. @Hawley in Northampton, Aug. 13-15. My Evil Twin exposes tenderness and vulnerability beneath masculine bravado as the twins tell the story of their lives in words and song. It is a tribute to sibling love, with songs by Eric Sawyer, script by Harley Erdman, and staging by Ron Bashford. For details: www.eventbrite.com/e/my-evil-twin-tickets-161654098761?aff=ebdssbdestsearch 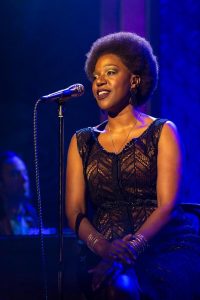 Summer of Simone. Nina Simone, musician, composer, and artist to be exact. Berkshire Theatre Group celebrates the late artist with Christina Ham’s play with music, Nina Simone: Four Women, Aug. 13 to Sept. 5 at the Unicorn Theatre in Stockbridge. Goodspeed Musicals presents a new musical, Little Girl Blue: The Nina Simone Musical to its Goodspeed by the River Series, running Aug. 4-29. The Goodspeed production features Springfield native Broadway artist Laiona Michelle as the music legend. Michelle wrote and conceived the musical with the support of Goodspeed. For details on Berkshire Theatre Group’s production: www.berkshiretheatregroup.org. For details on Goodspeed by the River: www.goodspeed.org.

Stephanie J. Block, Tony Award winner for The Cher Show, performs her concert Returning Home, at Berkshire Theatre Group’s Colonial Theatre tent in Pittsfield, on Aug. 21. She’s expected to perform songs from her many roles on Broadway. For details: www.berkshiretheatregroup.org.

The Wild Thyme Band brings Celtic folk music to the Huntington Town Green on Aug. 15, as the Historic North Hall Association’s second outdoor concert of the summer. (In case of rain, this concert will be held inside Stanton Hall next to the Green). The Wild Thyme Band will draw from the rich repertoire of Irish and Scottish traditional music and includes some French Celtic music as well. For details: www.northhallhuntington.org.