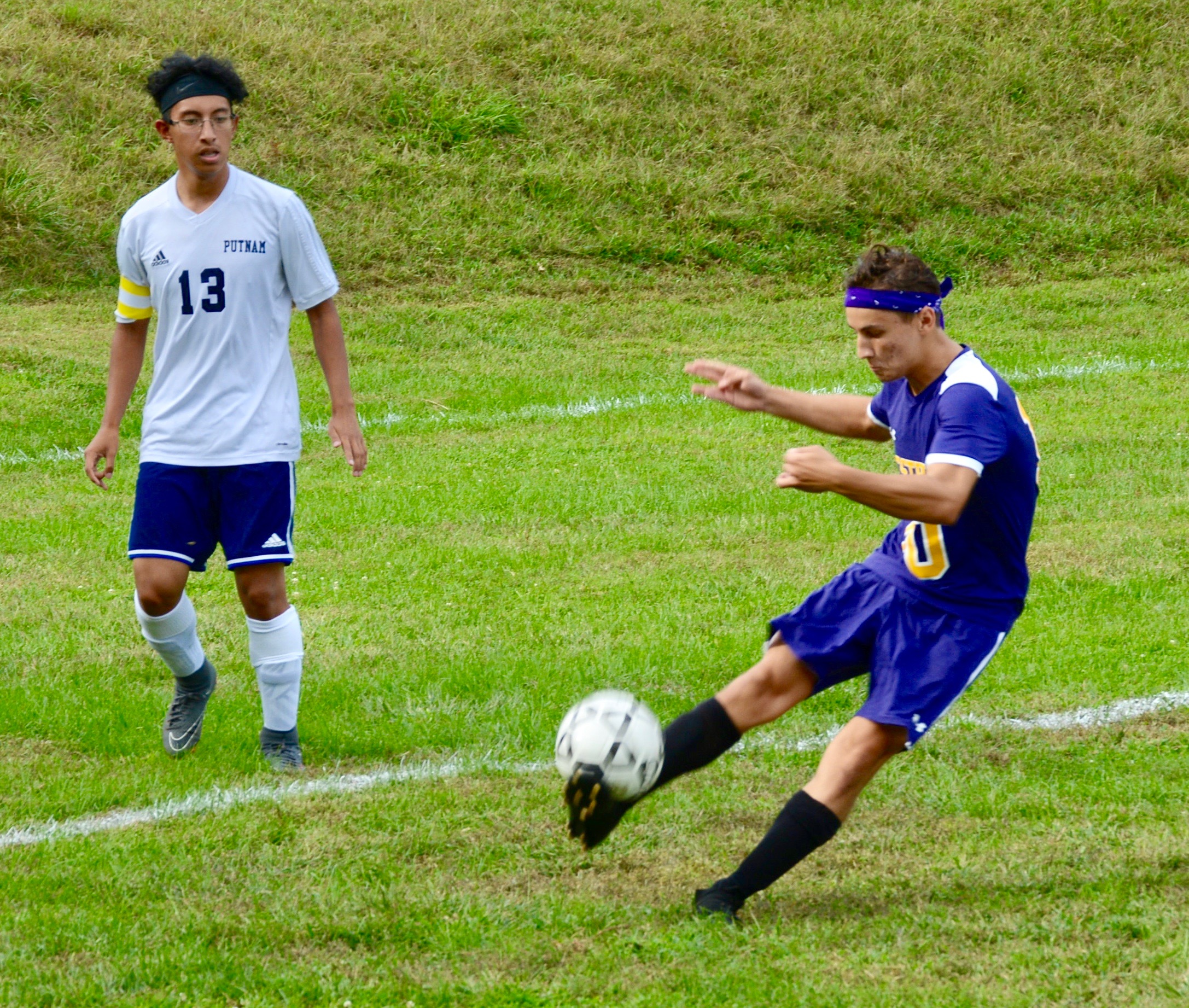 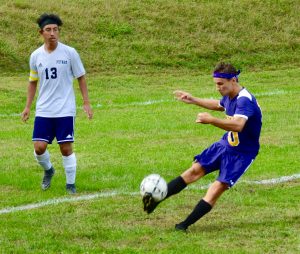 Westfield Tech’s Phllip Lisyanyy gets a foot on the ball as a Putnam player looks at the ball during a game played in the first half of the season. The Tigers are preparing for the stretch run. (Staff file photo)

WESTFIELD – Although the Westfield Tech boys soccer team appears to be heating up, they will be severely tested this week as the temps get cold and the schedule gets tougher.
“We have our fate in our own hands,” said Westfield Tech coach Kyle Dulude, whose team is scheduled to play five games this week over a six-day stretch, albeit all at home.
Westfield Tech hosts Hampden Charter School of Science (Tuesday), Commerce (Wednesday), Pioneer Valley Christian Academy (Friday), and McCann Tech (Sunday).
All of the weekday games will be held at Jachym Field, beginning at 4 p.m. The special Sunday showdown will be played at Westfield State University at 5:30.
Westfield Tech (10-1) opened the season on fire, winning nine straight games. The Tigers suffered their first loss this week against the undefeated Easthampton Eagles (12-0) before bouncing back against Putnam.
On Friday, Westfield Tech scored three goals in the first 20 minutes en route to a 4-1 win over Putnam.
“We came out on fire,” coach Dulude said.
Senior leaders emerged with Brad Marion (2 goals), Vitaliy Borodin, and Frank Florek each getting in on the scoring act.
“I feel we could put something special together because of the way our team chemistry is coming together,” coach Dulude said. “Today we are playing as one.”
This united bunch now needs one more win, followed by one more win, and another, and another, and so  to complete a banner year.

GIRLS SOCCER
Gators post key shutout
Gateway 2, Mahar 0
Gateway scored one goal in each half – one score each from Peyton Bucko (Hannah Duggan assisted) and Erin Harris (Nina Iglesias assisted) – to hand Mahar its first league loss of the season.
“They’re an excellent team,” Gateway coach Steve Estelle said. “They had a few more shots than us (7-to-5) … but defense was really the story of the game. “
Gateway goalie Becca Herman stopped six shots, and Charlotte Kazalski, Iglesias, sweeper Hannah Coffey and Angela Wright dominated with a diamond defensive effort.
“It was a great game, a great win,” coach Estelle said.