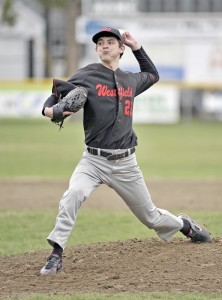 Westfield starting pitcher Kenny McLean delivers a pitch during a 2014 regular season game. McLean is settling into his increased role for the Bombers. (Photo by Frederick Gore/www.thewestfieldnews.smugmug.com)

WESTFIELD – The two-time defending Western Massachusetts Division I baseball champion Westfield Bombers are halfway home to beginning their postseason run.
With just nine games remaining in the 2014 regular season, Westfield is 8-3.
Senior flame throwers Brent Houle and Matt Irzyk have been electric on the mound so far the Bombers, and junior pitcher Kenny Mclean has blossomed in his increased role.
“We haven’t gotten much into depth in pitching because (those three pitchers) have done such a good job in starts,” Westfield coach Rich Discenza said.
Discenza said Westfield’s offense has thrived under players such as junior Chris Sullivan (one of the team’s top contributors), junior Craig Lacey (who is following in the same mold of Sullivan in that he has been thrown into the mix and expected to contribute immediately), and the entire senior roster.
According to Discenza, the team will attempt to shore up its defense over the second half of the season and earn another tournament berth.
“Our focus is to get to 10 wins and go from there,” the Bombers coach said.
Teams are eligible to compete in the postseason with a .500 or better regular season record, or a first or second place finish in their respective leagues.
Up next for Westfield: at West Springfield (May 2), at Pittsfield (May 3), and at Longmeadow (May 6).

Rams pitch in for hot start
DIVISION II
SOUTHWICK – Southwick-Tolland Regional is off to a fast start in Division II baseball.
With surprising comeback victories against Greenfield – Southwick rallied for three runs in the seventh – and Palmer, Southwick has put together a 7-1 mark. The Rams have reeled off seven straight wins, after being silenced in their opener.
“After that first game, our pitching has been great,” Southwick coach Tim Karetka said. “We haven’t allowed too many hits, our defense has gotten us out of jams, and when the defense has faltered our pitchers have stepped up and gotten big outs for us.”
Junior Bob Hamel, sophomore Andrew Mitchell, and seniors Nick Maserelli and Brian Sheil have been featured in the rotation thus far.
On offense, Southwick has been led by Sheil (batting close to .500), junior Vinnie Fortini, and sophomore Jake Goodreau.
“They are such good hitters and threats,” coach Karetka said of his offensive weapons.
Southwick is gearing up for a tough second half, beginning with Monson Friday at 4 p.m., followed by Wahconah (Saturday), and Gateway (Tuesday).

Tigers’ success uncaged
DIVISION III
WESTFIELD – The Westfield Vocational-Technical High School baseball team has defied the odds.
Voc-Tech began the season with a new man in charge. Former softball and current boys’ soccer and basketball head coach Kyle Dulude replaced longtime baseball coach Clem Fucci.
The Tigers have exceeded the expectations of many fans by compiling a sterling record of 7-2 overall. They are 7-1 in the Tri-County League.
“Good pitching has been our strength along with solid bats and defense,” Voc-Tech coach Kyle Dulude said. “Baserunning has been suspect and full commitment by a few players, but the guys we got now are fully committed. I believe although we only have 14 players, they love the game of baseball and are having fun.”
Much is still to be decided though.
“We had a very solid start yet we haven’t really won anything at this moment in time,” Dulude said. “We have been building chemistry and brotherhood. These players are a great group, and a lot of fun … I believe our five seniors will be the key to finishing the season strong, along with continuing to do the things we have been doing right.”
Several players also participated in community service projects, drawing praise from their head coach.

So far, a walk in park for Gators
DIVISION IV
HUNTINGTON – Gateway Regional’s pitching staff is allowing six walks per game through the first nine games of the regular season.
In any other season, that might be problematic. But this isn’t just any old season.
Gateway Regional is off to a blazing 7-2 start. Gators’ Justin Edinger (12 stolen bases, a streak of 13 straight at-bats reaching base safely), Geoff Sobotka, and Johnny Haskell have produced almost daily, while others such as Willis Pollard, Ethan Gamble, and the Dowers brothers – Curtis and Calvin – continue to follow with a 1-2-3-4-5-6-7-8-9 punch.
“We always have four to five guys hitting in one game,” Gateway coach Gary St. Peter said. “We are scoring a lot of runs. That helped our pitching staff early in the season (with outdoor practice time shortened due to poor weather conditions), but our pitching needs to get better.”
While Gateway’s staff has allowed several walks, the Gators are striking out nearly eight batters a game.
“We really haven’t put everything together yet,” St. Peter added. “If we put everything together, we could make a run at a Western Mass. title.”
Up next for Gateway: at Palmer (May 2), vs. Southwick (Tuesday), and vs. Smith Voke (Wednesday).

NOTE: St. Mary did not respond to calls regarding our Midseason Baseball Report.