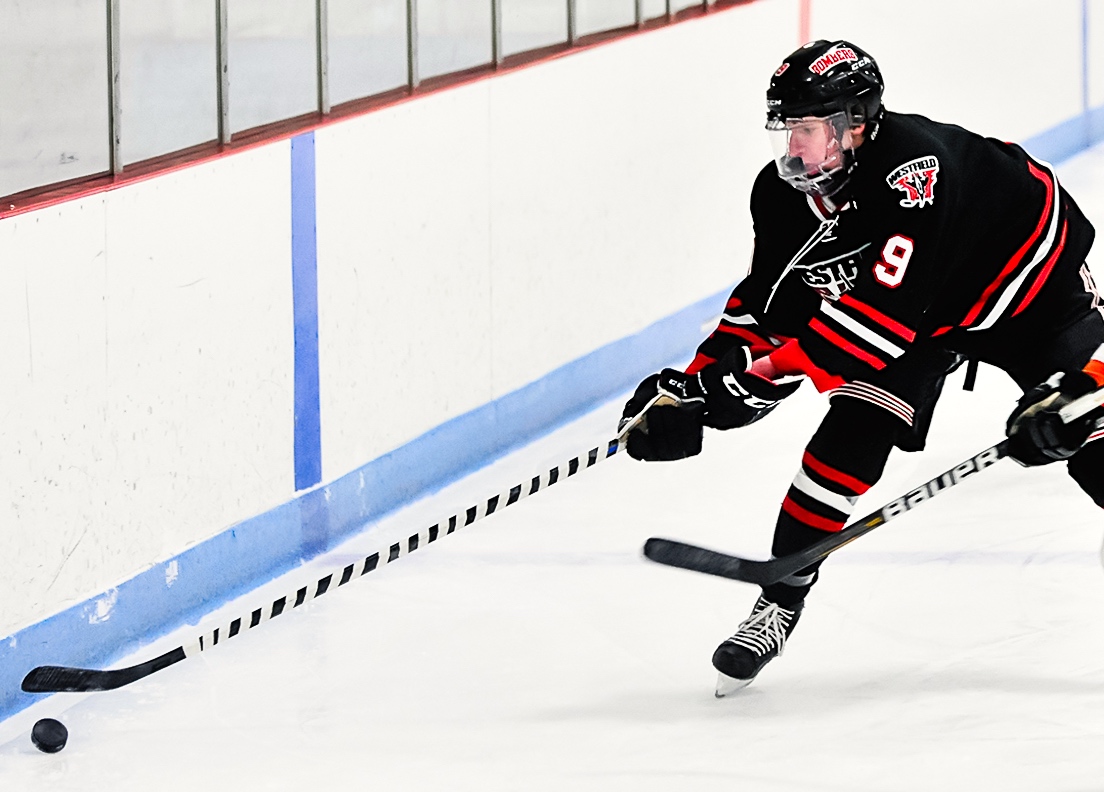 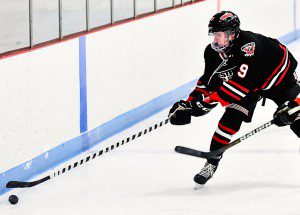 Westfield’s Connor Sullivan, left, snags control of a loose puck during a 2014-15 regular season game. Sullivan was instrumental in leading the Bombers to victory Wednesday night at Groton-Dunstable. (Photo by Frederick Gore)

GROTON – Westfield’s Connor Sullivan scored two goals, including the eventual game-winner, and had one assist as the Bombers rallied from a 2-0 first-period deficit on the road to defeat Groton-Dunstable Wednesday night.
Sullivan’s first goal, set up by Liam Whitman, put Westfield on the board. Whitman tied the game with assists from Chris Sullivan and Mario Metallo a short time later. Colin Burns gave the Bombers a 3-2 lead with a first-period score, thanks to Chris Sullivan and Sean Moorhouse.
Zach Jarvis made it 4-2 in the second period, courtesy of passes from Connor and Chris Sullivan. Groton-Dunstable cut the lead in half, until Connor Sullivan (off a pass from Zach Jarvis) added a crucial insurance goal.
Groton-Dunstable scored again, but the effort proved fruitless.
Westfield’s Garrett Matthews won the matchup between goalies, coming up with a half-dozen critical saves.

Balderston, Hurricanes mow down Saints
Amherst 8, St. Mary’s 2
Jake Balderston scored five goals to lead Amherst at Amelia Park Ice Arena. Shaun Gezotis (from Dominic Ceccarini) and Johnathan Spear scored the lone St. Mary’s goals.
“Though the outcome was not what we were looking for on the scoreboard, we played cleaner and smarter hockey than we have in the past few games,” Saints coach Don Goodreau said. “We will have to build on this to finish out the season on a strong note. We have games coming up that we can be highly competitive in.”
St. Mary’s will look to get back on track Saturday against Greenfield at Collins-Moylan Arena at 3 p.m.