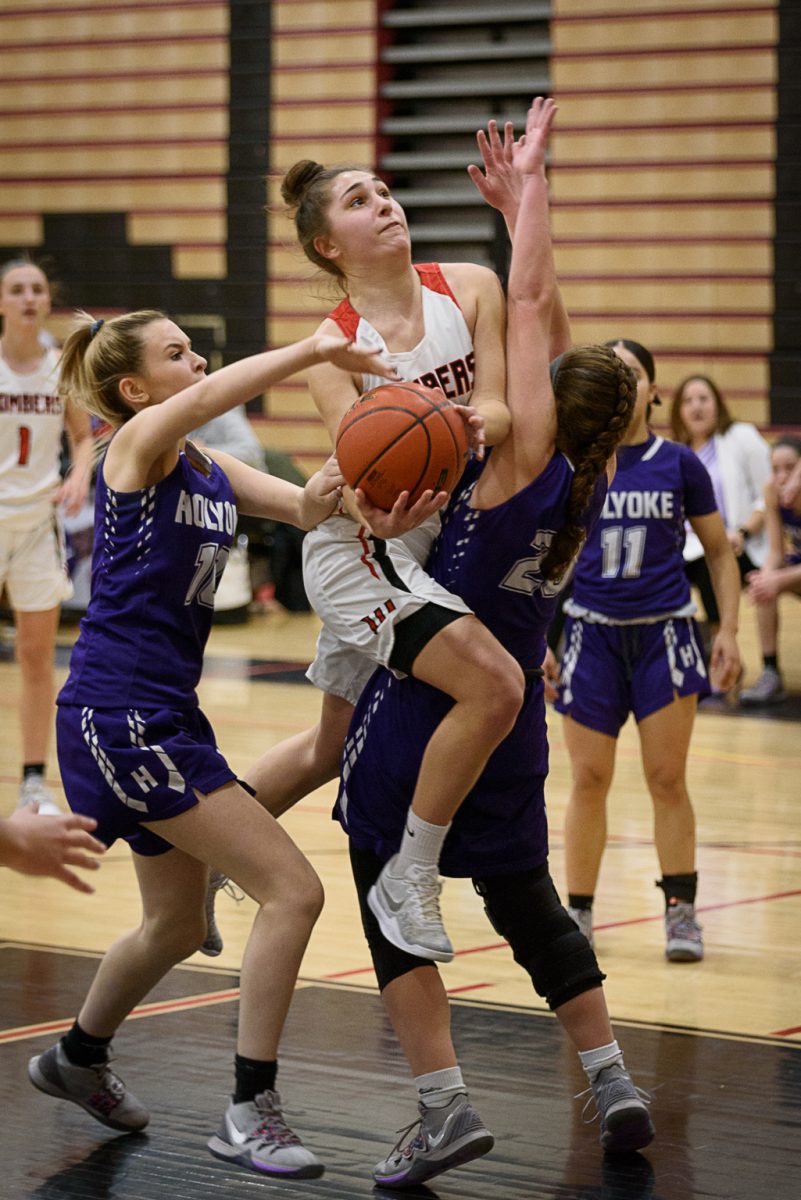 WESTFIELD – During the first half of Thursday night’s West Division 1 girls basketball quarterfinal matchup, a headline quickly emerged.
It would have went something like: “Perez, Purple Knights Own The Night,” but then something magical happened.
Instead, Westfield senior Olivia Hadla and the Bombers made the run of a lifetime, emerging from a first-half slumber to storm back against the Holyoke Purple Knights (11-10), energizing a frenzied, jam-packed crowd at Westfield High School.
Hadla knocked down 13 third-quarter points, and No. 4 Westfield rallied from a 24-point deficit to pull within three points of a tie before tiring late. The Bombers fell to the fifth-seeded Purple Knights, 69-63.
“I think we came out wanting it more than them (in the third quarter) and that’s what really pushed us to get that (rally going),” said Hadla, who finished with a team-high 29 points.
Westfield trailed by as many as 24 points. 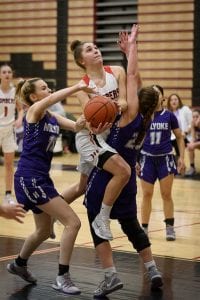 Sam Kaubris opened the third quarter by draining a 3-pointer to cut Westfield’s third quarter deficit to 40-23. Holyoke’s Ashley Vazquez (18 points) responded with three points of her own, making 1-of-2 from the free throw line and a 2-point bucket.
Kaela Mochak (18 points) made two free throws before Holyoke’s Bianca Ortiz countered with a made 2-point shot.
Hadla started a 10-0 Westfield run with back-to-back baskets, including a 3-pointer. Chandler Pedolzky followed with a made free throw and a 2-pointer. Hadla converted two free throws to pull within 45-35.
Vazquez halted the run with a 2-pointer. Westfield responded with a Hadla free throw and consecutive 2-pointers from Mochak and Emma Pedolzky. Westfield trailed by seven, 47-40.
Holyoke made four straight free throws – two each from Yamaya Perez and Taryn Ryan – to push the lead back to double digits, 51-40.
Emma Pedolzky and Hadla converted consecutive 3-pointers, and also each made a free throw in the waning seconds of the quarter to slice Holyoke’s lead to 51-48. Vazquez drew a foul with 2.8 seconds left to bump the Purple Knights advantage to five points heading into the fourth quarter.
Holyoke reclaimed a double-digit lead early in the fourth quarter, spreading the ball around to four different players. A 3-pointer from Perez with 5:54 remaining in the quarter made it 60-48, leading to a Westfield timeout.
The two teams exchanged a free throw before Mochak and Hadla made back-to-back buckets to make it 61-53. After Perez drove the lane for two, Mochak made two straight 2-point shots to climb within six. Perez made a free throw. Hadla followed with a lay-up. Perez made a free throw. Hadla made another two. Westfield trailed by just four with a minute to go, 65-61.
“I think that most of all our team energy is what brought us back,” Mochak said. “It’s what made us make that big comeback.”
The game was decided in the final seconds though when Holyoke sewed up the game though with two free throws from Vazquez and one from Perez.
Perez proved to be a difference-maker for the opposition, exploding for 25 points in the first half. She was limited to just two points in the third quarter, but made eight key points down the stretch in the fourth.
Perez made six 3-pointers, five of which came in the first half.
Despite falling to Holyoke, Westfield celebrated its first tournament appearance in several years. The Bombers finished with a record of 11-10.
“To make playoffs for the first time in a while in our senior year, that’s definitely the way to top it all off,” Hadla said. “We always say we wanted to leave it better than we found it. I think we definitely did that.”
Mochak agreed.
“Me and other seniors have been playing together since we were in elementary school,” Mochak said. “We talked about since we’ve been playing this program we were going leave a legacy. As seniors, we were going to make the program better for the next year, and I think we did that.”