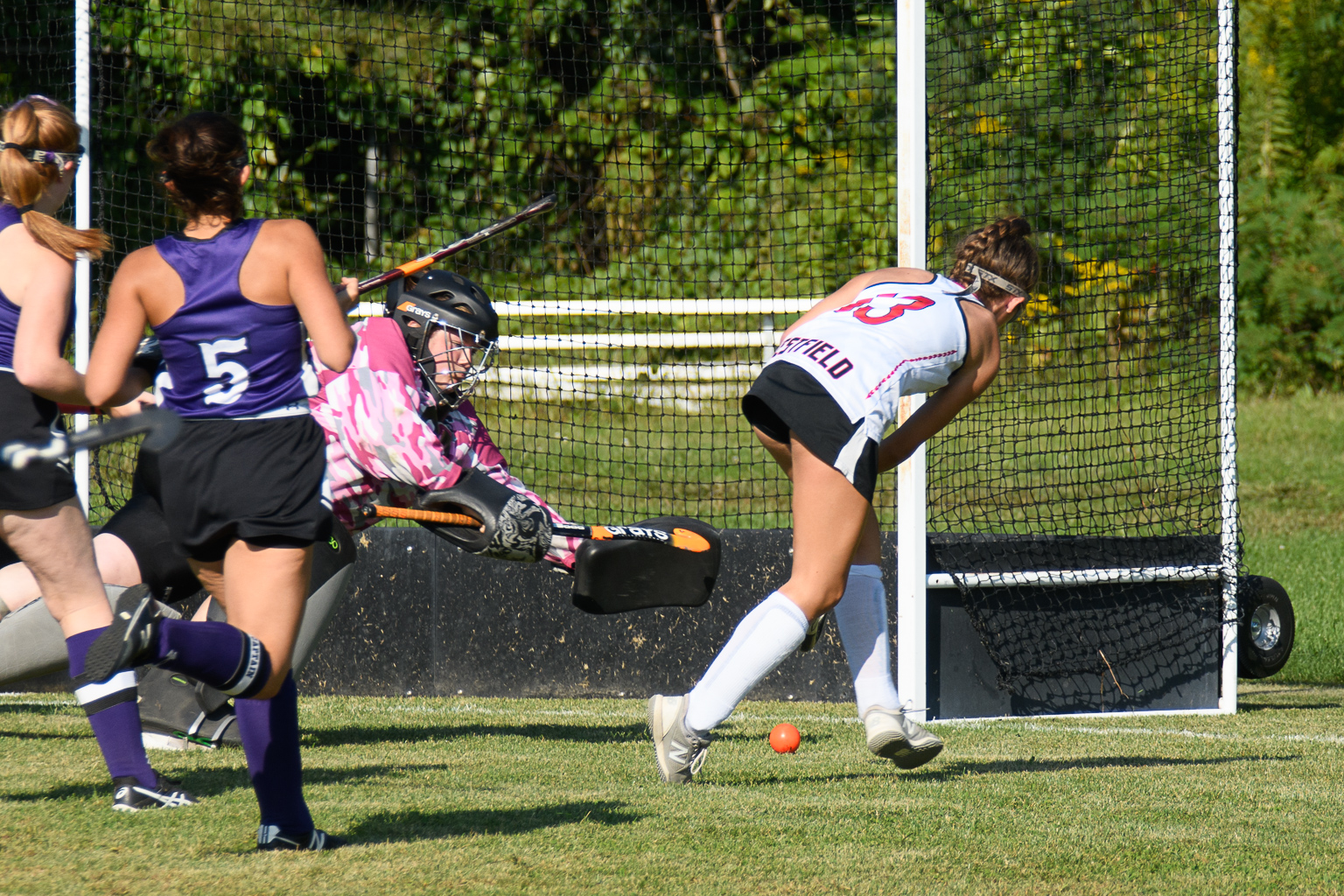 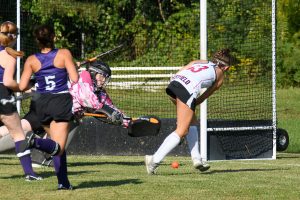 WESTFIELD – If Smith Academy has recurring nightmares in the days and weeks ahead, it is likely due to one very pesky field hockey player at Westfield High School.
Westfield High hockey junior forward Meghan Bowen scored not one, not two, but three goals in a 3-3 tie against Smith Academy in a home game Monday.
“Meghan is definitely one that will do anything to get a goal,” Westfield Bombers head coach Courtney Albee said. “She will dive; she will get in front of any player to get that goal. She just knows she’s always at the right place at the right time and she knows how to do that.”
Bowen made her presence felt from the get-go, scoring the game’s first goal in the 11th minute. Gabi Ritter assisted.
Smith Academy tied the game with 3:10 remaining in the first half when Bailey McCoy tallied the Falcons first score. Elena Baranowski received the assist.
Determined to regain the lead in the second half, Bowen netted a go-ahead goal off a pass from Norah Bargatti. The score came with 7:53 remaining in the third quarter.
Smith Academy angled to go ahead, attempting a penalty corner. Westfield’s defense prevailed. The Bombers then had a penalty corner of their own but the Falcons’ defense thwarted the attempt.
A few moments later, Westfield peppered the Smith Academy goal. The ball hit the far post but ricocheted away from the net. The Bombers drew a penalty corner but missed a tap-in. The Falcons also soon had a penalty corner chance nixed.
In the fourth quarter, Smith Academy surged ahead with two goals within a 1-minute, 12-second span. Maisy Dyer scored a game-tying goal with 12:04 remaining in regulation. Cat Kokoski assisted. The next goal came on a penalty shot and resulted in a one-goal lead for the Falcons.
Smith Academy’s Makena Valentine rang a penalty shot high off the left post. The ball ricocheted around like a pinball before spinning into the back of the net. The Falcons led 3-2 with 10:52 left.
The Bombers would not be denied.
Bowen broke through with another goal, completing the hat trick with just 5:54 remaining on the fourth quarter clock. Annie Adams assisted.
“You just got to take the shots,” Bowen said. “Any shot you can see that ball you’ve just got to hit it, you just got to go for it, diving, whatever, knees or grass, you have to go for it.”
It is that spirit that helped Bowen and the Bombers avoid a crushing defeat in the waning moments of the game.
“They don’t hang their heads at all,” coach Albee said. “They know that when it’s time to win they want to get it done and they’ll do whatever they can – – diving for a goal, anything to get a goal.”
Ultimately, in the end, it was that same mentality on defense that allowed Westfield to escape unscathed.
Smith Academy made a late push, receiving an untimed penalty corner with the clock reading 00:00. Westfield’s Lilly Taglieri broke up the play and Sydney Hines cleared the ball to preserve the tie.
Westfield goalie Lindsey Brown was critical to her team’s success, finishing with nine saves.
“Lindsey started to get back into her groove,” coach Albee said. “She was very proactive and went after the ball as much as she could. She wasn’t waiting for shots at her; she was always going toward the play which was great.”
Bowen was optimistic for continued success. “This was a huge game for us,” she said. “I think we took it pretty well. I think we can do it for the whole season.”
Westfield embarks on a three-game road trip, beginning Wednesday at Turners Falls followed by road contests against Northampton (Sept. 17) and Southwick (Sept. 21).

GOLF
MacIntosh’s career best 39 lifts Bombers
Westfield 160, Agawam 163
Anthony Schabowski and freshman Brian MacIntosh each shot a 39 to help Westfield (1-2) slip past Agawam at Agawam Municipal Golf Course.
“My coach was saying today was a very important match,” MacIntosh said. “I had to pull through for the team.”
It was a career-best outing for MacIntosh, who birdied on the sixth hole. “My chipping and putting was very well today. I am just looking forward to a good season. I have to keep playing golf and keep getting better.”
Bombers’ Joey Calderella and Joey McCormick shot 41 apiece.

Sat., Sept. 11
BOYS SOCCER
A wild tie
Westfield 5, Amherst 5
What a game!
Amherst scored in the second minute off of a corner kick when Alex Auer found the back of the net. Jack Fortier drew a penalty a minute later in the third minute and converted the game-tying goal.
Fortier drew another penalty in the sixth minute and converted. Amherst tied it up in the 11th minute when Jamie Park sent in Carlson Rose to make it 2-2.
Amherst took the lead in the 34th minute when Auer found Jonathan Klein at the top of the box for a shot. Westfield countered when Jeremy Edelson buried a header off a corner kick from Vasco Sardinha in the 38th minute.
Westfield made it 4-3 a minute later, in the 39th minute, when Sardinha stole a back pass meant for the Amherst kicker and buried it.
Amherst cut its deficit to one, 5-4, on a Park score from Rose in the 59th minute. Jack Semler made it 5-5 on an assist from Arther Vickery.
Westfield goalie Aiden Van Oostveen and Amherst keeper Yahsiel Devi Dalomba each made five saves.