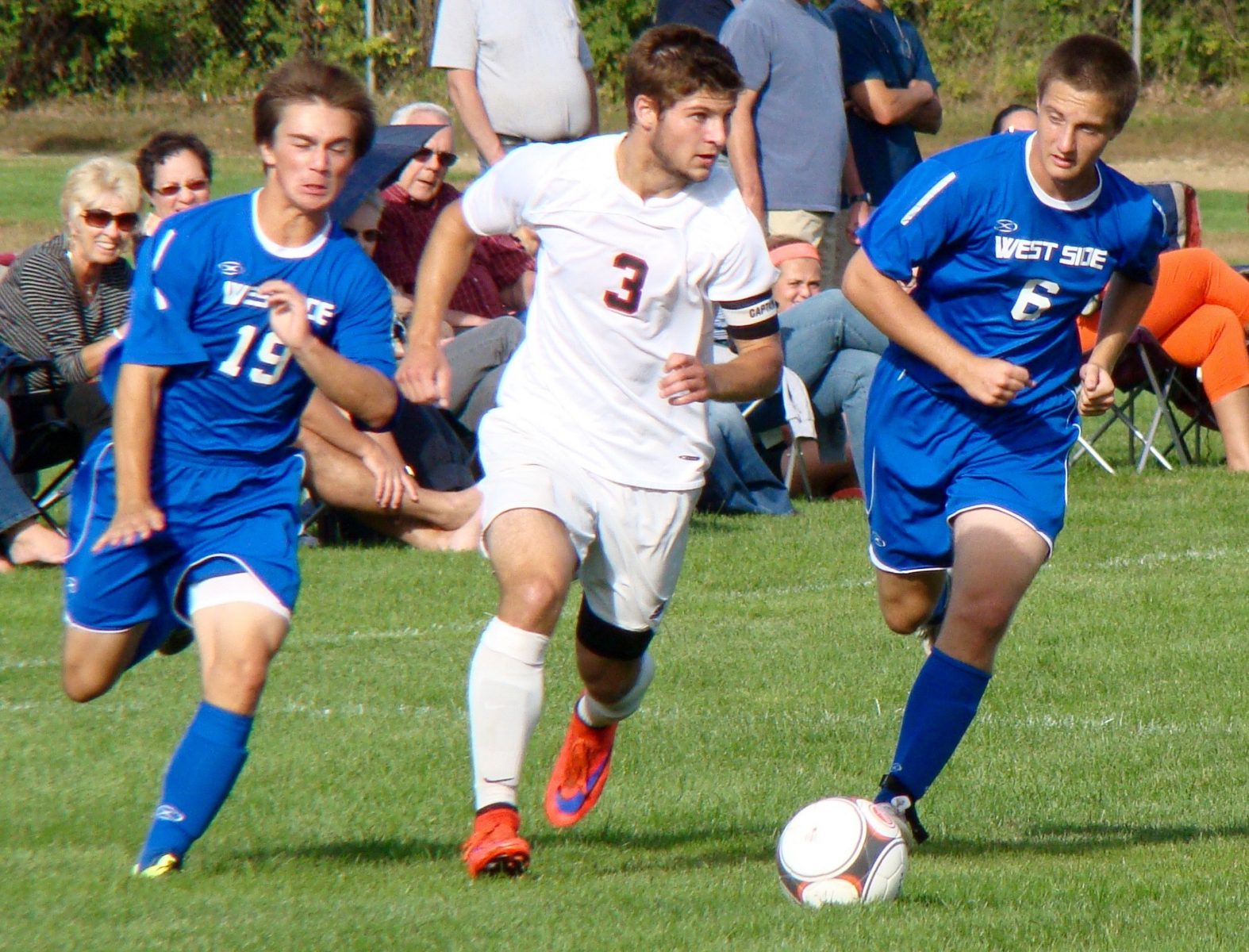 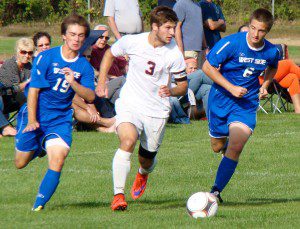 Bombers’ Matt Butera attempts to split a pair of West Side Terriers Friday at Westfield High. (Photo by Chris Putz)

WESTFIELD – Westfield received another dominating effort from Matt Butera en route to shutting out the visiting West Side Terriers 3-0 in a high school boys’ soccer game Friday.
Butera scored on a penalty kick midway through the first half, and Sam Winiarski and Dante White each added a second-half goal. Bombers’ Ran Prenosil assisted on both second half goals.
“We played an awesome game,” Westfield coach Andrew Joseph said. “We were very physical, we moved the ball very well, and we executed on a couple of our opportunities, and that made a difference … All around it was a very, very solid effort from our team.”
The Bombers coach praised Butera in his post-game remarks.
“Again today Matt Butera showed why he is one of the best players in the area for sure,” coach Joseph said.
Westfield will turn its attention to Monday when the Bombers travel to Wilbraham to take on the Minnechaug Falcons at 4 p.m.

Tigers explode past Pioneers
Westfield Technical Academy 8, Pathfinder 0
Westfield Tech scored five goals in the first 10 minutes to explode past Pathfinder.
“The guys came out on fire,” Tigers coach Kyle Dulude said.
Alex Stepanchuk and John Goretskiy scored two goals apiece, Dominic Rosario finished with one goal and three assists, and Jeremy Kovylyak, Kirill Ohkrimenko, and freshman Eduardo Borodin (his first in varsity play) each scored once.
Sergiy Kabysh had two assists.
“It was a great team effort,” Dulude said. “Everyone got playing time today … a lot of support for every member of the team.”

Mahar nips Gators
Mahar 1, Gateway 0
Mahar scored the game’s only goal in the first half to hold off Gateway (3-3-2).

GOLF
Longhi, Rams soar past Saints
Southwick 21, St. Mary 3
James Longhi posted his third straight round of golf under par for Southwick (8-1, 6-0) with a 34 at Tekoa Country Club.
Rams’ Joe Stratton shot a 39.