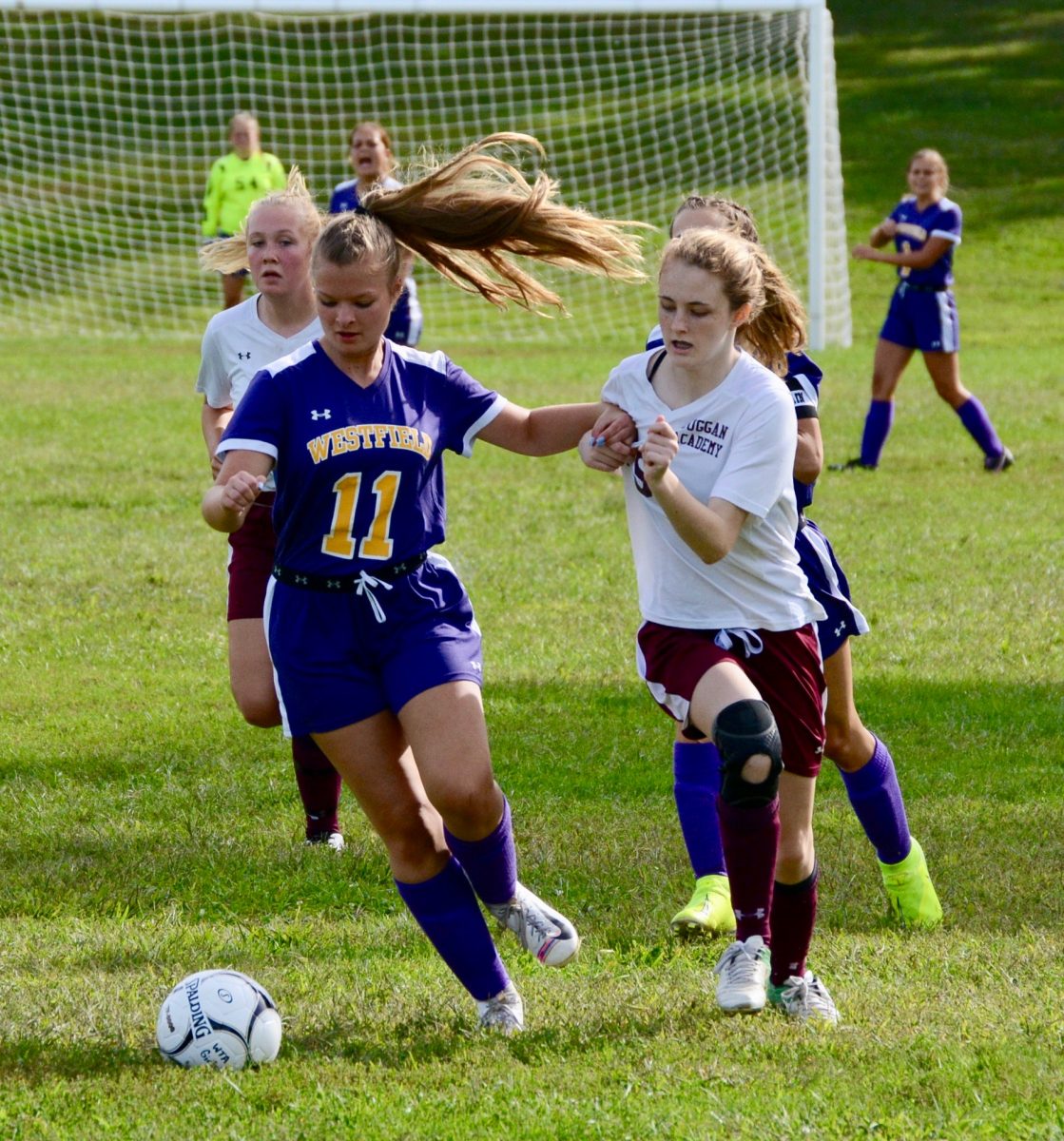 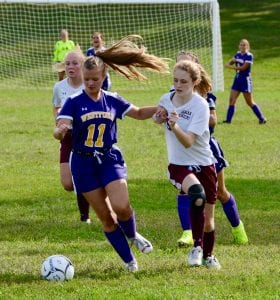 WESTFIELD – If at first you don’t succeed … scratch that.
Westfield Technical Academy sophomore goalie Caitlen Carter passed her first test, posting a shutout in her first varsity start in net as the Tigers and Duggan Academy high school girls soccer teams played to a 0-0 tie Thursday at Jachym Field.
Carter made six saves, including several key ones in a stellar debut outing.
“No balls went in so that’s what I’m proud about,” said Carter, who did not even know she was going to receive the start in goal up until the last minute after spraining her ankle five days before the team’s season – – and home – – opener. “It was a relief for the whole team.”
Early in the second half, Rhylee Kelly made a run for Duggan Academy, dribbling the ball in close to the net and shooting it into the near side of the net. Carter slide-stepped toward the ball while extending her arm to bat it away to preserve the scoreless tie.
”They were able to snap off a few, but Caitlen did a great job blocking them,” Westfield Technical Academy girls soccer head coach Lyle Washington said. “(Duggan has) got a couple of really good shooters on their team and we marked them up.”
Westfield Tech had a few chances of their own to break through on the scoreboard, especially in the second half when Jessica Bush managed to squeeze off a shot before the defense could react, only to have the ball sail wide. A few moments later, Bush had a shot go high.
Duggan responded with a shot late in regulation, but Carter came up with the save.
“We had a plan and we went with it, and it worked out for us,” coach Washington said. “I’m happy with a 0-0 tie.”
It was a marked improvement for Westfield Technical Academy. Last season, the Tigers were swept by Duggan Academy, who finished second in the Tri-County League.
There are other positive vibes among the Tigers as the Westfield Tech roster is expected to get a boost with the addition of a couple new players early next week.
“We just have room to grown from here,” coach Washington said. “We’re in good shape.”

St. Mary’s 3, Hampden Charter School of Science 3?
St. Mary’s Lady Saints tied the two-time division champ Hampden Charter in each team’s season opener at Westfield Intermediate School.
Eighth grader Emma Goodreau notched two goals and sister Allie Goodreau (sophomore) had a goal and assist to lead the offense. The Lady Saints created numerous opportunities putting up 22 total shots. Freshman Emma Bialas and seventh grader Elianna Umana Kimura each picked up their first varsity point (in their first varsity game) with an assist each, respectively.  Amelia Willenborg was stout in the net with 12 saves.
“We had some tough luck with injuries throughout the game to key players and had some defensive miscues, which are to be expected from the first game of the season, but the girls really competed hard,” St. Mary’s coach Pat Olearcek said.
St. Mary’s rallied from deficits three times in the game.
“Each time they showed the mental and physical fortitude to complete the task,” coach Olearcek said. “We are so young – – 15 girls out of 19 total players are 10th grade or below – – again this year, and physically some of the girls are smaller in stature, but they showed such grittiness and effort that the future should be bright with a few adjustments.” – Pat Olearcek contributed to this report

BOYS SOCCER
Southwick 4, Gateway 1
Nick Brown recorded a hat trick, and Paul Whalley had a goal and an assist for Southwick. Rams’ Anthony Diaz also earned an assist.
Whalley netted the first goal of the game. Brown registered the next three for their team.
Jake Thayer had the lone goal for Gateway. Gators’ Joe Sakaske assisted.