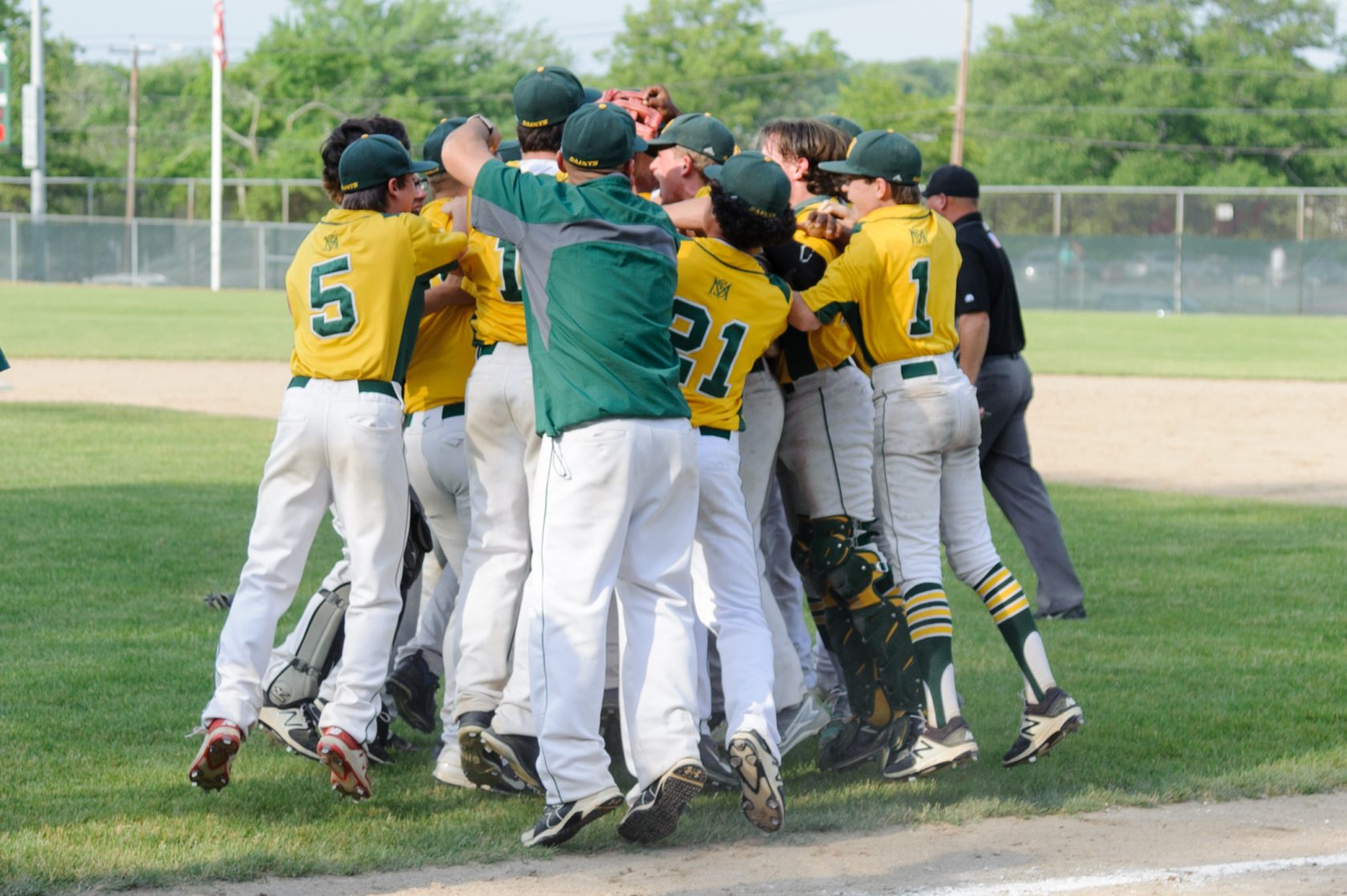 WORCESTER – And just like that, the Tahonto Stags perfect season is – POOF – over!
The St. Mary Saints ended Tahonto’s run of perfection, defeating the previously unbeaten Stags in a state Division 4 baseball semifinal 4-0 Tuesday at Lake Park’s Tivnan Field.
St. Mary (22-2) scored one run in each of the first four innings, pitcher Nate Bonini (4 Ks) tossed a complete game shutout, and the Saints put on a flawless display of error-free defense.
“We’ve been a very solid defensive team all year,” Bonini said. “To win, that’s how we’ve got to play.”
Shaun Gezotis got things started for St. Mary with a one-out triple in the top of the first inning. John Daley’s clutch two-out single made it 1-0.
N 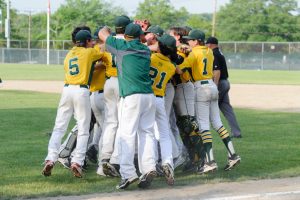 The celebration is on after the St. Mary’s Saints defeated the Tahonto Stags 4-0 in a Division 4 baseball state semifinal Tuesday at Tivnan Field in Worcester. (Photo by Bill Deren)

third base on a wild pitch, and scoring on a bases-loaded fielder’s choice (a hard hit ball from Jake Butler).
Other than a harmless single in each of the first and second innings and again in the fifth and sixth innings, Bonini had relatively unparalleled success on the mound. At one point, beginning with the second out of the second inning, Bonini retired nine straight batters (two by way of the K).
Tahonto (22-1) put runners on first and second – thanks to a Ben Gugliemino double and Ross Herrick single – with no outs in the bottom of the seventh, but Bonini came back to force a fly out and turned a 4-6-3 double play to end the game.
“We got here, we did what we do,” St. Mary coach Troy Collins said. “We showed up, played a nice, clean baseball game, Nate pitched fantastic, we hit situationally – we left some runners on base – but we were able to score each of the first four innings which was good to keep pressure on the other team. We just didn’t give them anything and when you do that in baseball, it’s tough to lose.”
“Tahonto beat everybody they came up against,” Collins added. “That in itself is a tall task when you get here. You’re playing against a team nobody’s been able to beat. Today we got it.”
Coach Collins dedicated Tuesday’s victory to his friend Kevin “Bear” Halloran, a Westfield resident who passed away recently at the age of 55. Halloran was a Boston sports fan and supporter of local sports, especially Westfield Youth Hockey.
“That’s for ‘The Bear,’” coach Collins said. “Long live ‘The Bear.’”
St. Mary advances to play the winner of Lowell Catholic-Archbishop Williams Saturday at Holy Cross. Time TBD.
“It means everything,” said Butler, who finished 2-for-4 with two RBIs. “We’ve had an off year with sports, so baseball to come up and do it – it just shows we’re with any other school.”
Daley also finished 2-for-4.