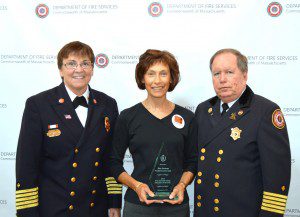 Tina Gorman, the director of the Westfield Council on Aging, is flanked by Westfield Fire Chief Mary Regan and Massachusetts Fire Marshal Stephen D. Coan, was she displays the 2013 Fire & Life Safety Educator of the Year Award she received recently at the 19th annual Public Fire and Life Safety Education Conference. (Photo courtesy the Department of Fire Services)

WESTFIELD – The director of the city’s Council on Aging has been honored by the state fire marshal for her work to help keep senior citizens safe from fire hazards.
In a news release, Stephen D. Coan, the fire marshal, reports that Tina Gorman responded to the deaths of four of the city’s senior citizens in fires by creating the ‘Retire the Fire!’ program and reports that Gorman was awarded a 2013 Fire & Life Safety Educator of the Year Award in recognition of her efforts.
Coan said that Gorman worked with his office, the city’s fire department and municipal leadership and found sponsors, Rocky’s Hardware and The Westfield News, to bring “a full court press on fire safety for older adults” during the week in March when Daylight Savings Time begins each years.
Firefighters have long advised that batteries in smoke detectors be exchanged when clocks are changed and one of Gorman’s goals was to ensure not only that senior citizens have working smoke and carbon monoxide detectors in their homes but that the batteries in them are replaced regularly.
Gorman used flyers, bi-lingual news articles and the mayor’s cable television program to educate the public about fire safety issues, especially as they relate to the city’s senior population.
In addition, Gorman organized one-on-one outreach to senior citizens at the Council on Aging and utilized Meals on Wheels volunteers to inform senior citizens of fire hazards in their homes and encourage them to install and maintain smoke and carbon monoxide detectors, Coan said.
The award was presented at the 19th annual Public Fire and Life Safety Education Conference last week for firefighter-educators, senior workers, classroom teachers and injury prevention experts.
Coan pointed out that, since 1995 his office has conducted a school based program, Student Awareness of Fire Education (SAFE), which has contributed to a 71 percent decrease in child fire deaths and said that the new Senior SAFE was the focus of the conference in an effort to effect similar decreases in senior citizen deaths due to fires.
The conference featured speakers, including Gorman, who discussed options to increase the safety of senior citizens from fire hazards and also included workshops on ways to target and assist various at-risk segments of the population.