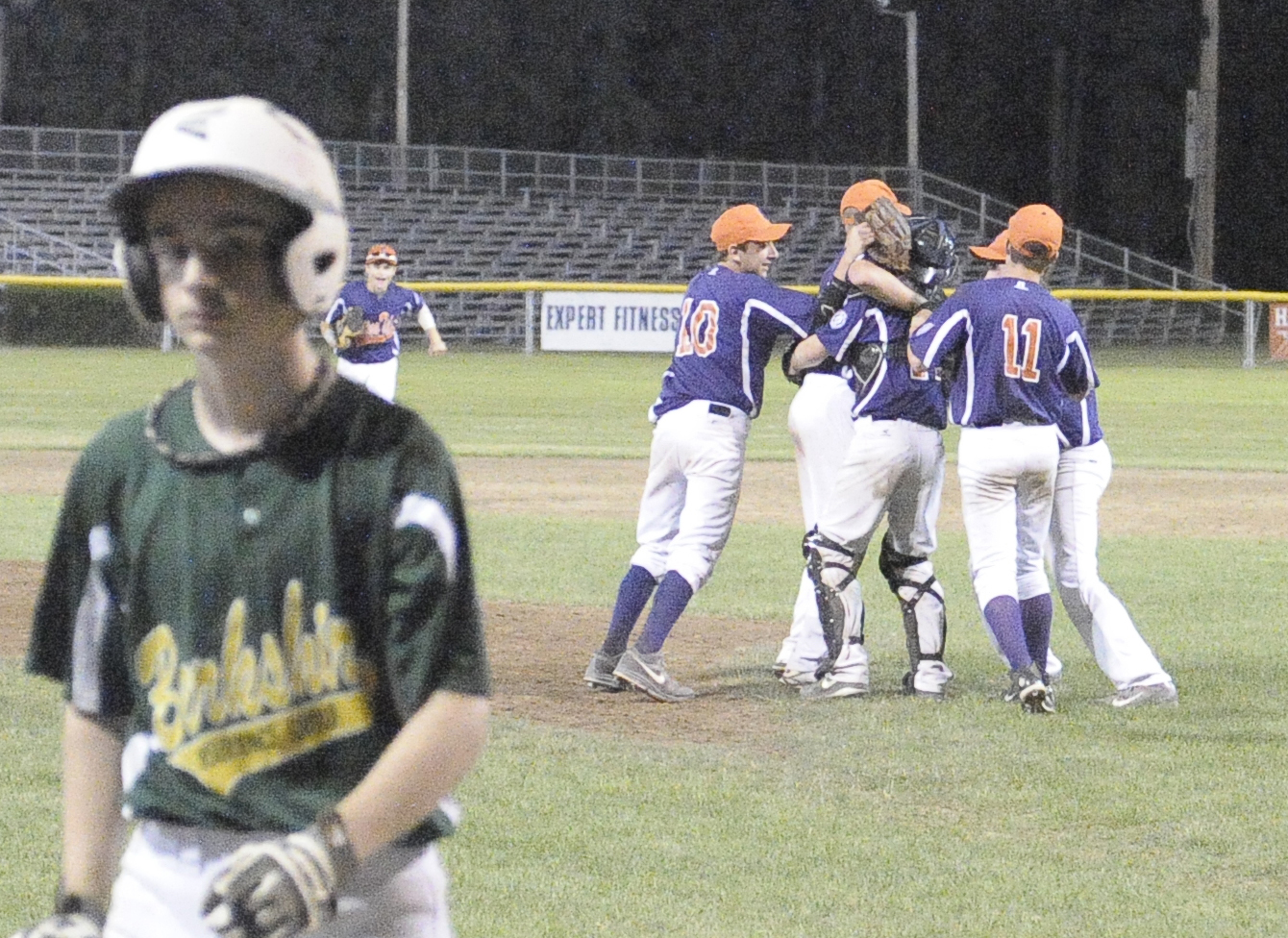 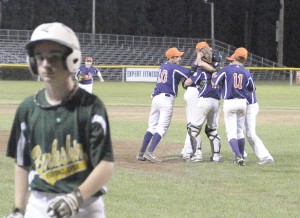 Members of the Cortina Tile team, background, celebrate their 7-3 win over the Berkshire Insurance Group during Wednesday night’s Babe Ruth game which went into extra innings. (Photo by Frederick Gore/www.thewestfieldnews.smugmug.com)

WESTFIELD – With massive thunderstorms threatening the area, No. 2 Cortina Tile struck with four runs in the top of the ninth inning to break the deadlock Wednesday night, defeating No. 1 Berkshire Insurance Group 7-3 in the Amanti Cup championship.
Starting catcher Jack Yvon knocked in four runs and earned the win by throwing three shutout innings to help force a winner-take-all showdown Thursday at Bullens Field.
“They came here knowing that they had win to play tomorrow. It’s all about getting to the finals,” said Coach Tom Fanion. “What a great game, both ways. That’s the way baseball should be played: a lot of hits, a lot of great fielding and a lot of great pitching.”
John Daley, Aidan Dunn and Yvon scored six of the seven runs for the visitors, who finally got to relief pitcher Kyle Roberts, who was pitching his fourth inning for B.I.G. 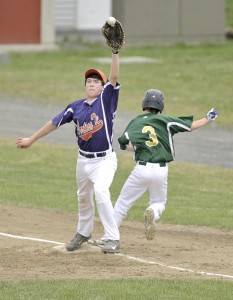 With one out, Ryan Rix and Daley walked and Dunn blooped a single to load the bases for Yvon. RBI walks from Yvon and Chris Boydin put Cortina ahead, while a sacrifice fly from Spencer Cloutier and a wild pitch broke the inning open.
Yvon accounted for the game’s first three RBIs, highlighted by a two-run double in the first inning, plating Daley and Dunn.
“I was just trying to go out there and get a nice little hit and chipped away,” said Yvon. “We knew that in the beginning that we only needed one. We got four and we came together as a group and did the job.”
B.I.G made their comeback in the home half of the sixth inning. Down 3-1, hits from Joe Raco and Billy Mollison started the one-out rally. Parker Kelley walked to load the bases and Brian Campbell walked home Raco, cutting the deficit to 3-2.
Mollison would come in to score on a dropped infield fly, sliding just under the catcher’s tag and tying the score, much to half of the crowd’s irate dismay.
Lost in the wild back-and-forth nature of the game was the Cortina pitching prowess. Yvon closed the game by striking out the side as part of three shutdown innings, but Boydin earned the start and held a potent B.I.G. lineup to one hit through his four innings of work, forcing his defense to make many key plays.
“I went out there and I just wanted to throw strikes,” said Boydin. “(I) didn’t let the pressure get to me and just had a heck of a game.”
Focus now shifts to 5:30 p.m. Thursday night, where the top two seeds in the 13 and 14-year-old Babe Ruth Division will play one more time for the championship. The goal is very simple.
“We’re all pumped,” said Boydin. “We want to get this done.”
The Dan Welch City Cup championship featuring Sons of Erin and McDonald’s will follow at 8 p.m.