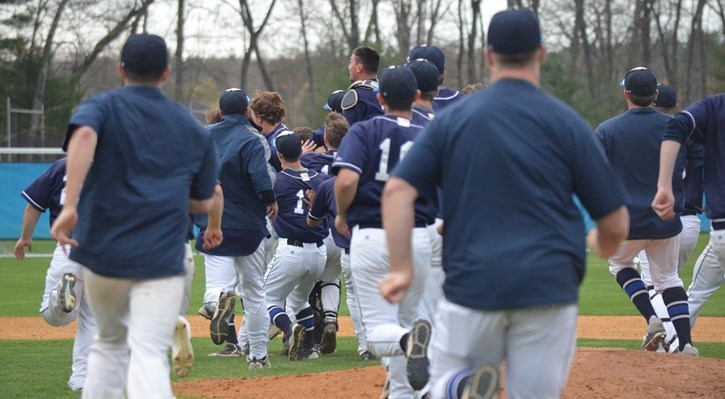 WESTFIELD – Former Westfield Bomber and current Westfield State sophomore shortstop Colin Dunn delivered a walk-off single in the bottom of the 10th inning to lift the to a 10-9 come-from-behind win over Eastern Connecticut State University in a non-conference baseball game at Bud and Jim Hagan Field on Thursday afternoon.
Westfield trailed the Warriors 8-3 heading into the bottom of the third inning.
“It’s indicative of the way our season has gone,” said Westfield State head coach Nathan Bashaw. “Our guys have battled, they grind out at bats and games, and we’re confident in our lineup.”
Dunn’s heroics came after Arismendy Larancuent (Westfield, Mass.) led off the bottom of the 10th with single in the hole to short, Tyler Beach (Quincy, Mass.) sacrificed Larancuent to second, and Eastern intentionally walked Owls’ slugger Anthony Crowley (Bellingham, Mass.) to set up a double-play situation. Dunn laced the winning hit to right center field, and Larancuent wheeled around third base to score the game-winner as his teammates poured out of the dugout in celebration.
Westfield State, ranked #5 in New England in the latest NEIBA coaches’ poll, improves to 22-4 on the season. Westfield State won its 13th straight game. Eastern Connecticut drops to 13-11 with the loss.
Westfield’s win over Eastern Connecticut was the 11th in 56 games against the perennial New England power.

“It was nice to get that win,” said Bashaw. “Does it count twice? They had handled us pretty easily the last couple of years, and both times we gave up a big inning against them. Today we gave up the inning but battled back.”
“That’s a great program, and they’ve been where we are trying to go, so that’s a big win for us,” said Bashaw about the Warriors, who have made 33 NCAA Tournament appearances and won three national championships.
Westfield State grabbed a 3-0 lead in the top of the first as Dan Rokitowski (Ketcham/Wappingers Falls, N.Y.) singled, John Lippincott (Northwestern Regional/Barkhamsted, Conn.) doubled, and Alex Lafayette (Ludlow, Mass.) launched a 3-run homer to deep left center field. Lippincott’s double extended his hitting streak to a school-record 16 games.
In the top of the third inning, Eastern’s Alex Zachary (Fermi/Enfield, Conn.) led off with a home run to left field, and the Warriors proceeded to have the first eight hitters of the inning reach base via base hit, and each came around to score. Collin Russell (St. John Paul /Sandwich, Mass.) delivered a 2-run single to tie the game, and the Warriors took the lead on an RBI single from William Coleman (North Branford/Northford, Conn.).
Westfield rallied with three runs in the bottom of the fifth, two on Dunn’s triple to left, then Lippincott plated Dunn with a sac fly to deep right field.
Westfield State tied the game at 8-apiece with two runs in the bottom of the sixth, as Jared Ferrari (Waltham, Mass.) walked, Larancuent followed a batter later with a base hit, and Beach doubled Ferrari home, and Dunn plated Larancuent with a base hit.
The Owls took the lead, 9-8, in the bottom of the eighth as Beach walked, advanced to second on a wild pitch, and later scored on an error.
Eastern forced extra innings by tying the game at 9-9 in the top of the ninth with base hits from Christian Budzik (Cromwell, Conn.) and DJ Scavone (Auburn, Mass.), and after Coleman sacrificed the runners to second and third, Merlyn Herrera (Cheney/La Yaquiza, P.R.), the number-nine hitter in the batting order, delivered a clutch single to score Budzik, Westfield State closer Tyler Tongue (Minnechaug/Hampden, Mass.) then worked out of the jam, getting a strikeout and a fielder’s choice to limit the damage.
Westfield State sophomore reliever Brian Hollister (Somers, Conn.) pitched a scoreless top of the 10th to earn his second win of the season. The Owls used three relievers to string together five scoreless innings (from the fourth to the eighth inning) to give the bats a chance to rally after the eight-run Eastern Connecticut uprising in the third inning.
“We’ve gotten so many good outings from our starters that we haven’t had to tap into our bullpen that often,” said Bashaw. “But they’ve kept us in games and those guys have stepped up when their number has been called.”
Dunn finished 3-6 with four RBI to lead the Owls offensive attack. Larancuent, Beach and Lafayette each registered a pair of hits for Westfield.
“Dunn has been playing well,” said Bashaw. “He’s been steady in the field and he had a great day at the plate today. He’s made huge strides from last year in driving balls, and has made all the small adjustments he needs too. It was his day today and I am happy for him.”
Eastern Connecticut sophomore reliever Jason Staub (Portland, Conn.) (0-2) was saddled with the loss, working the final 2-1/3 innings. Herrera finished 3-4 with two RBI, while Zachary, Scavone and Russell each had a pair of hits as part of the Warriors 17-hit attack.
Westfield is slated to host Western New England tomorrow at 3:00 p.m., while Eastern Connecticut will travel to Rhode Island College for a noon Little East Conference doubleheader on Saturday. – Courtesy of Westfield State University Sports