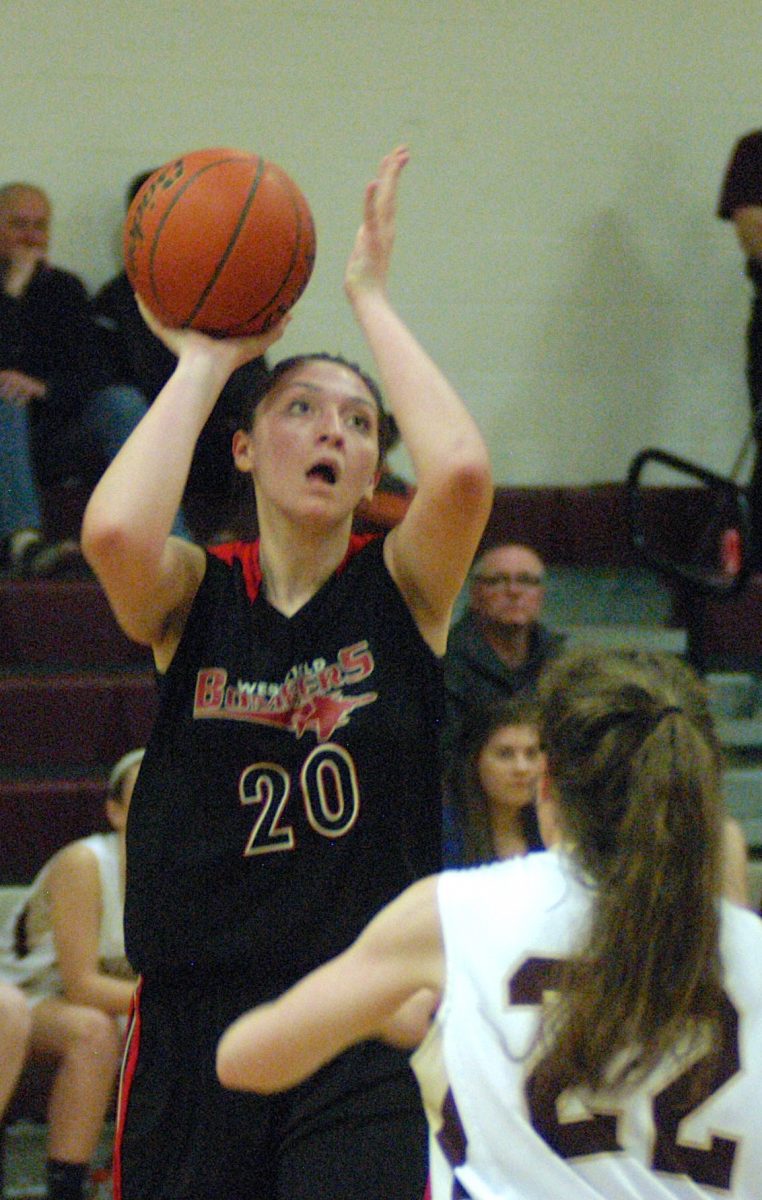 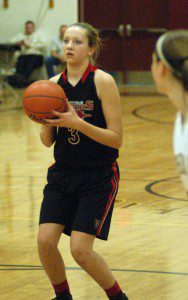 DUDLEY – In the blink of an eye, the high school basketball playoffs came to a crashing halt for a group of championship hopefuls.
In the span of 72 hours, the St. Mary, Southwick, and Westfield girls’ basketball teams dropped their respective postseason openers. The Bombers’ boys’ squad lost to Leominster Thursday night.
On Friday evening, No. 5 Westfield ran into a buzz saw on the road at Shepherd Hill. The fourth-seeded Fighting Rams turned away the Bombers, 71-48, in a Western Massachusetts Division 1 girls’ basketball tournament quarterfinal.
Shepherd Hill’s suffocating press on defense forced Westfield into several early turnovers, and a pair of sharpshooters proved too tough to handle. 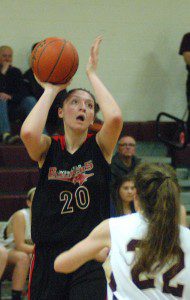 Westfield’s Alexa Morin (20) goes up for the shot. (Photo by Chris Putz)

Kendra O’Malley scored a game-high 23 points for Shepherd Hill, and Ciara McKissick finished with 18 points. Fighting Rams’ Caitlin Smith had 10.
Shepherd Hill (15-6) opened the game on a 8-0 run, fueled by three turnovers largely created by a full court press. Grace Templeton finally got Westfield (13-8) on the board with two made free throws 2 minutes, 11 seconds into the first quarter.
Shepherd Hill opened up a commanding lead over the next six minutes, and led 28-11 after one quarter. Westfield trailed 47-21 at the half.
Despite the large deficit, the Bombers finished strongly.
Westfield’s Alexa Morin (11 points) made a nice baby hook and converted a medium range jump shot in the paint on consecutive baskets late. Karly Mastello (8) completed an aggressive drive to the hoop for two points.
Alicia Arnold recorded 17 points for the Bombers. Arnold made five 3s.
TOURNAMENT NOTES: While the book has been closed for several local basketball teams this postseason, there is still another chapter to be written by a notable pair of boys’ ice hockey teams.
The top-seeded, defending WMASS D3 champion Westfield Bombers will collide with Agawam in a heavyweight boys’ ice hockey championship game next Thursday, March 5 at the Olympia Ice Center in West Springfield at 8:30 p.m.
The game figures to be another classic, and is likely to be a sellout crowd. The winner earns a trip to the coveted state Final Four, with a trip to the Fleet Center on the line.