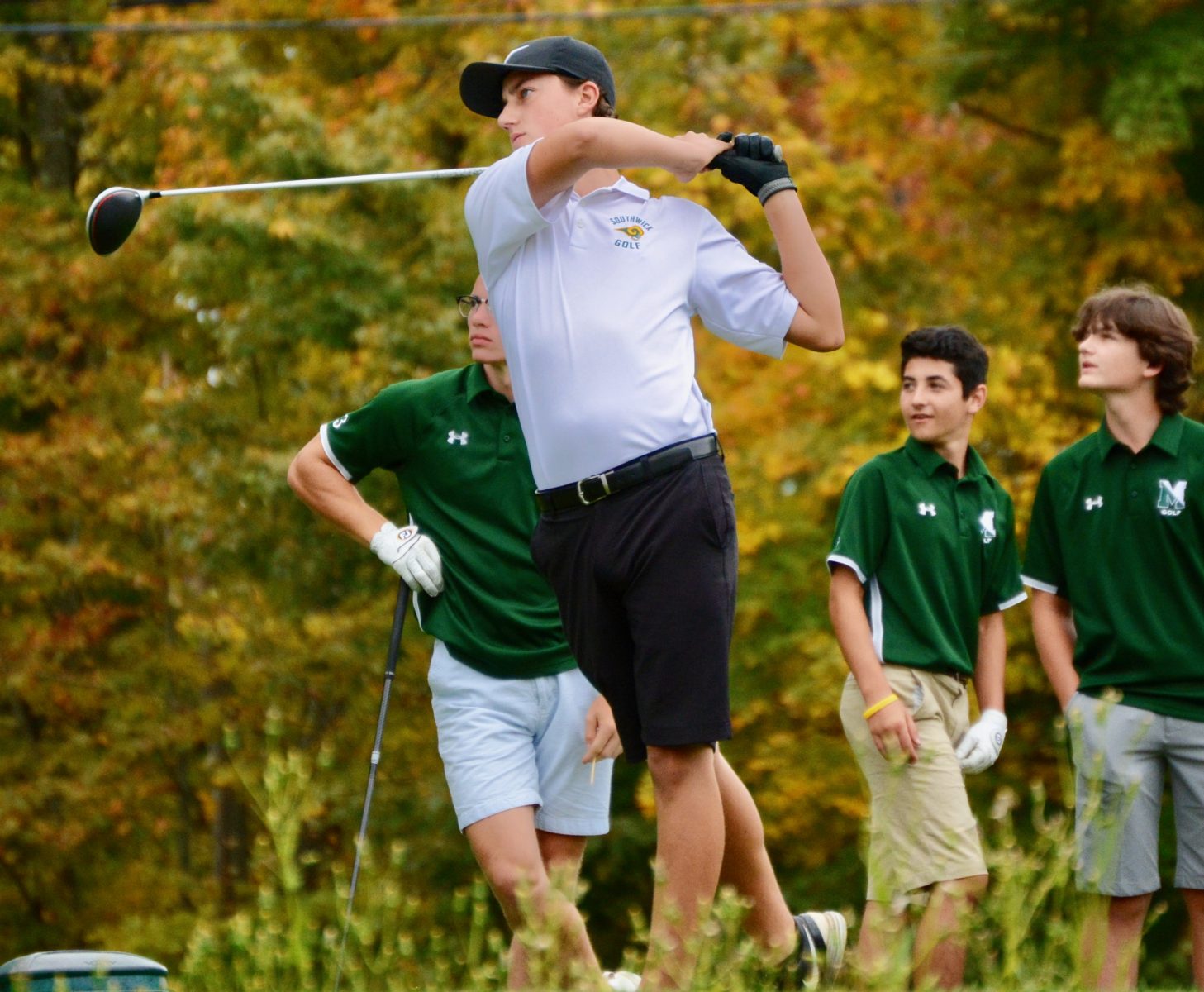 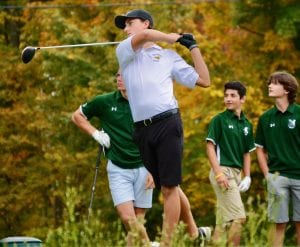 Southwick’s No. 1 golfer Matthew Garrity tees off on the first hole to begin Tuesday’s competition against Minnechaug at Wilbraham Country Club. (Photo by Chris Putz)

WILBRAHAM – Most high school golfers would be thrilled to have an “off” day like the one Southwick High School sophomore golfer Matthew Garrity experienced Tuesday at Wilbraham Country Club.
Garrity flubbed one hole and uncharacteristically failed to record a birdie in Southwick’s 193-173 loss to Minnechaug Regional, finishing with a 40 on the course’s par-36.
Southwick’s Jesse Johnson finished with a 48.
“It was a new course for most of us,” Garrity said. “We didn’t know the layout and the greens were difficult.”
The course was unforgiving. If the golfers failed to put the ball in the right place on the greens, it often rolled downhill resulting in an additional stroke.
“It was pretty treacherous,” Garrity said.
Southwick struggled with several putts. The Rams were also a bit unlucky.
Aside from Tuesday’s tough outing, Garrity has been outstanding this season averaging 37.7 through 13 matches. That is a full two strokes better than his average of 39.9 from a year ago.
Much of Garrity’s improvement can be attributed to a new swing he has introduced into his game, a swing that is a lot shorter and more controlled.
“My irons have been insanely better, a lot more consistent,” Garrity said. “My new swing can take away ball speed, but I’m willing to do that for more control and forgiveness.”
Garrity now has a bit more room for error if he happens to have a bad swing or makes poor contact with the ball.
“At this point in the season, I’m at the peak of my game,” said Garrity. “All in all, I have a lot more confidence in my game.”
Garrity qualified for the Western Massachusetts Division 2 golf championships with his performance against Minnechaug. Last season, he finished as the event’s runner-up.
This should come as no surprise to the young sophomore’s supporters who watched him climb to within two strokes of the lead on day one at the U.S. Kids Golf World Teen Championships at historic Pinehurst in North Carolina this past July. Garrity tied for 58th in the country among 14-year old boys at the competition.
Although Southwick fell to 8-5 with Tuesday’s loss, the Rams needed just one more win to qualify for WMass as a team.
It appears a lot is that a lot is clicking with this year’s squad. Said Garrity: “Everyone supports each other.”

GIRLS SOCCER
Westfield 6, East Longmeadow 1
Chandler Pedolzky recorded a hat trick, Catie Bean tallied five points (2 goals, 3 assists) and Westfield rolled to a convincing victory. The Bombers improved to 8-1.
Gigi Badger also scored for Westfield. Bombers’ Mackenzie Liptak and Emma Pedro each had an assist.
“It was a well-balanced attack,” Westfield coach Keith Saltmarsh said. “It was pretty decent defense except for the one we gave up. I’m happy where we’re at.”
Westfield goalie Adrianna Arona made six saves.

Southwick 7, Renaissance 0
Five different players scored to fuel Southwick’s resounding shutout.
Kayla Russ got Southwick started with goals in the 11th and 17th minutes. Amanda Belliveau, Malleigh McGivney, and Clare Hanna scored one goal apiece over the next 20-plus minutes to go up 5-0. Jordyn Demyon tallied a pair of insurance goals.
Sydney Demyon (2 saves) earned a shutout for the Rams.