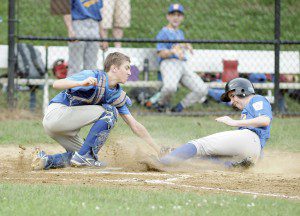 HUNTINGTON – June 21, 2013 was the official day of summer for people in the Northern Hemisphere. For a team of Little Leaguers in the hill towns bordering the Whip City, the summer season officially began with the first pitch of All-Star baseball.
The Gateway Little League Baseball Junior All-Stars opened play in the district tournament with an 11-4 loss to Southampton at home Wednesday. It was revenge for the visitors, who likely remembered a heartbreaking loss delivered by this band of future Gators just a few days before.
On Friday, Jayden Marge hit a walk-off single in the bottom of the seventh inning to lift the Gateway Juniors – pre-All-Stars – past Southampton 7-6 to secure a league title and championship victory.
Marge delivered an All-Star moment again Wednesday, gunning down a Southampton base runner at home plate on a sizzling throw from left field to catcher Tyler Heeter at home plate. Unfortunately, two batters later, Hunter Brooks delivered a two-out, three-run double to the right field fence that essentially secured Southampton’s victory.
Brooks doubled and scored the team’s 11th run in the sixth, and had an RBI single in the first inning to help the team build an early 6-1 lead. The big run in the first was a Garrett Kowal two-run liner through the right side.
Gateway had its chances, stranding two base runners in the top of the second inning, and leaving the bases loaded in the fifth. They enjoyed their only lead of the game in the first 1-0 with Joe Jones’ two-out single, and pushed two more across in the third to cut their deficit in half, 6-3.
In the third, Jones led off the two-out rally with a single and consecutive stolen bases. Trevor Bruno was hit by a pitch, and stole second. Garrett Bean, Nathaniel Bushor, and Tony Slowick drew consecutive walks, the latter two of which scored runs. A strikeout for the third out limited the damage for Southampton.
“We had our chances,” Gateway coach Paul Graham said. “We just couldn’t push the runs in.”
Jones was mostly effective in relief, getting out of a two-on, two-out jam with a strikeout to end the threat in the fourth, and allowing only one run (unearned) the rest of the way.
The Gateway Little League Junior All-Stars draw players from Huntington, Russell, Chester, Blandford, Montgomery, Middlefield, and Worthington, but have just two subs on its bench.
“Soccer has really hurt us,” Graham said. “We have so few kids to draw from.”
The sheer numbers alone pale in comparison to some of the youth ball clubs from Westfield, and elsewhere. Speaking of the Whip City, Gateway will travel to Westfield to take on the city’s All-Star Junior club Friday at Hampton Ponds. First pitch is at 5:30 p.m.
“Our players are going to play the best they can,” Graham said. “We basically need to play error-free to win. We will let the bats take care of itself.”