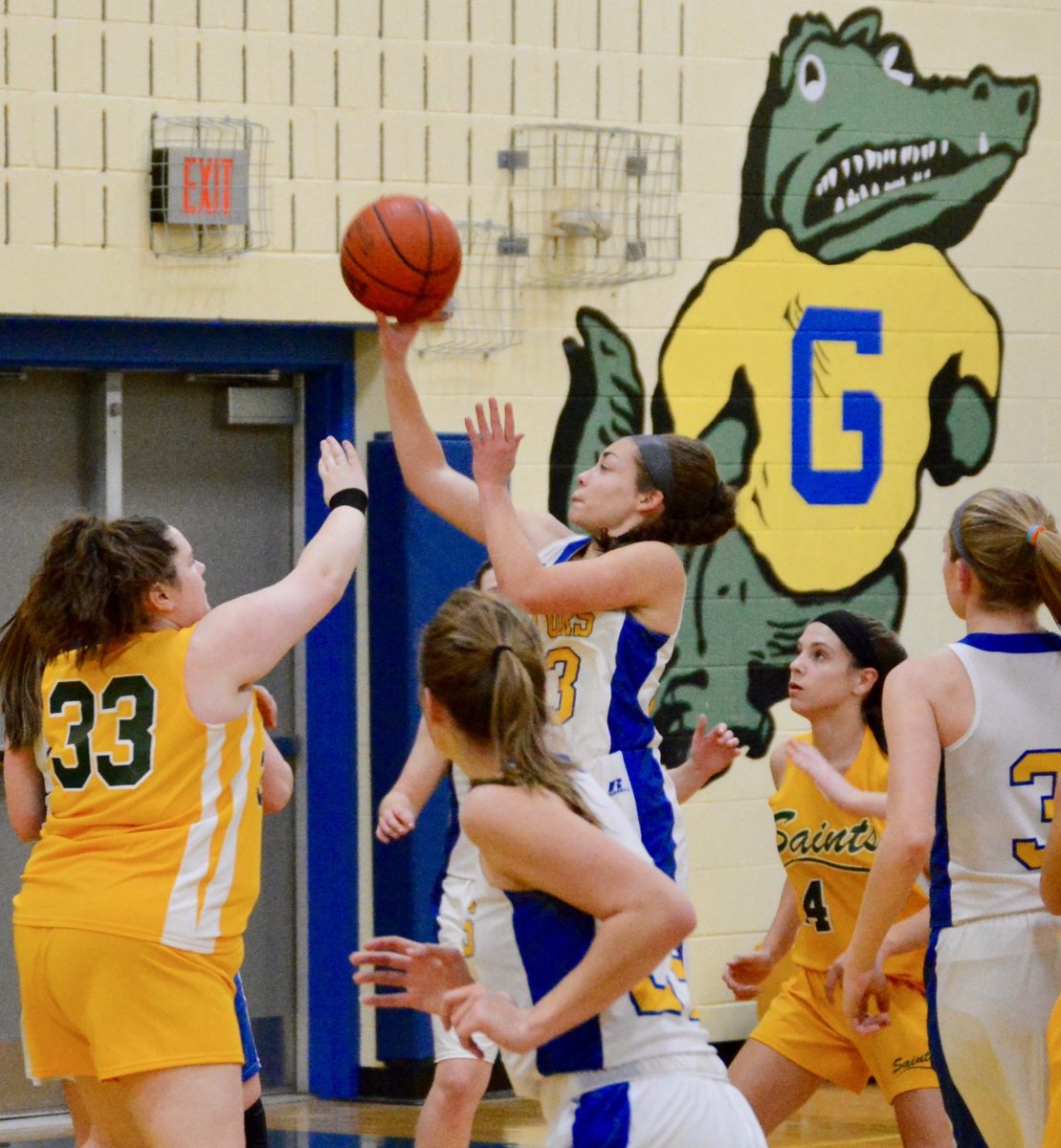 HUNTINGTON – Although it is possible that this weekend’s potential blockbuster winter storm could cause widespread power outages across a good portion of the region, it likely had little effect on the record low scoring first quarter in a high school girls basketball game Thursday night.
It might be less of a stretch to blame an absence of points on the recent cold snap.
Either way, points came at a premium for two local teams for the game’s first eight minutes. Then the drought snapped, the action heated up between the opponents, and a battled ensued until the bitter end. 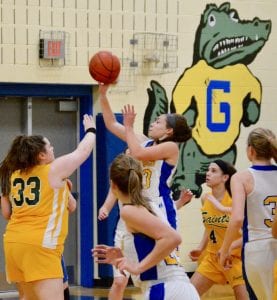 Gateway’s Becca Herman (23) attempts a one-handed floater in the middle of traffic. (Photo by Chris Putz)

Becca Herman exploded for 12 points in the second half, and Payton Bucko chipped in nine points to help lead the Gateway Gators turn back the St. Mary Saints, 32-25.
It was an awfully slow offensive start for both teams – or a defensive spectacle (depending on one’s point of view) – in the first quarter which finished with Gateway leading St. Mary’s, 2-1. Yes, that is correct, 2 to 1!
The offenses turned up the temperature dial in the second quarter with St. Mary’s outscoring Gateway 9-8 to knot the game 10-all heading into the halftime break.
Herman elevated her game in the second half, becoming more aggressive and going to the foul line 12 times. She converted six free throws and finished the game 8-of-14 from the foul line.
In the fourth quarter, Bucko drained a 3-pointer and made two key free throws.
Gateway’s Grace Van Buren contributed five points.
Amelia Willenborg and Madie Donais scored seven and six points, respectively, for St. Mary’s.

BOYS BASKETBALL
Smith nips Tigers in OT
Smith Voke 52, Westfield Tech 49 (2 OT)
Westfield Tech had a chance to win it in regulation with two little bunnies in the paint that did not fall; another opportunity in the first overtime, going just 1-of-2 from the free throw line with basically no time left on the clock; and, again in double OT when the Tigers had two shots fail to drop to tie it.
“It was a great game, very entertaining,” said Westfield Technical Academy boys basketball head coach Kyle Dulude, whose team led late in regulation before Smith rallied.
Colin Earle made 5-of-6 free throws in overtime for Smith, which went to the foul line 12 times over the extra frames.
“Those free throws may have been the real big difference in the end,” coach Dulude said. “I am hoping our guys bounce back next game in the same effort. It is critical that we don’t dwell on such a tough loss.”

CORRECTION:
Jack Lamirande was misidentified in the Tues., Jan. 15 edition of The Westfield News. Lamirande scored 12 points against Pathfinder in a high school boys basketball game.