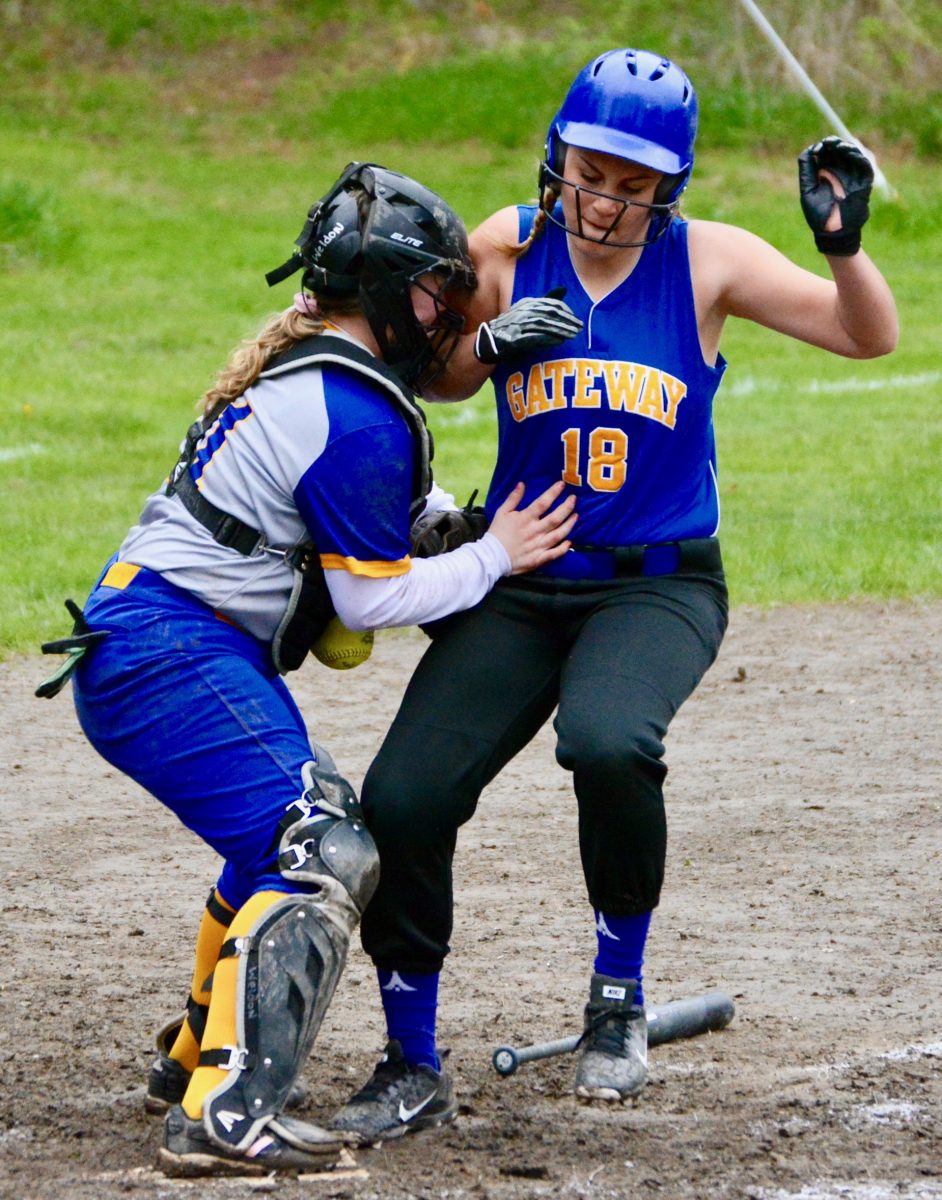 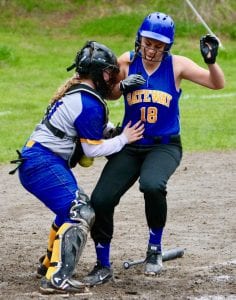 Gateway’s Lily Ryan (18) beats the tag at home plate as the ball pops out of the glove of the Pathfinder catcher Thursday. (Photo by Chris Putz)

THREE RIVERS – One inning lasted nearly one hour, but it was well worth the wait for the Gateway Regional High School softball team.
The Gateway Gators exploded for 15 runs in the fourth inning en route to a 23-17 win over the Pathfinder Pioneers on the road.
“That made the difference today,” Gateway softball coach Matt Bonenfant said, regarding his team’s fourth-inning explosion.
Steph Paiva led the offensive onslaught for Gateway, piling up three hits and four runs. She also threw two base runners out at second base from behind the plate.
“We played a lot of small ball, a lot of bunts,” coach Bonenfant said.
Five out of the six infielders Thursday, including the battery were all freshmen. Said Bonenfant: “The young ones stepped up and we got a win.”

BOYS LACROSSE
Boss fires up St. John’s victory
St. John’s 8, Westfield 6
Owen Boss scored a game-high four goals, and St. John’s held off Westfield at Roots Athletics Center.
Nick Clausen had two goals for Westfield. Bombers’ Matt Bacon and Will Cameron each had a goal and an assist; Tyler Shrewsbury and Kris Meneses scored one goal apiece.
Westfield goalie Nick Mee finished with 14 saves.
Despite the loss, several others made key contributions for Westfield, including Gavin Carzello, who was all over the field on defense and in the clearing game; Meneses, who played aggressively on defense; and, Tyler Shrewsbury and Aidan Boyle, who each made several strong plays on defense.

GIRLS LACROSSE
Golden Eagles down Saints
Central 14, St. Mary’s 2
The Golden Eagles put together a 6-0 lead before the half, and soared past the Saints (1-9, 0-5).
St. Mary’s Katarzyna Wisnauckas scored two goals, Skyler Duda had one assist, April Warner (7 saves – 1st half) and Paighton Ramos (4 – 2nd half) combined for 11 saves, and Samantha Moran had two interceptions.