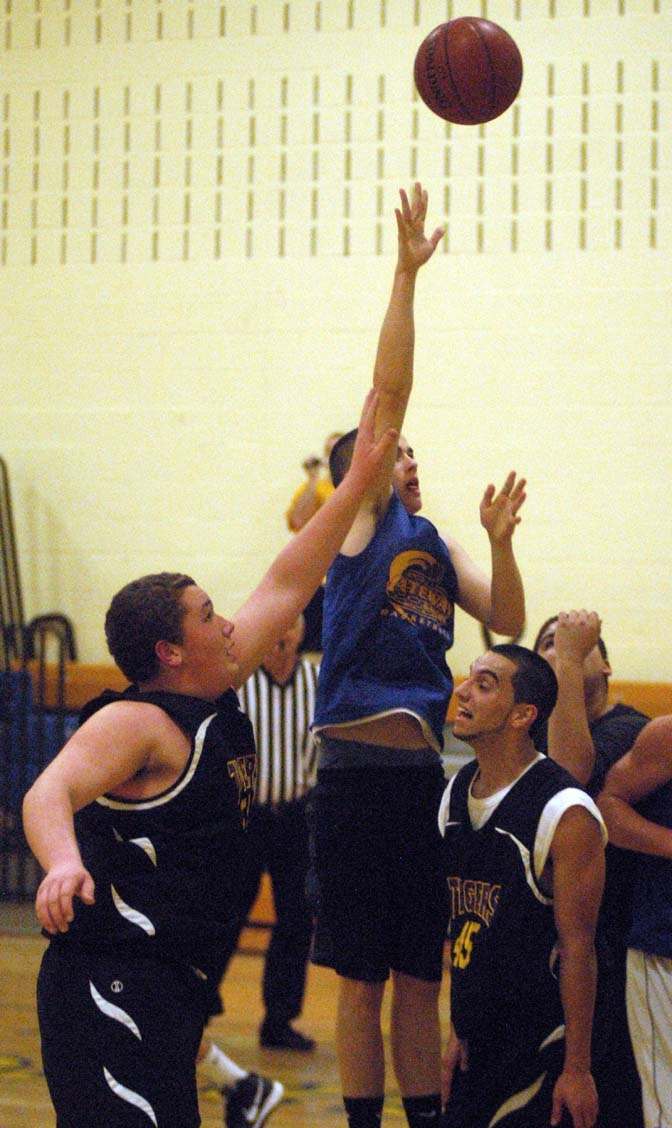 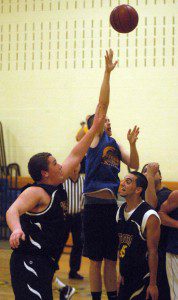 Gateway sets up its offense for this shot against Voc-Tech in a scrimmage Monday night in Huntington. The Gators open their 2012-13 boys’ basketball season at Belchertown on Thursday. (Photo by Chris Putz)

HUNTINGTON – While their scrimmage partner, Westfield Vocational-Technical, does not open its season until January, Gateway was a bit more pressed to tighten up in all phases of its game Monday. The Gators were just a few short days away from their Thursday opener at Belchertown against the Orioles.
“We have two senior captains and four juniors … that I think can play with anybody,” Gateway coach Mike O’Connell said. “Unfortunately in our league, everybody is back.”
O’Connell said Bi-County opponents, Palmer, Monson, Ware, Renaissance, Hampshire, and Belchertown each pose a different challenge to his team. 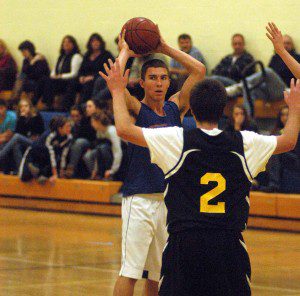 Gateway seeks an opening in the Westfield Voc-Tech defense. (Photo by Chris Putz)

“There won’t be one night we can take it easy,” the Gators’ coach said. “But at the same time, we know we’re not going to walk in and get it handed to us.”
Senior co-captains Ryan Fisk, a power forward, and small forward Zach Mackechnie will join junior guards Calvin Dowers, Curtis Dowers, Justin Edinger, and center Mike Arel, also a junior. All six players, who started alongside each other in various line-ups last season, are all expected to contribute heavily in this next go-round.
“They push each other,” O’Connell said of his group of returning players, primarily made up of three-sport athletes who also play soccer and baseball together. “This group is tight.”
“In practice, they’re pushing, shoving, and wrestling for the ball. But the next moment, they’re high-fiving and fist-pumping. It’s great.”
Gateway will open with five games against Division 2 opponents, playing independent contests, two of which includes matchups with St. Mary, before the league schedule tips off. The Saints are now coached by former longtime Southwick coach Joe Molta, and feature electric guard Justin Crosby, who transferred from Westfield High.