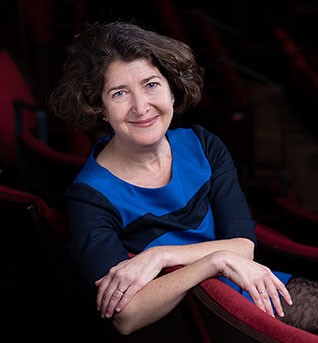 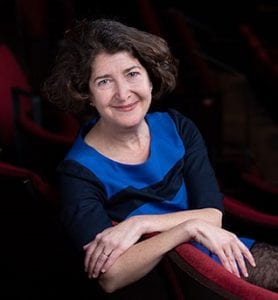 Melia Bensussen has been named the next Artistic Director of the Tony Award-winning Hartford Stage. (Photo by Defining Studios.)

HARTFORD, CT – David R. Jimenez, President of the Board of Directors of Hartford Stage, is delighted to announce that OBIE Award-winning director Melia Bensussen has been named the next Artistic Director of the Tony Award-winning theatre. She will assume the role in June.

In addition to her highly-regarded work, Hartford Stage leaders were impressed by Bensussen’s passion for reinterpreting classics and directing new plays, her broad and extensive experience at regional theatres across the country, her well-honed skill set as an artistic administrator in academia, and her commitment to advancing the theatre’s community engagement initiatives and education programs.

“Melia is accomplished, talented and well-recognized in the theatre world.  I am thrilled that she will be joining Hartford Stage, and I have full confidence she will continue to build on the theatre’s history of artistic excellence and acclaim,” Jimenez said.

Walter Harrison, President Emeritus of the University of Hartford and a past Hartford Stage board president, chaired the Search Committee.  The Search Committee, comprised of 11 Hartford Stage board members, was tasked with identifying an artistic director from a pool of over 85 potential candidates who would continue to embrace Hartford Stage’s mission and act as an artistic and organizational leader throughout the local, state, national and international theatre community. Thomas Hall and Christine O’Connor of AlbertHall&Associates LLC assisted with the national search.

Harrison said, “I am thrilled we have been able to attract Melia Bensussen from a very talented and diverse pool of candidates. She brings creativity, energy, intellect, and enthusiasm to everything she does. The Search Committee was unanimous in believing she is the right person to lead Hartford Stage at this point in its history.”

“I am honored and thrilled to be appointed Hartford Stage’s next Artistic Director, and I look forward to following in the footsteps of the distinguished and committed artists who have previously served as Artistic Directors at Hartford Stage,” Bensussen said. “Hartford Stage’s national reputation, its history of bringing world-class artists to Hartford, and its extraordinary commitment to education in this region all make for a thriving institution. I look forward to working with a great staff and board to further develop Hartford Stage’s high profile, as well as to increase community engagement and further expand its importance to the city of Hartford and environs.”

Bensussen received the OBIE Award for her direction of The Turn of the Screw, adapted by Jeffrey Hatcher from the story by Henry James, at Primary Stages in New York. Her first experience at Hartford Stage was as assistant director to Emily Mann (Having Our Say: The Delany Sisters’ First 100 Years, Broadway; Murder on the Orient Express, McCarter Theatre Center and Hartford Stage) on A Doll House (a new translation by Irene B. Berman of Henrik Ibsen’s A Doll’s House) in 1986. She returned to Hartford Stage in 2003 to direct Edwin Sánchez’s Diosa, inspired by the life of legendary movie star Rita Hayworth. In addition to winning an OBIE Award, Bensussen was twice given Directing Awards by the Princess Grace Foundation, including their top honor — the Statue Award for Sustained Excellence in Directing.

“It’s an exciting time at Hartford Stage, building on a record of success. It can evolve even further in its international profile, its community engagement and its educational programming,” Bensussen said. “At a time when the country most needs healthy discourse across ideologies and beliefs, the theatre can provide a haven and a forum for a multiplicity of views, beliefs, languages and cultures. I’m excited to work with this region’s diverse population to continue the artistic excellence that has won Hartford Stage its rightful renown, as well as expanding the range of stories on its stage and the faces in its audience.”

Raised in Mexico City, Bensussen is fluent in Spanish and has translated and adapted a variety of texts, including her edition of the Langston Hughes translation of Federico Garcia Lorca’s Blood Wedding. She is currently working on commissions and productions at the Huntington Theatre Company and ArtsEmerson in Boston.

Her acclaimed work with new plays has taken her to the Eugene O’Neill Theater Center, New York Stage and Film, PlayPenn, The Playwrights’ Center, Sundance, and other new play programs across the United States. Ongoing collaborations with playwrights include such distinguished writers as Kirsten Greenidge, Melinda Lopez, Jeffrey Hatcher, Masha Obolensky, Charlotte Meehan, and Kate Snodgrass. She has been lucky to have the opportunity to collaborate with a range of American playwrights, including Annie Baker, Mat Smart, Edwin Sanchez, Nick Gandiello, Eduardo Machado, Jose Rivera, Lee Blessing, Richard Dresser, and Willy Holtzman.

A graduate of Brown University, Bensussen currently serves as the Chair of the Arts Advisory Board for the Princess Grace Foundation and for the past eleven years has chaired the Performing Arts Department at Emerson College. She also serves on the executive board of the Stage Directors and Choreographers Society (SDC).