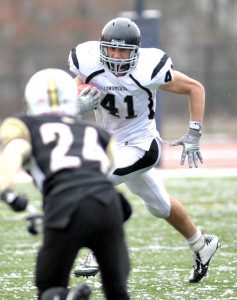 WESTFIELD – It was the end of an era in more ways than one Saturday at Westfield State University.
Central scored two rushing touchdowns, one through the air, and another on special teams to silence Western Massachusetts Division heavyweight Longmeadow 27-0 in the final Division I Super Bowl to be played at the college. As part of the state’s new playoff system, all six Bowl games will be held at Gillette Stadium beginning in 2013.
It was the Lancers’ 16th straight championship appearance.
“I’m real proud of these kids today,” said Longmeadow head coach Nick St. George. “They played their tails off. They have a lot to be proud of. We got into the red zone, but couldn’t finish.”
In fact Longmeadow reached the red zone three times in the first half, but came away with no points. But the Lancers’ defense had a tremendous half as well, stifling Central. The Golden Eagles were held to just 28 yards rushing and 12 yards passing, turning the ball over three times (2 interceptions, 1 fumble).
It was a first half dominated by defense.
Longmeadow opened the game with a three-and-out, but senior defensive back Joseph Lee picked off Central junior quarterback Cody Williams’ first pass near midfield. The Lancers took over and drove the ball all the way to Golden Eagles’ 2-yard line, falling just short on a fourth-and-goal.
Central went three-and-out on its second possession. Longmeadow pushed the ball into the red zone again before stalling out at the 20.
Longmeadow dominated time of possession in the first quarter, holding the ball for all but 1 minute, 22 seconds. Central put together a lengthy drive early in the second quarter, but the Lancers defense came up big again as senior linebacker Michael Sell intercepted the ball deep in their own territory.
Once again, Longmeadow drove the length of the field only to be stopped on 4th and 15. Central intercepted the pass to take possession of the ball on its own 25.
But Central only had the opportunity to run just three plays as it fumbled the snap on its third play from the line of scrimmage, turning the ball over on its own 35 with 1:05 remaining in the half.
Longmeadow moved the ball into the red zone for the third time, but came up empty again. A 10-yard penalty knocked the Lancers back to the 25-yard line and a sack on 4th-and-20 ended the scoring chance as time expired.
Central came out with renewed enthusiasm in the second half, and a new game plan.
In the third quarter, Central moved the ball 80 yards in eight plays – five plays through the air. The Golden Eagles scored when senior Brian Rivas hauled in a pass from Williams around the 25-yard line, and shook off a would-be tackler, sprinting to the end zone for a 48-yard touchdown with 7:14 left.
The scoring play took a bit of bite out of Longmeadow, but the real back-breaker came a short time later when junior Ju’an Williams returned a punt 68 yards for a touchdown. A two-point conversion made it 15-0 with 4:36 left in the third quarter.
“That took a lot of air out of us,” St. George said.
Longmeadow’s defense continued to make big plays, setting up its offense with a third-quarter pick when sophomore linebacker Conrad McCarthy stepped in front of Williams’ pass giving the Lancers the ball at their own 33.
Longmeadow moved the ball close the red zone for the umpteenth time, only to be stopped on a fourth-and-one at the 25-yard line with 8:29 remaining in the fourth quarter.
Central put the game out of reach on the following possession. Six consecutive runs – the sixth being a 32-yard TD run from junior running back DeQuon Clemons – made it 21-0 with 5:33 left.
The Golden Eagles intercepted yet another pass in the waning minutes, and scored on senior running back Aaron Owens’ 48-yard touchdown scamper with 48 ticks remaining.
“We’ve been through a lot of adversity,” said St. George, whose team battled injuries and the absence of longtime coach Alex Rotsko, who retired from the program a year ago. “These players came back and did a great job.