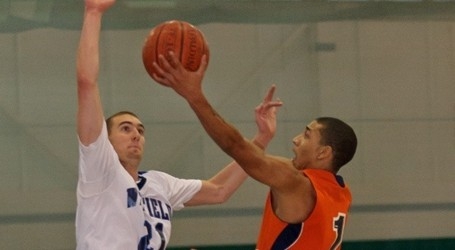 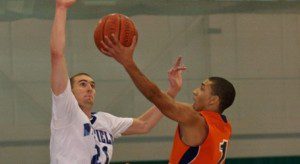 NORTH ADAMS – Senior center Matt Devine (13 points, 13 rebounds) and sophomore forward Grant Cooper (14 points, 11 rebounds) notched double-doubles as Westfield State University earned a hard fought 71-69 overtime victory over MCLA in a MASCAC men’s basketball showdown on Tuesday.
The hotly contested game moves the Owls a half game in front of MCLA at 8-2 in the MASCAC (18-4 overall). The Trailblazers suffered their second MASCAC defeat and are 7-2 in the conference (11-11 overall).
Westfield’s balanced attack was paced by sophomore guard Jordan Santiago’s game high 16 points. The 6-7 Devine stuffed the stat sheet with six steals and four blocks in addition to his 13 points and 13 caroms. Owl leading scorer Lee Vazquez finished with 11 points, all in the final 25 minutes, including five clutch points in overtime.
MCLA displayed its balanced attack once again with three players each scoring 12 points – Ruben DelRosario, Paul Maurice and John Jones.
The MASCAC Showdown was tight from start to finish. In the second half alone, no team led by more than six points, and the final 25 minutes of play featured nine ties and 11 lead changes. The Owls actually scored the game’s final six points to earn the key conference road victory and avenge a 64-43 home setback to the Trailblazers in January.
The teams traded baskets to start the OT. Maurice then made one of two at the line and DelRosario drained a desperation 3-pointer as the shot clock expired to give MCLA a 69-65 edge with 2:41 left in overtime.
Cooper scored in the post and Vazquez nailed his only 3-point basket of the game to give Westfield a 70-69 lead with 1:54 remaining. Both teams committed turnovers which set up a frantic final 30 seconds.
MCLA had possession and following a sideline out of bounds play, Trailblazer Bilal Shabazz was stripped by Dan Tessier with nine seconds left giving the Owls possession. Forced to foul, MCLA sent Santiago to the stripe. The former Westfield High School standout missed the first and made the second to give Westfield a 71-69 edge.
MCLA had one last chance and Maurice got a great look at a game-winning
3-pointer from the left corner. However, the shot hit iron as the buzzer sounded giving the Owls the emotional victory.
The contest was physical all night as was evident with nine minutes remaining the second half. With the score tied at 52 all, DelRosario stole a pass and headed for a layup. He was fouled by Santiago which drew the ire of the MCLA bench. Technicals were issued to Santiago and DelRosario and MCLA lost seven players for leaving the bench area, leaving the hosts with just seven players for the remainder of the game.
Westfield seemed in control at that point, taking its largest lead of the second half, 61-55, with five minutes remaining. But MCLA rallied, going on a 7-0 run to take a 62-61 advantage with 2:51 left in regulation. A Cooper jumper put Westfield back in front then Trailblazer Vernon Cross made one of two free throws to tie the score with 44 seconds left.
The Owls missed a pair of shots and turned the ball over as time expired sending the game into overtime.
The hotly contested first half saw MCLA jump out quickly. The Trailblazers opened the game on a 13-4 run that included four points from senior Richard Johnson forcing an Owl timeout. After trading baskets and MCLA holding a 15-6 lead, the Owls scored six straight to pull within three. The run was capped by a Tessier 3-point basket.
After MCLA took a seven-point edge at 21-14, the Owls made a strong surge to take their first lead. Westfield outscored MCLA, 18-5, over the next six minutes for a 32-26 edge with just over two minutes left in the opening period. MCLA trimmed the margin to 33-30 at the half.
Santiago tallied 12 first half points, while Jones led MCLA with eight points in the opening 20 minutes.
OWLS’ WOMEN DEFENSE MCLA: Westfield State University clamped down defensively, holding MCLA to 24 percent shooting en route to a convincing 65-43 victory Tuesday.
The Owls improve to 15-8 overall and 7-3 in the MASCAC. MCLA falls to 8-14 overall, 0-9 in conference play.
The Owls set the tone early defensively. They took total command midway through the opening half and never looked back. Along with holding MCLA to poor shooting, the Owls almost doubled up the Trailblazers on the glass, owning a 59-30 edge in rebounding.
Westfield only placed a pair of players – Jen Ashton (12 points) and Briana Kelly (11), in double figures – as the Owls had 10 players break into the scoring column.