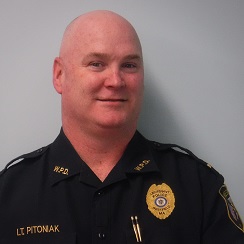 WESTFIELD- The Police Commission met Monday evening at City Hall to vote on the appointments of two special police officers and to fill the soon-to-be vacant captain’s position that will be left by Lawrence Valliere when he takes on the role of police chief in June.

Lt. Jerome Pitoniak was the only eligible Westfield Police Officer on the captain’s list. Commissioner Leonard Osowski only asked one question on behalf of the commission — if Pitoniak was ready to assume the responsibilities of captain. Osowski said they stuck to a single question because the commission had interviewed Pitoniak, “at least eight times,” already.

“I’m ready to go,” said Pitoniak, “I’ve been trying to learn as much from both captains as I can.”

The two people who were listed on the agenda to be appointed as special officers were Marisa Parmeggiani and Dario Camacho. Parmeggiani was interviewed briefly first where she told the commission about herself. She is originally from Taunton and graduated from Westfield State University in 2015, where she now works for the campus police department. She is also pursuing her Master’s degree in public administration and criminal justice.

Camacho then stepped forward for a brief interview. He said he has worked at Westfield State University for 12 years and as a police officer in Granville and the town of Wales. Camacho is currently the interim police chief in Wales until a permanent replacement can be found. Both candidates were approved to be special officers, effective May 14.

At the end of the meeting Chief John Camerota announced that there are only three officers that are still out from the Police Department’s staffing crisis earlier this year. At the height of the problem, there were at least 15 officers that could not work due to injury, illness, and various types of leave.