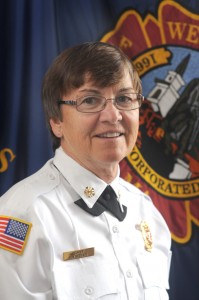 WESTFIELD – The specifications have been chosen, bids have been solicited and the first payment has been appropriated so the Westfield Fire Department will get a new platform truck – in eight to ten months.
The City Council voted Thursday to authorize the appropriation of $193,046.39 to fund the first year’s payment for a seven-year lease-to-own program to fund the acquisition of a new aerial fire truck to replace the city aging platform truck.
Fire Chief Mary Regan explained in a recent interview that the lease-to-own plan would minimize the financing costs for the new vehicle.
She said that the new truck has been “speced out” by a Fire Department committee so that, while the city’s firefighters may not know exactly what the new truck will look like, they know that it will have all the features they decided were necessary. Regan said that there are “a handful” of companies that could build the city’s new platform trucks and bids have already been solicited from them.
The $1.4 million price tag for the truck is a number that the committee that determined the specifications for the needed truck came up with and Regan said that she thinks the actual bid may be slightly lower.
“We think we’re in the ballpark, if anything we think we’re on the higher side” Regan said adding “We think we may be getting money back.”
She said that the city would also get some money back for the current platform truck. “Our plan is to try to trade it but if it doesn’t have enough value we’ll have to reevaluate that” she said adding that a manufacturer might want to refurbish and resell the truck or it might by purchased by a smaller fire department which cannot afford the capital outlay to buy a new platform truck.
She said that the truck was cut from the budget when it was first proposed but Mayor Daniel Knapik announced it’s acquisition as a priority in a speech after his inauguration and the money for the first of seven annual payments has been appropriated.
“Going forward, it will be something that will be worked in the budget” she said.
Regan said that the lease-to-own program will cut the costs of the new truck because, among other reasons, the city will start paying for the truck when it’s ordered so the manufacturer can use that money for the building expenses and Regan also said the city can save three or four percent of the costs by getting the order for the truck in this year, before prices increase.
“I think that’s what motivated the move” to appropriate the money for the first payment now, Regan said.
She said that bids have been received and will be opened on Wednesday. She said “Our hope is to have an order in place by the end of the year.”
Regan said that, once construction of the truck get underway, the department’s mechanic, Chris Bard, and members of the planning committee will visit the manufacturer two or three times to inspect their progress and will make a final visit, once the truck is completed, to make sure all the equipment functions as planned before the manufacturer drives the truck to the city.
Regan said that the company chosen may have an incentive to complete the truck promptly because, she said, some of the companies like to have new trucks ready so they can be displayed before delivery at the New England Fire Chief’s Show, a firefighting trade show staged at the Eastern State Exposition grounds in June.
“It is a big incentive for them to have pieces to showcase” at the trade show Regan said.
“I think they’ll try for the six months but realistically it might be as much as eight” she said.