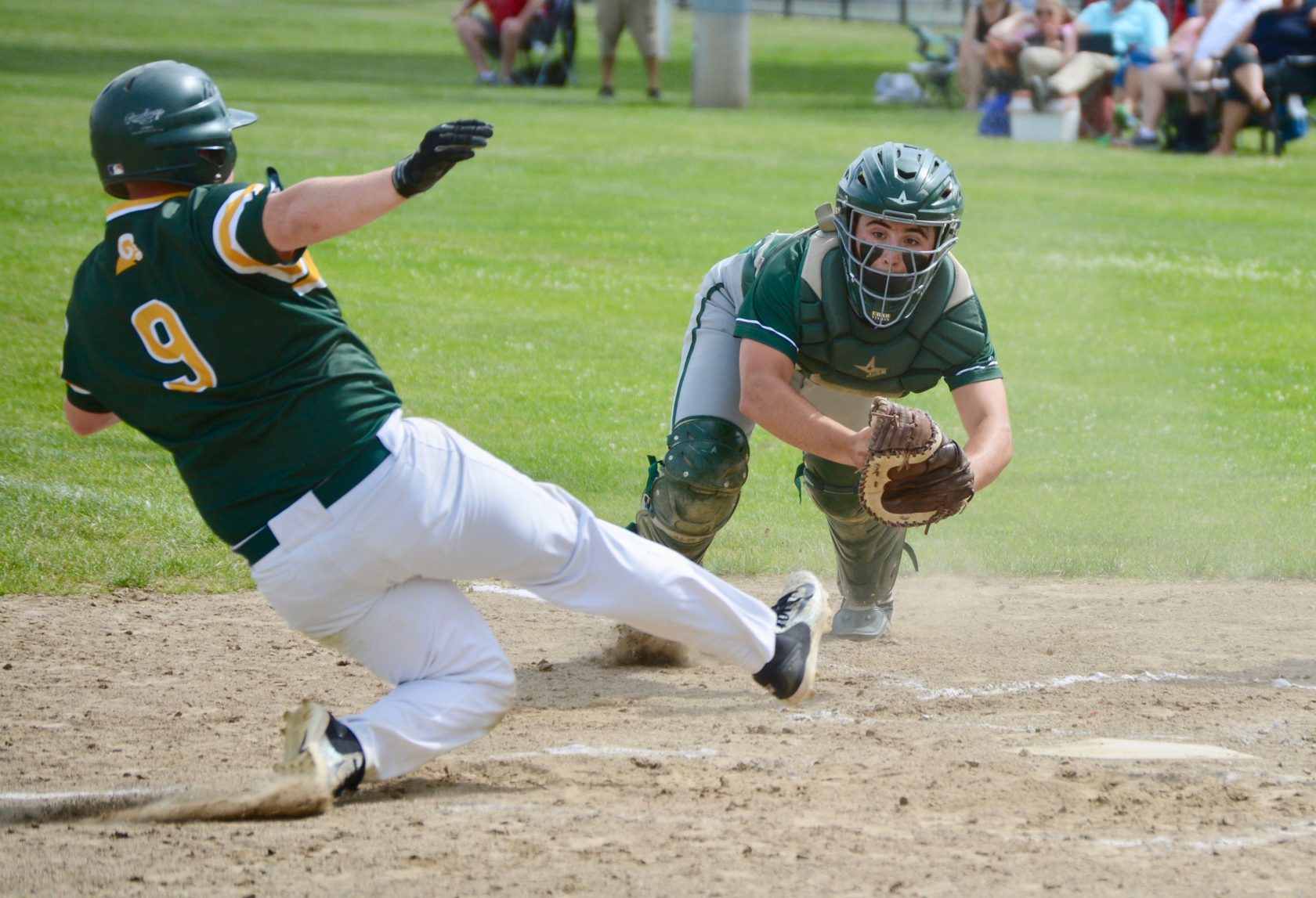 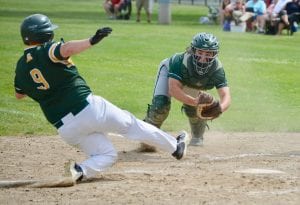 Southwick’s Josh Sylvia (9) beats the tag from the Greenfield catcher for the first run of the game Monday. (Photo by Chris Putz)

GREENFIELD – The Southwick Rams baseball team is semifinal bound.
No. 5 Southwick advanced to the next round with a 7-2 win over fourth-seeded Greenfield in a quarterfinal matchup Monday. The Rams (15-7) will take on the top-seeded Taconic Braves (17-3) in a West Division 3 semifinal Wednesday at Westfield State University at 4 p.m.
“I’m a big believer in you have to beat whoever is in front of you,” said Southwick coach Bill Dupre, whose Rams have now won seven of their last eight games. “What a great way that would be to get to the finals.”
Southwick’s offense was more-than-up-to-the-task with Johnny Cesan (2-for-3, run, sac-bunt), Josh Sylvia (2-for-3, run, 3 RBIs), Josh Lis (1-for-3, RBI), Dan Burnett (triple, walk, RBI), Bart Shea (1-for-3, double, walk, RBI, run), and Sam Wynglarz (1-for-3, walk) providing the bulk of Southwick’s attack.
Southwick’s offense clicked with precision throughout, and even proved unstoppable as witnessed by four consecutive hits in the third inning to seize control of the game.
Cesan started the string of hits with a single. Burnett fought off eight pitches before unleashing a booming RBI triple, Shea followed with an RBI double to make it 3-0. Sam Mizanoglu singled. And Sylvia, who scored a run early in the game, knocked in a run while reaching on an error.
“I thought we played with a lot of confidence, had a couple of big two-strike hits, and were hitting the ball the other way,” coach Dupre said. “We hit the ball really well.”
In the seventh, Sylvia tacked on a pair of insurance runs with a 2-run single.
“We are doing the stuff that wins ball games,” coach Dupre said. Southwick’s head coach pointed to a routine fielder’s choice by Burnett that allowed one run to score but brought the Rams one out closer to victory.
Josh Lis earned the victory on the mound for Southwick, scattering four hits, one walk, and two runs over six innings. He struck out four batters.
Burnett shut the door on Greenfield with an inning of relief, striking out three.
“It’s weird,” coach Dupre said. “I feel like we’re going to have a shot. Our kids are confident, our bats are heating up, and we’ve won seven of our last eight.”
I guess it doesn’t seem that crazy after all for Southwick to make it eight.

SOFTBALL
WEST D2 QUARTERFINALS
Rams’ ride ends at Red Raiders
No. 1 Hampshire 12, No. 8 Southwick 0 (5 inn.)
The top-seeded Red Raiders wasted no time in showing everyone just why they were awarded the overall seed.
Hampshire advanced to Thursday’s semifinals at the University of Massachusetts- Amherst. The Red Raiders will take on the winner of No. 4 Greenfield (14-4)/No. 5 Wahconah (14-6).
The Southwick Rams, who opened the postseason with a 4-2 win over the ninth-seeded Athol Red Raiders (12-9) finish the year 19-3.