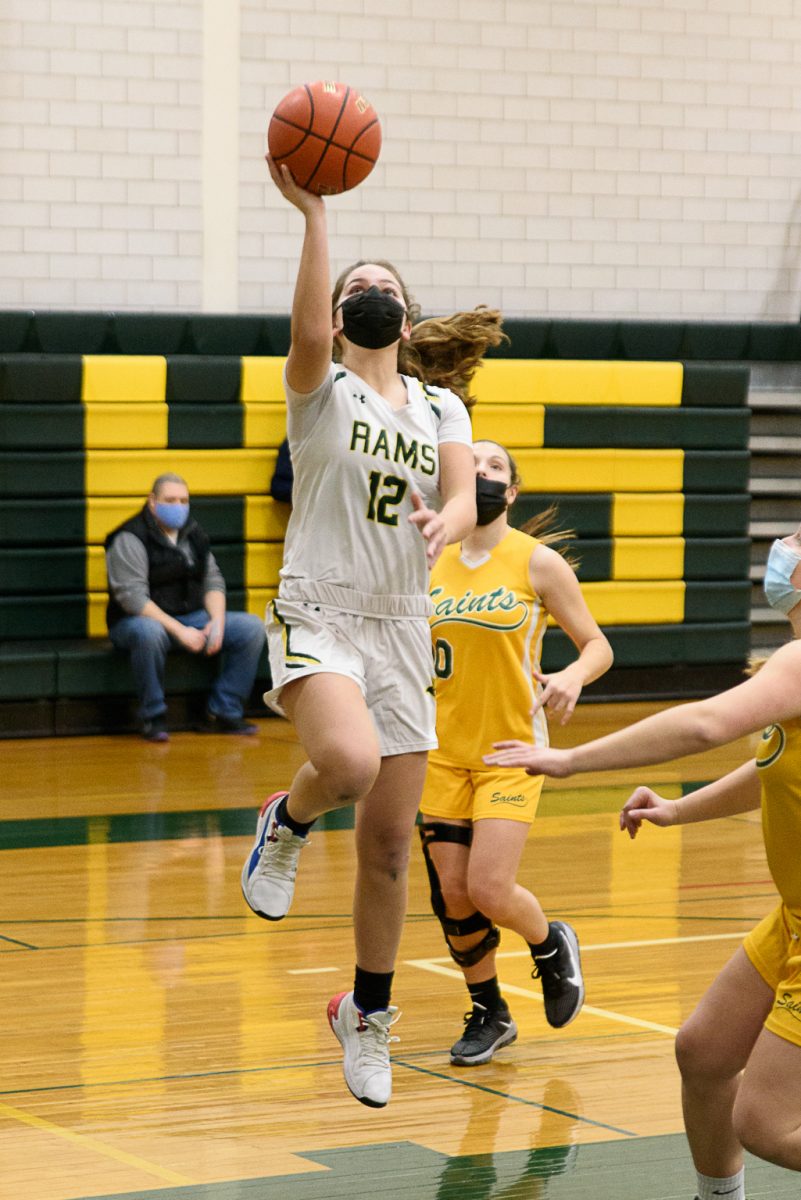 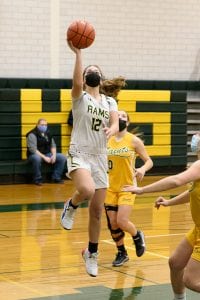 SOUTHWICK – Due to Covid rules and restrictions adopted by the MIAA and PVIAC prior to the start of the 2021 season, the St. Mary’s and Southwick Regional high School girls basketball teams will not meet for a third time this year. Good thing for the Rams, the second time was the charm.
Southwick rebounded from a Feb. 23 loss to St. Mary’s with a convincing 40-25 win over the Saints Friday night to even the season series 1-1 on its final day of the winter sports season.
“The vibe is always different on senior night,” Southwick girls basketball coach Brittany Sleight said. “We also had two days to practice. Their hard work paid off.”
Southwick seniors Kaitlyn Haseltine, Kayla Andrade, and Morgan Grilli were honored in a brief pregame ceremony. Two of their understudies, junior Hannah Burke and seventh grader Maeve Turmel, provided the offensive spark.
Burke (15 points) and Turmel (13) combined for more than half of Southwick’s final point total.
“The seniors hustle. …No matter where the ball goes, they’re always on the ground, they cut, everything,” Burke said. “Senior night helped a lot. It really kept up our intensity.”
The two players helped Southwick establish a first quarter lead. Burke tallied seven points in the opening quarter, and Turmel had five.
St. Mary’s stayed within striking distance in the second quarter with a 3-pointer from Peyton Ramos and an acrobatic two from Emma Goodreau. Southwick continued to remain out front with key plays like Burke’s circus shot late in the first half.
St. Mary’s managed to stay close in the third quarter with a 2-point shot from Amelia Willenborg and a steal and layup from Goodreau. The Saints appeared to be gaining momentum before Sophia Andrade made a 3-pointer late in the quarter.
When St. Mary’s attempted fourth quarter comebacks, it was Turmel who twice nailed 3-point daggers.
“I knew we needed as many points as we can,” Turmel said. “I thought ‘take the open shot and just let it go.’”
Notes: While Grilli will return to play basketball for the Rams during the “Fall II” season, Haseltine and Andrade will depart to play for the girls volleyball team.