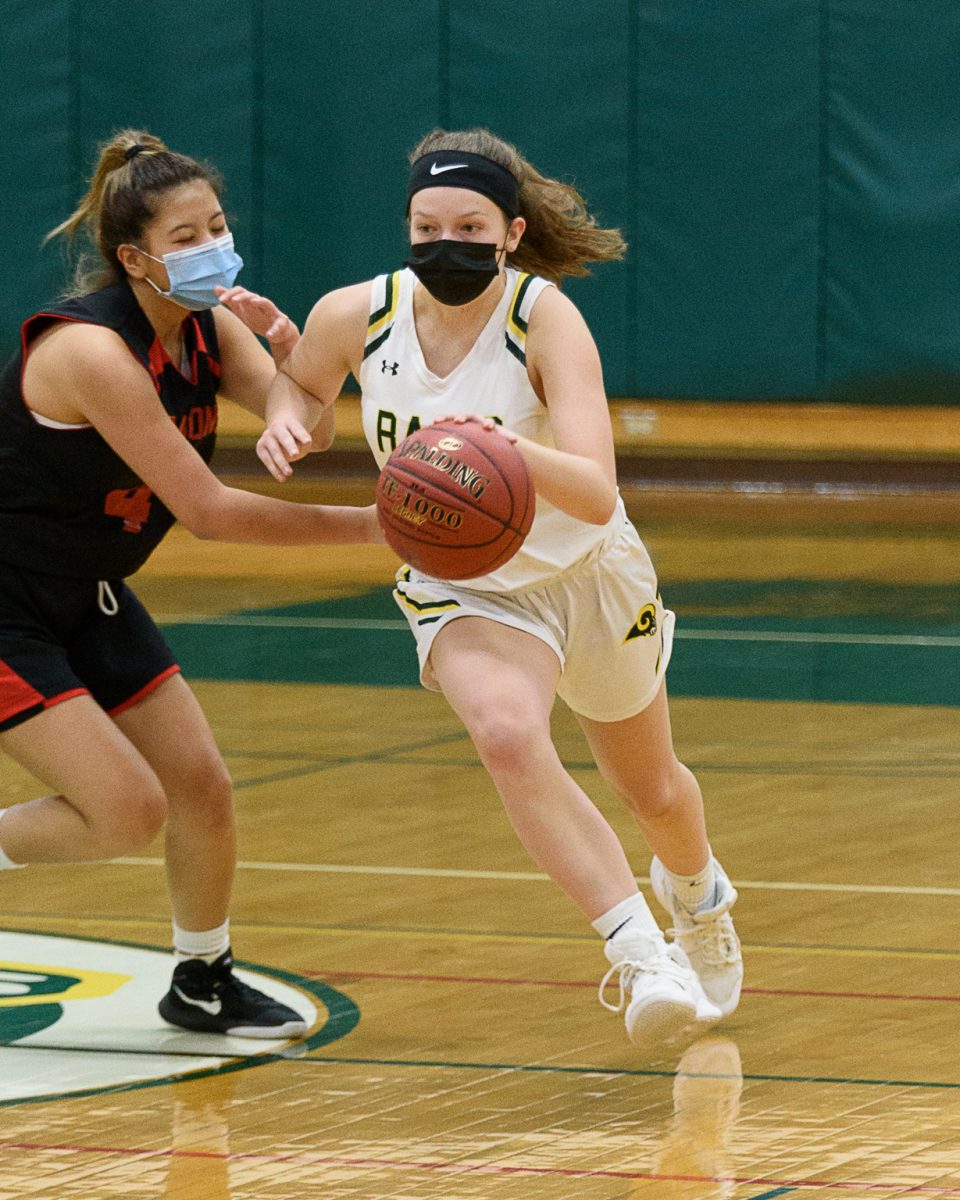 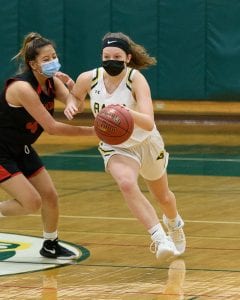 SOUTHWICK – What layoff?
Three weeks into the 2021 high school girls basketball season, the Southwick girls basketball team finally hit the court and fared extremely well. The Rams bounced the visiting Pioneer Valley Chinese Immersion Charter School Dragons in rather convincing fashion Thursday night, 40-7.
“(Our players) came ready; they’re prepared,” Southwick Rams coach Brittany Sleight said.
Sleight said the confidence level of her players was high, despite not having played a true varsity game in nearly a year. “They’ve been putting in the hard work.”
Southwick had two solid practice sessions and conducted several virtual workouts, but their combined effort against PVCICS showed in the final box score.
After sputtering in the game’s opening minutes, Southwick scored its first points of the game when Hannah Burke hit a mid-range baseline jump shot over two defenders with 5:16 showing on the first quarter clock. Over the next 11 1/2 minutes, the Rams built a commanding 19-2 lead.
Although it may be one of the most used cliches in all of sports – – other than “giving it 110 percent” – – Southwick put together a truly remarkable team effort. In the first half, six different players scored for the Rams.
Southwick continued to spread the ball around in the second half and Maeve Turmel drained two 3-point shots in the final quarter. The Rams defense held their opponent to zero points in the third quarter, two points in the fourth quarter and no made field goals in the entire second half.
“We were switching up the defense here and there,” coach Sleight said. “We kept the other team on their feet.”
Turmel finished with a game-high 12 points. Molleigh McGivney, Kayla Andrade, and Hannah Burke scored six points apiece for Southwick. Rams’ Emily Hanifan chipped in five points, Kaitlyn Haseltine had three, and Mia Ferrentino, 2.
“We’re finally able to get a season in here so we’re excited … just to play,” Sleight said. “These are hard times between going remote to hybrid mode for school. Just getting them to play is what’s important.”

BOYS BASKETBALL
Tigers hold off Collins, Saints
Westfield Technical Academy 46, St. Mary’s 40
Andrew Navarro led Westfield Tech with 18 points and the Tigers withstood a furious fourth quarter effort from St. Mary’s Brady Collins, who scored 12 points in the final quarter to finish with a game-high 21.
“For the first time this season we had to overcome some adversity,” Westfield Technical Academy Tigers coach Kyle Dulude said. “St. Mary’s never quit.”
St. Mary’s banked in a 3-pointer just before the half.
Josh Sturmer and Brody Zabielski scored eight and six points, respectively, for Westfield Tech. Tigers’ Carter Slack recorded 14 rebounds, and DeCarlo Lincoln delivered key minutes off the bench.
“I think basketball is great for the development of character and today we found out a little more about ourselves and how important it is to be there for each other,” coach Dulude said. “We had a good talk after the game about life. It was great talking about things that make us stronger as people. I have a very special group of kids that are enjoyable to be around.”
It was a marked improvement for St. Mary’s in their second meeting with Westfield Tech. “I’m very happy with the progress we made,” Saints coach Joe Molta said.
Nate Campbell and Jonathan Baillargeon finished with six and five points, respectively, for St. Mary’s.

Rams win opener
Southwick Regional 47, PVCICS 28
After scoring just 14 points in the first half, Southwick mustered up 33 more in the second half for a season opening win on the road against PVCICS.
Grayson Poole (15 points) and Leighton Billings (13) combined for 28 of Southwick’s 47 points.