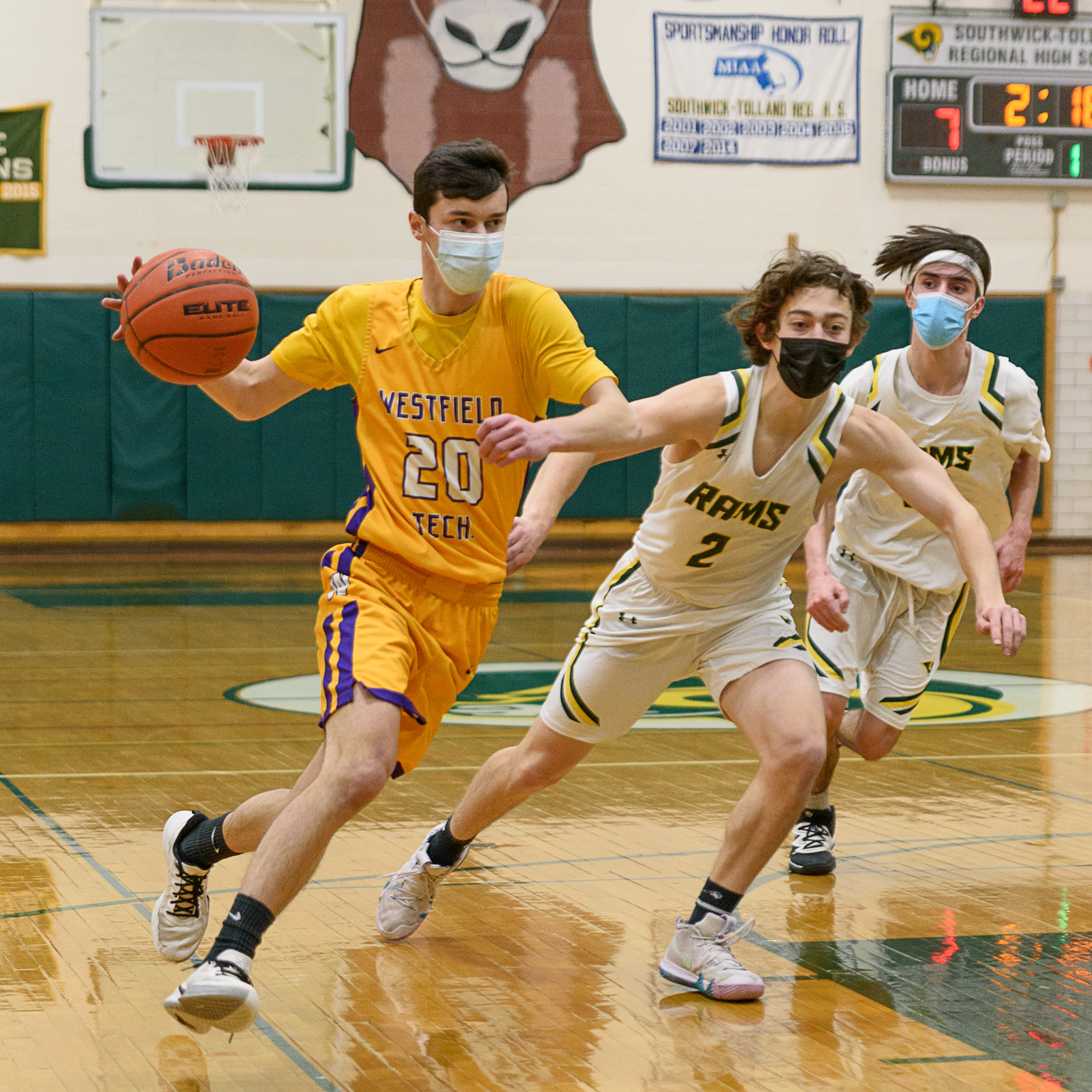 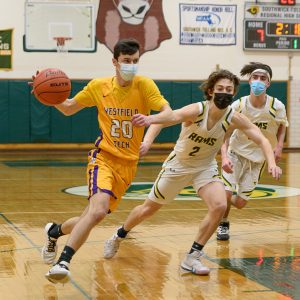 SOUTHWICK – Although Tuesday night’s contest between the Westfield Technical Academy and Southwick Regional boys basketball teams could have slipped under the radar amidst the current landscape of high school sports, it easily became a contender for “Game of the Year.”
Southwick and Westfield Technical Academy battled through two extra periods of hoops before the Rams escaped with a win over the visiting Tigers in double overtime, 59-52.
“It was a long game, a lot of minutes played,” said Southwick’s Nick Michael, who tied teammate Grayson Poole with a game-high 13 points apiece. “It’s good to get the win though. They played hard; we played hard. …It was a battle, but I’m glad we got it.”
Poole helped Southwick establish an early lead, hitting a 3-pointer and two free throws in the opening minutes. The Rams went on a 7-0 run that began late in the first quarter and ended early in the second. During that stretch, Brennan Vinesett banked in a 3-pointer and Nate Goodwin hit consecutive baskets, including a steal near mid-court and breakaway layup that resulted in a 14-6 lead.
Westfield Tech settled in during the final four-plus minutes of the second quarter. The Tigers put together a 12-0 run, highlighted by 3-pointers from Brody Zabielski (8 points) and Decarlo Lincoln (9). Those two long range shots were sandwiched around a steal and layup from Zabielski.
A steal and layup from Josh Sturmer (12 points) to begin the second half resulted in Westfield Tech’s largest lead, 22-16.
The game tightened up in the third quarter with both defenses taking over. Westfield Tech hit two 3-pointers in the quarter – – one each from Andrew Navarro and Zabielski – – and Leighton Billings (9 points) drained one for Southwick. The Rams led by two points heading into the fourth quarter, 34-32.
The contest remained close throughout the fourth quarter. Westfield Tech fell behind by as many as four points before Riley Sullivan made a 3-point basket to pull within one, 40-39. The Tigers fell behind by three, but a made 3-point shot from Navarro tied the game at 42-42 with 2:03 remaining in regulation.
It was a stalemate for the next two minutes until Navarro gave Westfield Tech a 2-point lead, 44-42, with two free throws. A put-back from Southwick’s Jack Turgeon in the waning seconds of the quarter pushed the game into overtime.
An inadvertent whistle sounded just seconds before Turgeon’s shot over a Westfield Tech defender fell through the hoop, drawing the ire of Westfield Technical Academy boys basketball head coach Kyle Dulude. Dulude stormed out onto the court at the conclusion of the quarter, but much to his dismay the officials turned a deaf ear to his plea.
The first overtime period resulted in just four points: two made free throws from Lincoln and Southwick’s Jordan Dryz.
Southwick took a 2-point lead in the second overtime with two free throws from Goodwin. Westfield Tech responded with consecutive 2-pointers from Sturmer, including a nice reverse layup on a strong baseline drive. The Tigers led 51-48.
Southwick recaptured the lead with about 90 seconds remaining when Poole sank a 3-pointer. Michael quickly squashed any thoughts of a Westfield Tech comeback with a 3-pointer, an aggressive drive to the hoop that resulted in two, and two free throws.
“I wasn’t nervous,” Poole said of his go-ahead shot from long range. “I was ready to play. I’ve been playing this thing for four years now. I was excited to win against this very good team.”
Coach Dulude was equally as impressed with his team’s effort despite the loss after six frames.
“I think toward the end we got tired,” Dulude said. “Double overtime is a lot of playing time when you’re not in a regular season and you’re not training regularly every day. I’m just happy to see their grit and they didn’t quit. …Knowing that we competed with a high-level team is just good for our future. …I think our guys fought as hard as they could. I think they gave it everything they had. I’m proud of their efforts.”

GIRLS BASKETBALL
Bombers seniors deal Cards loss
Westfield 47, Pope Francis 31
Westfield seniors Ali Piper, Saige Smith, and Chandler Pedolzky combined their efforts to deal the Pope Francis Cardinals a loss Tuesday night. The Bombers, who have been hampered by injuries of late, played shorthanded.
“It was a good game, a good character check and I think we passed tonight with flying colors,” Westfield girls basketball head coach Dylan Willey said. “I thought Saige did a great job running the show at point guard…Chandler was aggressive making all the right plays…and Ali Piper was dominant in the first half. She was always in the right place at the right time.”
Pedolzky led Westfield in the scoring column with 21 points. She made 7-of-9 from the free throw line. Piper scored a career high 11 points, 10 of which came in the first half. Bombers’ Ally Burke chipped in four.