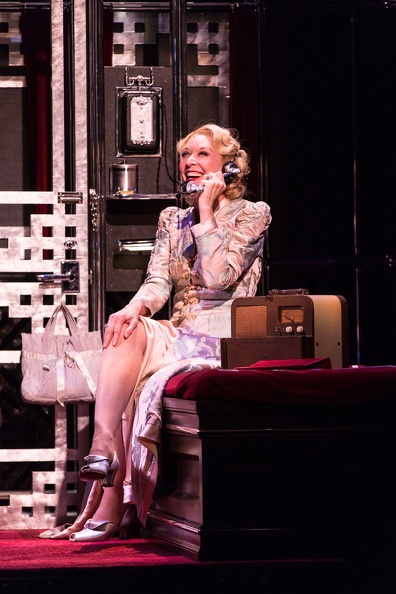 Murder on The Orient Express will be one great big crowd-pleaser at Hartford Stage. Based on a classic whodunnit by Agatha Christie, with a slick and comic adaptation by Ken Ludwig, staged with panache by Emily Mann, beautifully performed, and designed in a style which can only be described as deluxe, this co-production of Hartford Stage and Princeton’s McCarter Theatre is definitely “Broadway-ready”. 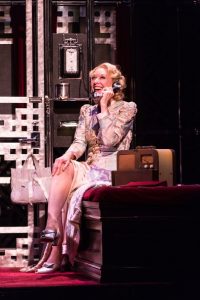 First, the production elements of Murder on The Orient Express have the same “wow” factor that distinguished Hartford Stage’s Anastasia and Rear Window from other well-designed productions. Beowulf Boritt’s set, which travels from an exotic Istanbul station to a first-class train, complete with luxury accommodations and dining car, is a feast for the eyes. William Ivey Long has rendered some gorgeous costumes highlighting haute couture of 1934 Europe. The hats are totally tony. Ken Billington’s lighting design is equisite and Darron L. West’s sound design keeps the moments on the right track.
I’m reminded of a similar show, the musical On The Twentieth Century, which opened on Broadway 40 years ago this week, also set on a luxury train, which won its designer, Robin Wagner, a Tony Award for capturing the sleek look of a luxury train–a once-upon-a-time way to travel in high class style.. 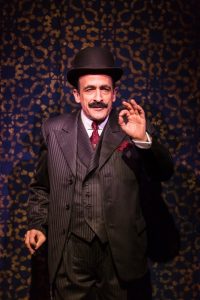 Ken Ludwig, who write the hysterically-funny farce Lend Me A Tenor, and adapted the Gershwins’ Girl Crazy into Crazy for You, has turned Murder on The Orient Express into a stage production. Agatha Christie wrote the thriller in 1934, and the classic has been adapted for radio, film, television, and even a computer game. 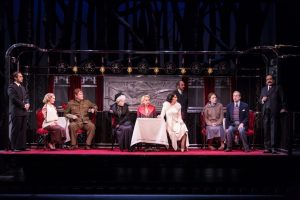 The ensemble in Hartford Stage’s Murder on the Orient Express. (Photo by T. Charles Erickson)

The very accomplished David Pittu plays Christie’s classic detective Hercule Poirot with a mix o gallic char and inquisitive quirkiness. He’s got a crime to solve. The Orient Express, enroute from Istanbul to Paris, gets snowbound outside of Belgrade. A brash American is found stabbed to death in his compartment. Poirot has to figure out “whodunnit” from amongst the other first class passengers, rail executive and crew. I won’t give away who the culprit is, but I was guessing wrong for a good part of the second act.
The performances are all superb. Julie Halston, an alum of Charles Busch’s company of actors, is hysterical as a multi-married American heiress. Leigh Ann Larkin from the Broadway revivals of A Little Night Music and Gypsy, is alluring as an Hungarian countess. Veanne Cox, an alum from An American in Paris, is fascinating as an Imperial Russian dowager.
Luxury trains are mostly a thing of the past, as are literate and funny thrillers. Murder on The Orient Express, is all polish and flair. By popular demand, Murder on The Orient Express has been extended until March 25.