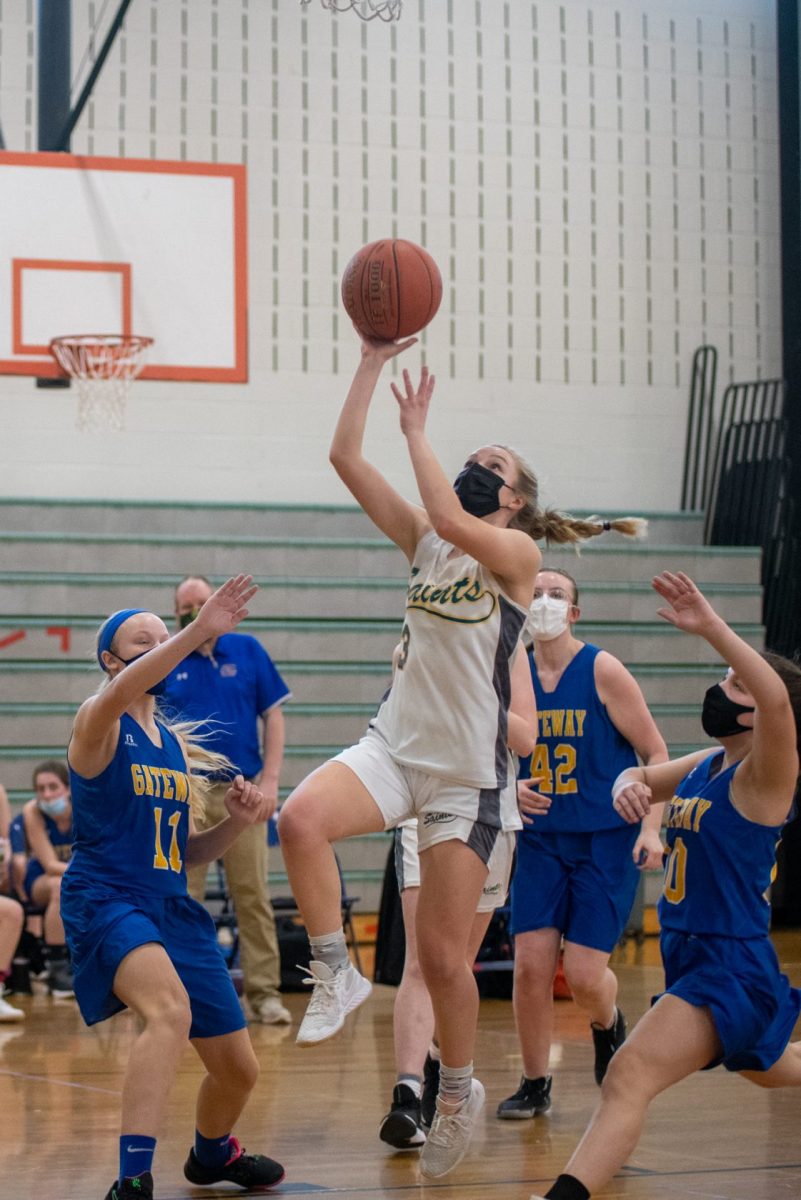 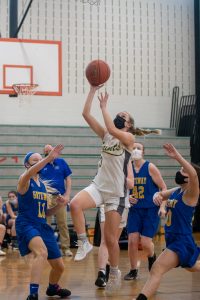 WESTFIELD – The Gateway Regional High School girls basketball team ran into a buzzsaw in their “Fall II” season opener in the form of the St. Mary’s Saints.
St. Mary’s used a 9-0 first quarter run and went on a 19-0 run in the second quarter to build a commanding 30-3 first half lead en route to a convincing 52-17 win over Gateway Tuesday night at Westfield Intermediate School.
St. Mary’s sophomore Amelia Willenborg led all scorers with 14 points. Saints’ Emma Goodreau contributed nine points, Allie Goodreau and Kailyn Cabrini each scored eight; Paige Hutkoski and Paighton Ramos delivered six and five, respectively; and Caitlin O’Brien chipped in two.
St. Mary’s instituted a full court press for most of the first half. The pressure forced several turnovers.
“Our speed and communication has definitely helped us a lot this year,” Willenborg said. “We’ve been working for a while on our press at practice and we’ve been really working hard. We definitely really worked well as a team tonight with our press.”
Willenborg helped fuel St. Mary’s first run, hauling in a rebound and putting it back up and in with a short jumper, and burying a 3-pointer off glass. She converted two aggressive lay-ups through the paint during the Saints’ even larger run in the second quarter.
“I think for me personally, it was just trying to get some layups,” Willenborg said. “I think that was the mentality for most of the team. We were all trying to get good passes, work with each other, try to get the boards.”
Six different players scored for St. Mary’s during the team’s 19-0 run. Ramos capped off the run with a made 3-point shot.
In the second half, St. Mary’s pulled back on the press. Still, the Saints could not miss … or at least it felt like that.
Cabrini made a pair of second half 3’s, and Emma Goodreau made one. Goodreau nearly completed an old-fashioned three as well, but missed the free throw to complete an and-one.
“We were trying to run some of our plays a little more (in the second half),” Willenborg said. “We were just kind of seeing if we can get some set plays before we shoot, but we still wanted to keep ourselves up in the lead and keep shooting.”
Gateway’s Peyton Bucko finished with a game-high five points.
Notes: The game was first of a two-game home and away set between the two teams originally scheduled to take place during the winter season, but was delayed several weeks due to Covid-related protocols. While it was St. Mary’s second-to-last game of the season, it was Gateway’s first of many.