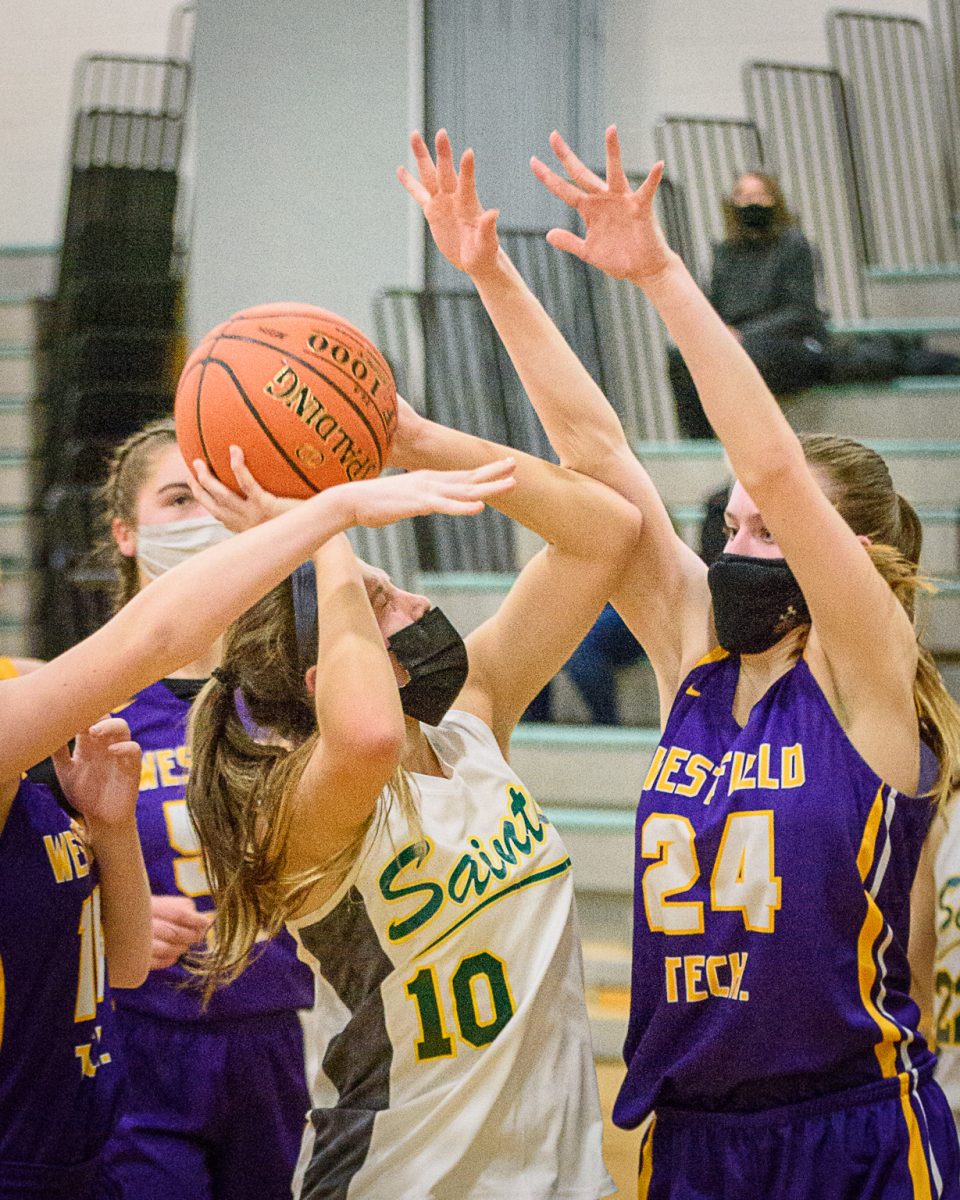 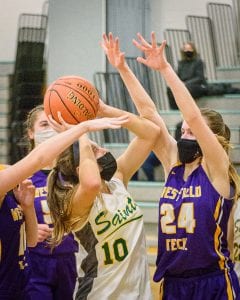 WESTFIELD – Historic. Epic.
Although those two words could easily be used to describe what has gone on in the world over the course of the past year, either one of those adjectives can also best describe what is currently going on with the St. Mary’s girls basketball team.
For the first time in recent memory, St. Mary’s is off to an unbeaten 3-0 start. The latest victory is the result of a dominating 39-17 win over the Westfield Technical Academy Tigers Wednesday night at Westfield Intermediate School.
“Everyone is pretty fast, and just like last year I think we have an equal amount of athleticism,” said St. Mary’s junior point guard Allison Goodreau (4 points), who worked to get everyone involved by distributing the ball evenly on the court. “We all bond really well so I think that helps on and off the court.”
It took some time for St. Mary’s to get started offensively.
Westfield Tech’s defense smothered St. Mary’s at the outset, holding the Saints scoreless for the game’s first 5-plus minutes. Meanwhile, Lyndsay Deland (12 points) paced the Tigers with four points, thanks to two free throws and a lay-up.
St. Mary’s rose to the challenge though. The Saints went on a 13-0 run over a 10-minute, 42-second span that resulted in a 13-4 lead.
Goodreau opened up the scoring for her team, hoisting a sky-high 2-pointer from beneath the rim with 2:43 remaining in the first quarter. Kailyn Cabrini scored a game-tying bucket inside the interior of Westfield Tech’s defense, knotting the game at 4-all heading into the second quarter.
St. Mary’s extended its lead in the second quarter with a nice baseline jumper from Emma Goodreau, a Cabrini lay-up, and three free throws. Deland briefly halted the Saints’ run by drawing a foul and making 1-of-2 from the free throw line, but Lillian Nadler’s buzzer beating jump shot just before halftime portended what was to come in the second half.
Early in the third quarter, Deland split the defense with an aggressive drive down the center of the lane and dropped in a bucket to help Westfield Tech pull to within eight, 15-7.
Another run from St. Mary’s though, this time 11-0, put the game out of reach. Nadler, Emma Goodreau, Caitlin O’Brien, Macy Woodger, and Paige Hutkoski (3-pointer) each scored as the Saints spread the ball around to take a 26-10 advantage.
Amanda Garstka attempted to rally Westfield Tech with a 3-pointer with about two minutes left in the third quarter, but St. Mary’s responded with five more points – – one bucket each from Payton Ramos and Emma Goodreau, and a free throw from Goodreau – – that gave them a 31-10 cushion with just one quarter to go.
“My coach was saying push it,” Emma Goodreau said. “We were all running up the court and I was like – – fast shots – – obviously I’m up and ready for the shots right away. I felt like I had an open lane for my shots.”
Cabrini made three solid shots for St. Mary’s during the first four minutes of the fourth quarter. She finished with 10 points. Deland made an and-one with 3:56 remaining in regulation, and scored another bucket late.
“We’re off to a very good start,” St. Mary’s girls basketball coach Rodney Rodriguez said. “We have a dominant freshman group with height and speed, two juniors and one senior. Honestly the competition is in the practice, trying to split girls in playing time. We’re all just very even. It’s more like who’s on today? Paige wasn’t on on a shooting aspect but she plays great defense, and you have the Goodreaus who are driving hard, and Cabrini who’s just a good shooter. The one who hasn’t heated up yet who honestly looks like a really good shooter is O’Brien.”
Coach Rodriguez said when the shots start to fall for O’Brien, the competition will have an even harder time contending with St. Mary’s offense.
The two teams will renew their rivalry again Friday when St. Mary’s plays at Westfield Technical Academy High School. The game begins at 5 p.m.