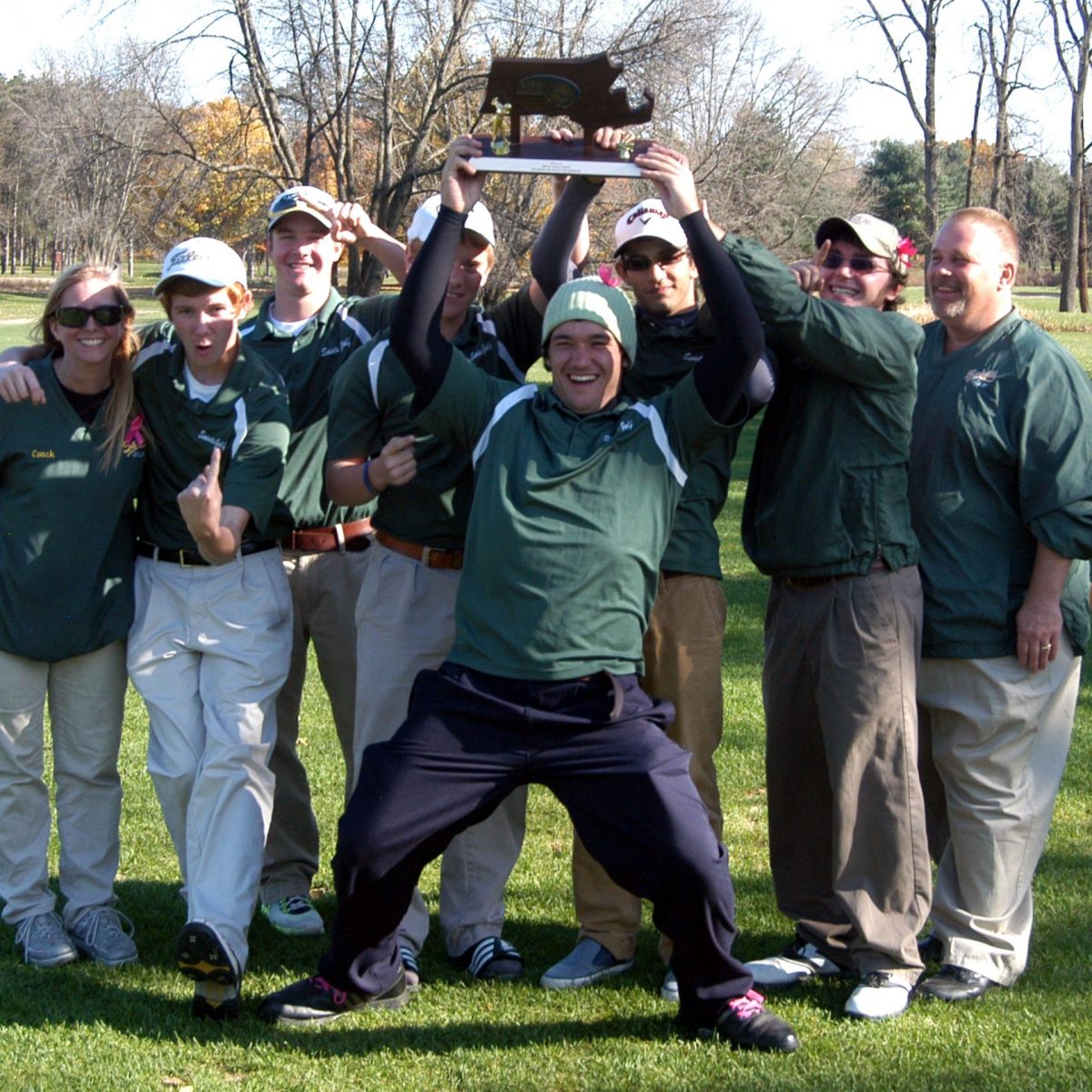 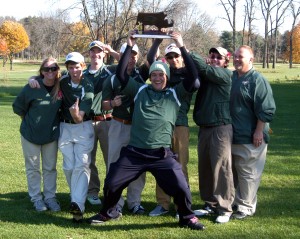 The St. Mary High School golf team celebrates after winning the Western Massachusetts Division 3 championship Monday at Tekoa Country Club. Noah Parker, who finished with the second-best score on the course, stands front and center with the trophy. (Photo by Chris Putz)

WESTFIELD – Home could not have been any sweeter for five seniors and one junior on the St. Mary High School golf team Monday.
St. Mary’s senior Noah Parker shot a second-best, 2-over-par-73 at Tekoa Country Club, and the Saints won their second Western Massachusetts Division III golf championship in three years.
St. Mary finished with a first-place score of 319, followed by Lenox (326 points), and Franklin Tech (327).
“We were surprised in 2010 when we won,” said St. Mary coach Paul Finley. “We expected to win this year at our home course with all seniors and a junior.”
Although the sun shined brightly at times with temperatures reaching the upper 60s, golfers often had to battle more than a pesky bunker, a water hazard, or a bit of the rough as a breeze made things more challenging.
“We shot some great rounds of golf in some tough conditions,” Parker said. “Every time I turned around the wind was in my face spiraling around.”
But the Saints were well prepared.
“We worked so hard for it – all summer, all season pretty much for this moment,” Parker said. “We came together.”
It was truly a team effort as seniors Zach L. Brown (78), Corey Clemente (80), and Zach S. Brown (87), and junior Sam Thresher (82) all finished with incredible scores. Teammate Lyndon Ondrick shot a 104.
“I know the course well,” said Zach L. Brown, who has been golfing regularly year-round at Tekoa where he is a member. He will get his third straight shot at a state title.
Although St. Mary’s competitive spirit was evident throughout the morning and afternoon hours, the team’s lone junior, Thresher, provided some offbeat moments that kept the Saints loose. He was also on his golf game.
Thresher used a three-wood for a 280-yard drive on the par four, second hole, one of four straight holes that he finished with par on.
“Our team chemistry is off the charts,” Thresher said. “Even if we had lost together, we would still be a group.”