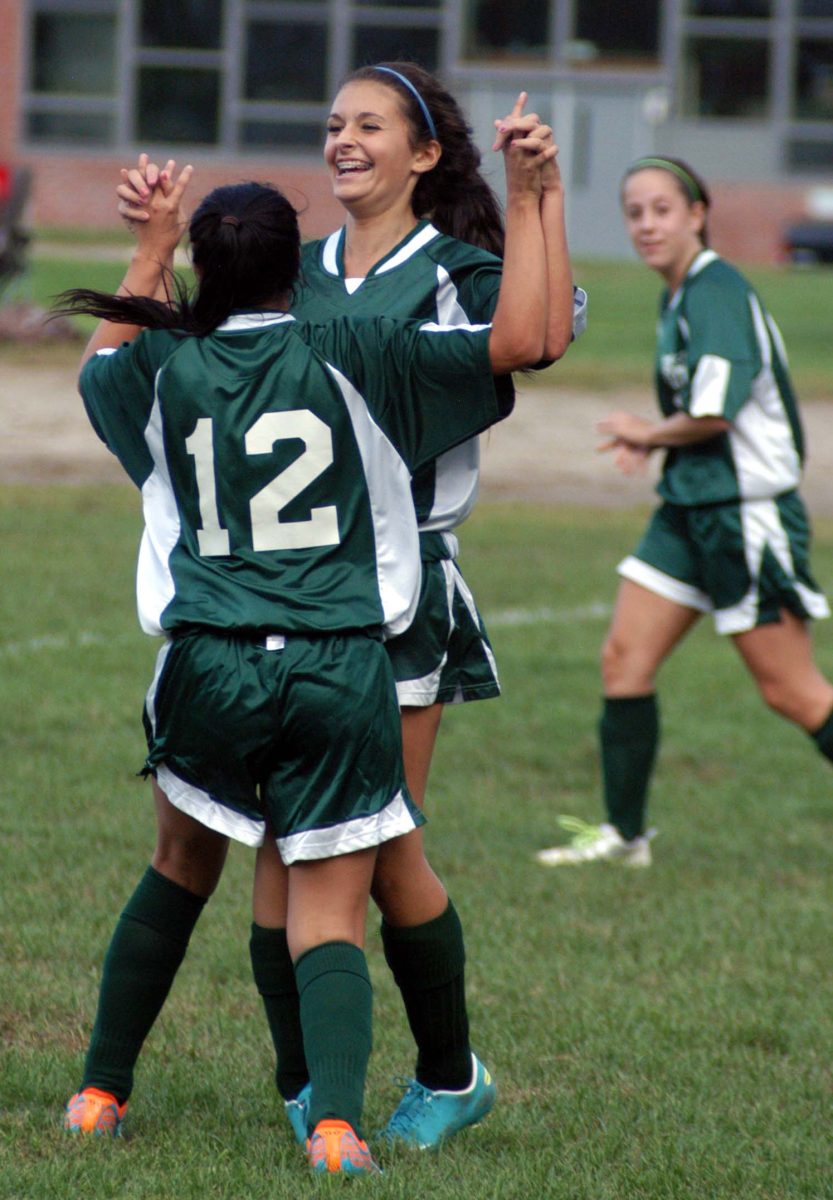 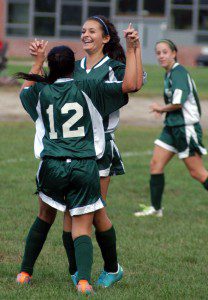 WESTFIELD – For the St. Mary High School girls’ soccer team, it was truly TGIF (Thank God It’s Friday).
St. Mary capped off a heavenly first week of play, shutting out Westfield Voc-Tech 3-0 Friday at Jachym Field. Sophomore Monica Peterson tallied the game’s first two goals in the first half, and Miranda Arena tacked on an insurance goal late.
Peterson hit a pair of beautiful angled floaters near the edge of the penalty box – one in the game’s fourth minute and the second 32 minutes in – to take the early lead.
“I definitely couldn’t have done it without my teammates,” Peterson said.
Lauren Chapdelaine and Taylor Marshall were credited with the assists. Peterson said Savannah Lubanski and Jillian Watson were also critical to the team’s early success.
“I’m trying to hit the 100-point club,” Peterson added. “I think that was my 23rd point. I definitely can’t do it without them.”
Peterson also got an assist of sorts from one of her teammates, Miranda Arena, who scored off a rebound about midway through the second half.
Chapdelaine nearly recorded a hat trick shortly thereafter, but Westfield Voc-Tech goalie Megan Illnicky (13 saves) made an incredible save on a breakaway chance.
Voc-Tech had a couple of chances in the final minutes of the game. Steff Costa hit a high-arcing shot that just carried over the crossbar, and Ashley Lees fired a dart at St. Mary goalie Francesca DePergola, who made the save.
DePergola finished with eight saves in goal in the second half. The Saints’ first half goalie, Aisling Butler, recorded five saves.
With the loss, Westfield Voc-Tech fell to 1-1.
“I am very pleased with the way we played as a team, despite the loss of course,” Voc-Tech coach Maddy Mangini said. “We are coming together as a team with intensity and integrity. If (our players) can continue with the intensity and integrity, I am looking forward to a great season.”
St. Mary improved to 2-0.