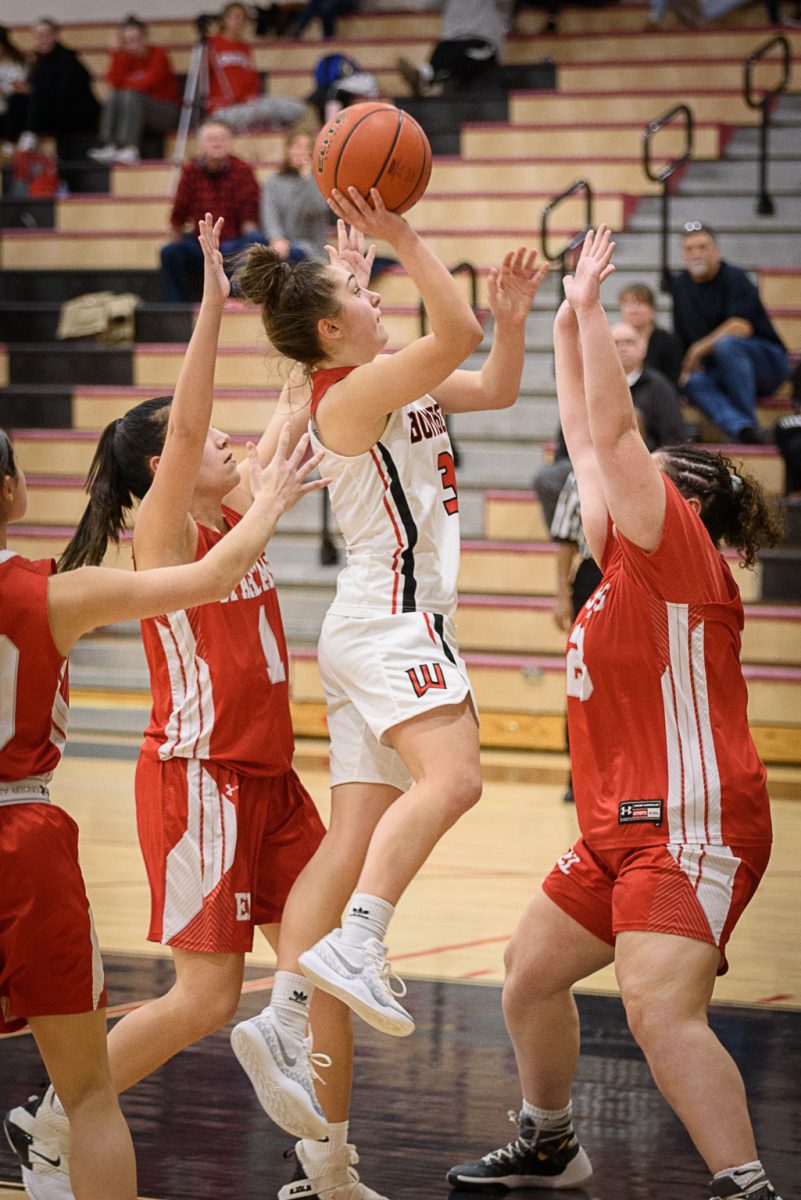 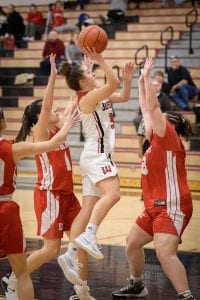 Westfield’s Olivia Hadla (3) drives through the teeth of the East Longmeadow defense on her way to the basket Friday night in the Whip City. (Photo by Marc St. Onge)

WESTFIELD – “One step forward, two steps back” is a phrase many have often heard before.
Well, on Friday night, senior guard Olivia Hadla took quite a few steps forward toward her goal of 1,000 points but the Westfield High School girls basketball team, as a whole, took one step back in losing to East Longmeadow 48-41.
Hadla was magnificent in defeat, scoring 15 points to pull within nine points of the hallowed 1,000. Unfortunately for Hadla and her teammates, East Longmeadow proved to be too strong down the stretch.
East Longmeadow closed out the game on a 14-4 run.
“Rebounds, loose balls, and turnovers were the difference,” Westfield girls basketball head coach Dylan Willey said.
East Longmeadow, which found itself in the bonus with 2:20 remaining in the third quarter, made 13-of-18 free throws in the second half. The Spartans finished with a whopping 20-of-31 from the foul line.
Westfield came out against East Longmeadow strong with Hadla distributing the ball trying to involve teammates from the outset. The senior guard drained consecutive 3-pointers at the end of the first quarter and beginning of the second quarter to give the Bombers a 14-9 advantage.
East Longmeadow took advantage of their height differential inside, muscling back into the lead 15-14.
A back and forth game ensued.
Hadla took over in the third quarter, making a putback, blowing by two defenders who attempted to trap the senior guard near the sideline and the third for a layup. Hadla’s 3-pointer gave her team a 29-24 lead midway through the third quarter.
Westfield got into foul trouble late in the third quarter, but still managed to make a few key baskets early in the fourth – a shot from Claire Griffith, a nice spin move inside the low post and two-point bucket from Chandler Pedolzky, and a two from Kaela Mochak.
From there though, East Longmeadow went on a 12-2 run to seal Westfield’s fate. The Bombers return to action on “Senior Night” Tuesday against visiting Minnechaug. Tip-off is at 7 p.m.

BOYS BASKETBALL
Saints get revenge against Gators
St. Mary’s 65, Gateway 63
St. Mary’s avenged a 20-point loss it suffered to Gateway in the teams’ previous meeting earlier this season.
Jack Lamirande paved the way with a 25-point outing. Nick Montenero (14 points), Mike Pepe (8), Brady Collins (8), and Colin Ramos (8) also had solid contributions for the Saints.
“Our kids have been playing better and better as the season has gone on,” St. Mary’s boys basketball head coach Joe Molta said. “Tonight was a great way to win a game and be rewarded.”
Evan Cortis (26 points) and Jayden Santiago-Lopez (16) led Gateway.

SKI RESULTS – Masciadrelli, Saints post first place run
St. Mary’s posted another fast run with yet another division and overall won in the slalom Thursday night.
Jack Masciadrelli led the way for St. Mary’s with a first place finish.
“He charged the whole course, being tactful in the areas where he needed to,” St. Mary’s head ski coach Andy Lussier said of Masciadrelli. “He skied it as inspected and it paid off.”
Manny Umana Kimura had another strong night, finishing ninth overall (5th division).
“(Manny’s) really focused and skiing well,” coach Lussier said. “Things are coming together for him.”
Hayden Lussier put down a solid run, finishing 17th overall and seventh in the division. Colin Freeman continued his run of consistency, finishing 20th overall (9th, division).
“Colin is having a great season for himself and is one of the reasons the team is so strong this season,” coach Lussier said.
The St. Mary’s girls ski team also had a strong outing, finishing fourth in the division. Chloe Lussier (8th overall, 4th division) and Elianna Umana Kimura (21st overall, 10th division) helped the Saints build momentum. Mara Downie continued her hard work, skied well and ended up 17th in the division.
“GS always brings things closer together with the field,” coach Lussier said. “It’s great to see this team get things going this season especially now having a little depth.”
NOTES: In the boys race, Aiden Mapel led the way for Southwick, notching a 19th place finish in 36.84. Westfield’s Alex Dawicki placed first for his team in 44.08. Bombers’ Emma Renaudette finished sixth for the girls in 27.17. Grace Brockbank led Southwick, placing 31st (31.62).

Wed., Jan. 22
WRESTLING
Bombers knock back Spartans
Westfield 45, East Longmeadow 24
Freshman Anthony Ross and senior Nate Dinnie led the way for Westfield.
Ross dominated his 120-pound opponent and eventually won by fall 24 seconds into the second period over East Longmeadow’s Tanner McTaggart.
“Ross is really wrestling tough right now,” Westfield coach Chris Malinowski said. “He has a very bright future.”
Dinnie bumped up two weight classes but was still able to dispose of Andew Violet in 1:48.
“Nate just keeps getting better every time out, “ coach Malinowski said.
Westfield senior captain Cam Foster (160 pounds) won by decision over Mitchell Aarons, 7-0. At 113, Bombers freshman Tristan Connors took a forfeit, coming off a win at the Futures Tournament in West Springfield. At 220, Chris Barber, who was fresh off a 3-1 finish as the Central duals, also took a forfeit.
Freshman Anthony Gustafson (132), sophomore Blake Braceland (138), and freshman Daniel Ptashuk (145) narrowly missed wins for Westfield.
“Our first-year guys are getting better every time out,” Malinowski said. “The future of Westfield wrestling looks very promising.”
Next up for Westfield is the Burt Berger Dual Meet Tournament Saturday at the home of the defending Chicopee Pacers.

BOYS BASKETBALL
Clarke scores 19
Baystate Academy 77, Southwick 54
Travis Jordan scored a game-high 29 points, Dion Bird finished with 18 (all on 3-pointers), and Rodney Mayfield chipped in with 15 in Baystate Academy’s win over Southwick Regional.
Evan Clarke led Southwick with 19. Rams’ Ryan Molta had 15, and Josh Lis, 8. Clarke and Molta each made three shots from beyond the arc.
Baystate Academy held Southwick to four points in the second quarter and nine in the third.
“That kind of sealed the deal for us,” Southwick coach Peter Fiorentino said of his team’s two-quarter scoring drought. “We fought well in the fourth quarter but ended up not being able to scrap back.”
Southwick fell to 2-9.

SKI RESULTS – Saints dominate first race of week
St. Mary’s opened the week with a dominating effort on the slopes at Berkshire East in Charlemont with yet another team win, placing four skiers in the overall top 15 and the same four in the top 10 in the division.
“While Giant Slalom usually brings the field closer together, we seemed to run away,” St. Mary’s ski coach Andy Lussier said. “‘Shake and Bake’ were in effect tonight.”
Coach Lussier was referring to St. Mary’s skiers Jack Masciadrelli and Hayden Lussier, who led the way. Masciadrelli finished second overall and second in the division, losing by just seven-hundredths of a second to Pope Francis’s Declan Sears. Lussier put down a fast run, finishing eighth overall and fourth in the division.
“Jack and Hayden have been the backbone of this team since the program started and are really skiing well this season,” coach Lussier said.
Manny Umana Kimura (11th overall, 6th division) and Colin Freeman (14th overall, 7th division) rounded out St. Mary’s team finish with some solid skiing and great runs.
“We’re just taking one race at a time and focusing on good fundamental skiing, solid runs and having some fun,” coach Lussier said.
][Chloe Lussier led the St. Mary’s High School girls ski team with a strong showing in the slalom (4th overall, 2nd division).
Elianna Umana Kimura had her best showing of the season, finishing 18th overall and seventh in the division. Kimura has improved her finishes every race and keeps moving up the leaderboard.
As a team, the Saints finished third in the division, also due in large part to some great skiing from Mara Downie (16th division) and Audrey Burke (17th division). “It’s great to finally have a little depth with the Lady Saints’ team,” coach Lussier said. “We’re hoping to continue to build the team over the next few seasons.”