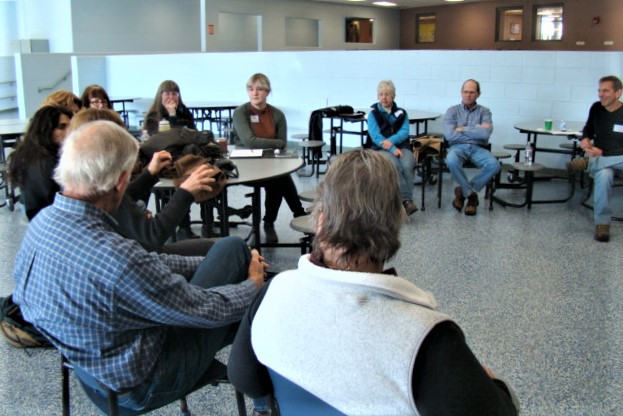 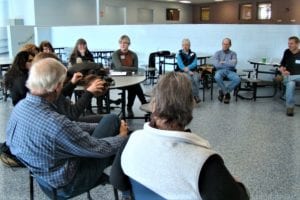 HUNTINGTON – Lifelong Huntington resident and architect Jeffrey Scott Penn is concerned about the effects of some recent hilltowns projects and proposals. Rather than sit back quietly, Penn organized a symposium Nov. 23 titled “Protecting the Western Highlands of 413.”

The event, at Gateway Regional High School, focused on sustainable development in the Gateway hilltowns. About a dozen residents from Huntington, Blandford, Becket and Hinsdale participated in the meeting; some lifelong residents,  like Penn.

The concerns of Penn and members of the community drove much of the discussion, along with pressing economic development issues.

“The proposed turnpike exit is understood to be ill-considered with inadequate existing road infrastructure, inadequate funding, devastating landscape change and poorly conceived results,” said Penn, who has been a vocal critic of the proposed exit. Penn has asserted that Westfield needs to correct its “poor traffic circulation, which causes gridlock and interrupts flow.”

Another topic raised was what Penn called “the improper construction of the Russell wind turbines,” which he described as inappropriately damaging protected viewsheds, interrupting identified critical wildlife habitat and not being properly permitted. He said the project demonstrates how communities need to behave more neighborly and regionally.

Clean energy was identified as a goal in the group, but they said wind turbines and solar arrays should be located sensitively. They discussed personal wind turbines, and installing solar roofs on all public buildings, as opposed to clear clutting or removing fields from agriculture for solar panel placement. Another idea raised was to install hydro power on all existing dams.

The vulnerability of Gateway Regional due to the serious reduction in school population was discussed as part of a national and regional trend of aging populations. Gateway Hilltowns Economic Development Director Jeanne LeClair, who participated in the symposium, said that Gateway is currently at 40% capacity.

Penn countered that residential development is a net economic loss for towns, because educating a family with two students for 12 years costs more than the property tax dollars they pay.

LeClair said while that may be relevant to towns with a population of 10,000 or more, small towns need enough people to be able to run businesses and keep the towns going.

Penn said with a population of 2,000, Huntington has more people than they ever did, but there are still vacancies on town boards, people are more disconnected from each other, and need to support local services and buy goods in town, even if it costs a little more.

“We don’t support each other in almost anything,” said Blandford resident Linda Smith. She also said government has become more complicated and expensive, and there is a need on the local level to have people with the skill sets to run the towns.

A discussion took place about rehabilitating vacant buildings and houses instead of building new ones, and programs such as the Community Preservation Commission in Becket which can assist local residents with rehab funds and services. Other programs mentioned that offer the services included the Hilltown Community Development Corporation, and Community Development Block Grants.

Penn said in 1986 and 1987 he advocated for the town of Huntington to save the deteriorating Stanton Hall, which has now become a vibrant town center.  Currently, he is lobbying for the town to purchase St. Thomas Church. He was also involved in getting the west branch of the Westfield River designated as a Wild and Scenic River.

“We realize that much state and federal assistance is based on population and benefits which we cannot demonstrate since we are so rural,” Penn said.

Other ways to demonstrate the value of the rural qualities of the towns were discussed, such as the value to the state of state-owned land in the hilltowns, and the need to renegotiate fair PILOT (payments in lieu of taxes) to the towns.

LeClair said the PILOT payments need to be based not on rural land values but on something to quantify that value, like credit for carbon capture. “Boston can afford to pave more and more because of our protected state forest and state lands,” she said, but whereas in Boston lands goes for $1 million an acre, the state pays comparatively pennies to the towns, many of which have a majority of their acreage in state-owned land.

Re-invigoration of sustainable forestry operations and saw mills were discussed as an example of potential economic development. Massachusetts imports something approaching 90% of construction lumber, yet ships out about 90% of its harvested timber.

Creative occupancy of existing infrastructure such as the empty mills and storefronts was also mentioned as an opportunity for economic development and startup industry. Telecommuting with good access to internet is becoming common and reducing the need to travel for work.

In other parts of the country, communities which have failed to maintain critical services have devolved back to county structure in order to share responsibilities, much like the recent decision for Chester and Blandford to share a police force. More regional sharing here should also be considered, they said.

“We recognize that our slight remoteness is critical to these qualities as well as the affordability of living here,” Penn said after the meeting, adding, “We seek a comprehensive assessment of sustainable energy, economic growth and governance which can lead to sustaining the vibrant communities we love.”

He said the group will attempt to engage economic developers, agencies, communities and citizens and reconvene the Symposium in 2020. He also said he will be starting a website to gather creative ideas after the New Year, which will be found at WMass413.com.