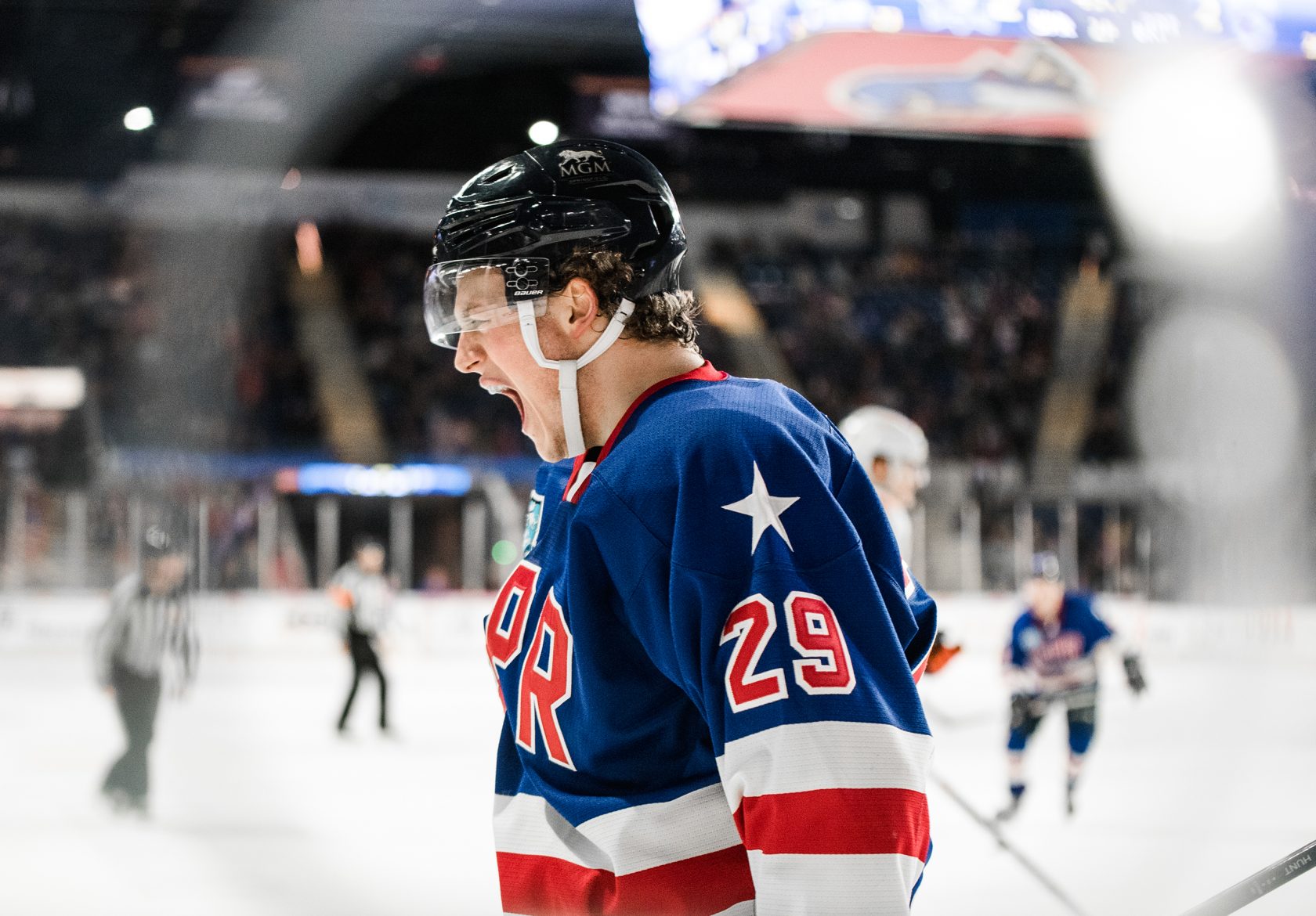 SPRINGFIELD – The Springfield Thunderbirds (25-19-2-0) scored the final four goals of the night in knocking off the Bridgeport Sound Tigers (15-25-4-1) by a final score of 6-2 on Saturday night before a sellout crowd of 6,793 inside the MassMutual Center.
The first period was a shooting gallery from start for each of the Atlantic Division foes, but Jared Coreau in the Bridgeport net and Sam Montembeault in the T-Birds crease had answers for 16 shots each in the opening period.
Springfield had the only two special teams chances in the period, but the power play could not dent Coreau despite extended pressure on the man advantage. 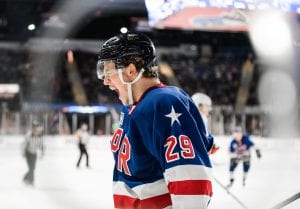 The middle period finally cracked the goal-scoring seal, and a wild 20-minute session ensued, beginning with rookie Jake Massie beating Coreau from the high slot to give Springfield the 1-0 advantage at 7:12 of the period.
Just 2:01 later, the Sound Tigers tied the game under controversial circumstances. Bobo Carpenter intercepted a pass from Montembeault and fired it right back at the T-Birds netminder. A whistle sounded right as Cole Bardreau slipped the puck into the empty net, but the goal stood. T-Birds coach Geordie Kinnear got into a heated discussion with the officials, to which the crowd responded to an enormous roar.
From that point forward, the T-Birds exerted their will. Owen Tippett recorded the first of three points as he turned the left-wing corner and snapped a shot underneath Coreau’s legs to make it 2-1 at 12:32 of the period. Bridgeport would not go quietly, though, as Grant Hutton beat Montembeault on a long-range wrister at 17:00 to tie the game again, 2-2.
2:10 after that, with less than a minute to go in the period, Dryden Hunt carried the puck into the offensive zone on a 2-on-1 with Adam Rockwood, and after being stopped at first, he snapped a shot home from the bottom of the right circle to put Springfield up for good, 3-2 at 19:10.
After fending off an early Bridgeport push, the T-Birds powered to the finish line with a three-goal third period, beginning with a strike from Jack Rodewald off a turnover by Coreau at 4:00 to make it 4-2. Then 9 minutes later, Daniel Audette added to the lead, finding a soft spot in the high slot, and firing a turnaround wrister past Coreau to make it 5-2.
In the final minute, Aleksi Saarela iced the game with his 11th goal of the season off a set-up from Tippett. With the three-point night, Tippett heads to his first AHL All-Star Classic with 40 points in his first 46 games.
The Thunderbirds also climbed into the fourth position in the Atlantic Division heading into the All-Star break.
For more ticket information or to become a 2019-20 Springfield Thunderbirds ticket package member, or to purchase single game tickets, call (413) 739-GOAL (4625) or visit www.SpringfieldThunderbirds.com. – Courtesy of Springfield Thunderbirds