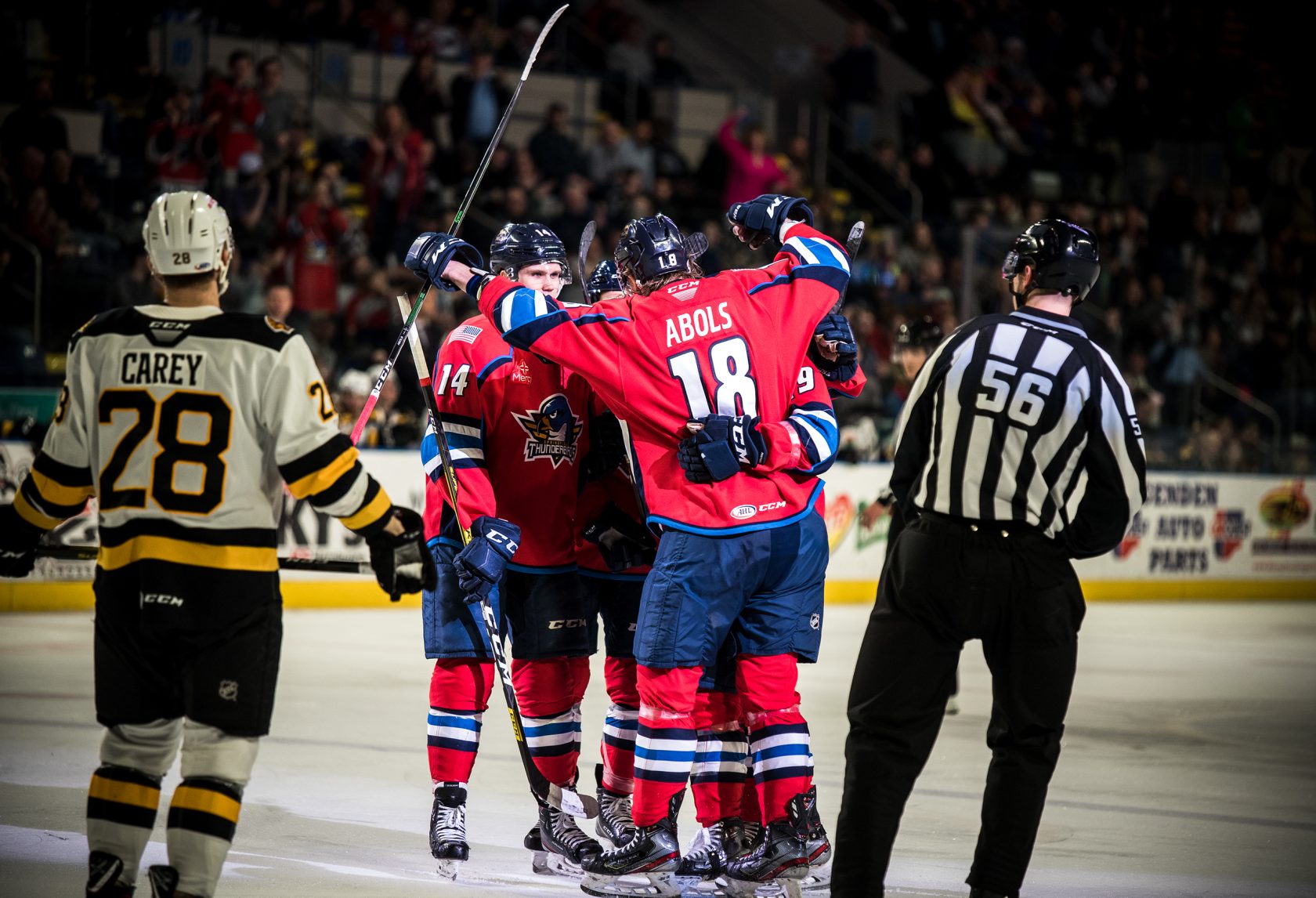 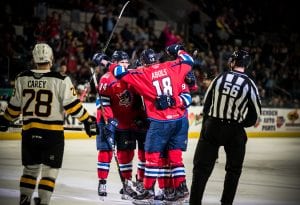 The Springfield Thunderbirds and Providence Bruins collided before a sellout crowd Saturday at the MassMutual Center in Springfield. (T-BIRDS PHOTO)

SPRINGFIELD – The Springfield Thunderbirds (30-26-2-0) could not pull away from the red-hot Providence Bruins, (33-18-3-3) who came from behind to take a 3-1 win on Saturday night before a sold out MassMutual Center crowd of 6,793.
The winning team had scored at least four times in each of the first nine meetings between the clubs, but defense and goaltender would be the story of the first period in Springfield on Saturday. Dan Vladar was on his game in the opening period a week after allowing four goals on just 23 Thunderbird shots. The 22-year-old Bruin goalie stopped all 11 shots that came at him in the first, including a handful on a T-Birds power play.
At the other end, Philippe Desrosiers, who entered with 96 saves on his prior 102 save opportunities, matched the youngster shot-for-shot. None were bigger than Desrosiers’ sprawling blocker hand save on Steven Kampfer on the near post with less than five seconds to go in the opening period to hold the game scoreless into the first intermission.
The tie made it all the way to the 9:32 mark of the second before the home side finally cracked the deadlock. Rodrigo Abols won a faceoff cleanly in the right circle back to Ethan Prow, who once again let a seeing-eye wrister get through traffic and past Vladar to make it a 1-0 lead for Springfield.
The lead would be short-lived, as just 2:11 later, operating on a man advantage, Peter Cehlarik found a soft spot in the slot area and lifted a perfect backhand shot under the crossbar to finally get one through Desrosiers and tie the game, 1-1, at 11:43.
Special teams would continue to be Springfield’s undoing in the final period. In the midst of an 0-for-6 power play night, Jack Studnicka fired the gut punch with his seventh shorthanded goal of the season on a breakaway backhander at 9:11 of the final period to give Providence the only lead it would need, 2-1.
For good measure, the Bruins got defenseman Urho Vaakanainen into the offense, as Steen found him creeping up into the left circle for a one-timer past Desrosiers at 16:15 to round out the scoring. Desrosiers turned away 25 of 28 shots as he saw his three-start win streak come to an end, while Providence took home its seventh straight win behind 31 saves from Vladar.
The T-Birds and Bruins rematch again on Friday and Saturday in a home-and-home series in Providence on Friday and back in Springfield on Saturday at 7:05 p.m. for Pink in the Rink Night presented by Baystate Health to benefit the Rays of Hope Foundation.
For more ticket information or to become a 2020-21 Springfield Thunderbirds ticket package member, or to purchase single game tickets, call (413) 739-GOAL (4625) or visit www.SpringfieldThunderbirds.com. – Courtesy of Springfield Thunderbirds