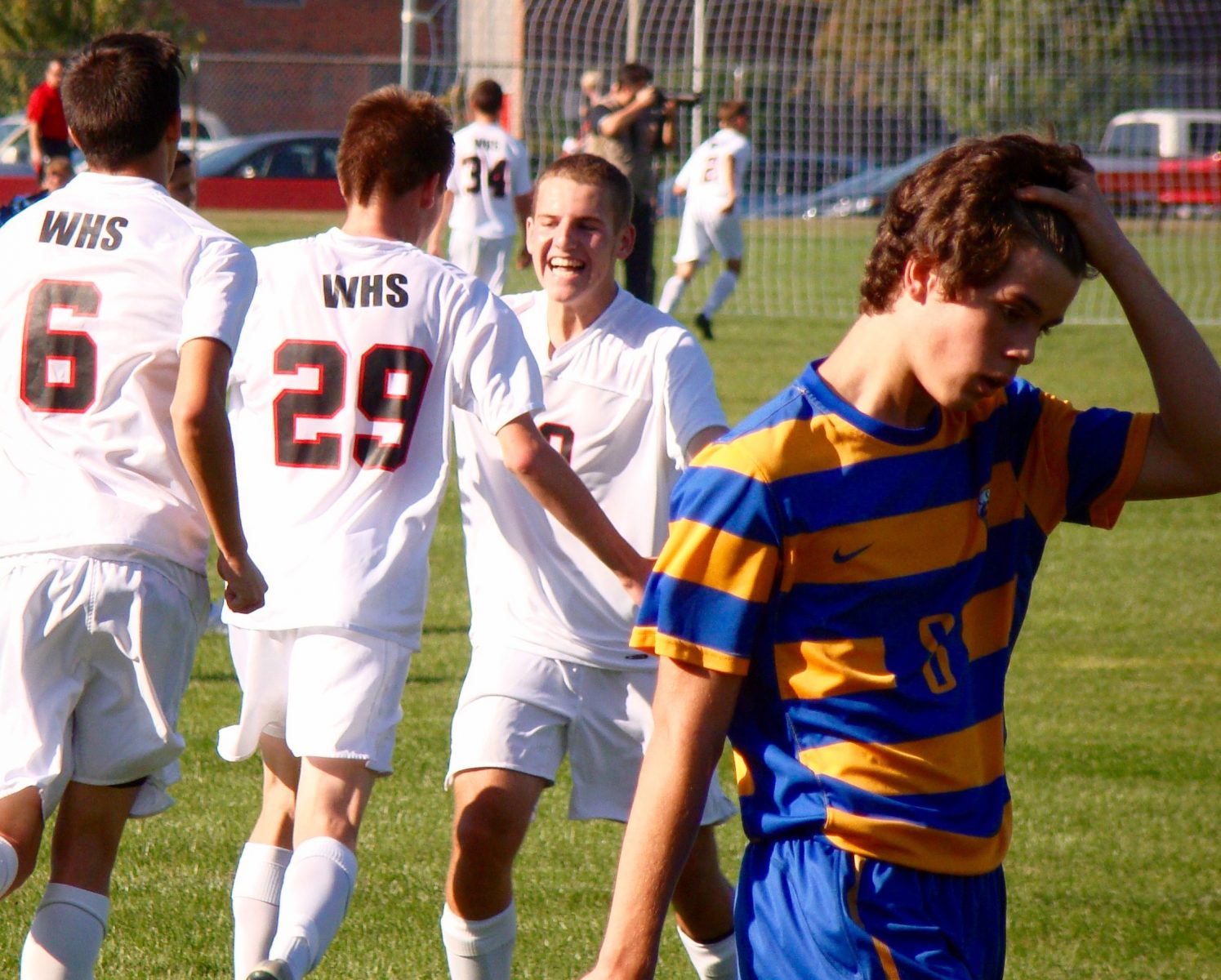 WEST SPRINGFIELD – The Westfield High School football team was left feeling blue after Friday night’s road loss.
West Springfield senior quarterback Anthony Costa scored four touchdowns to lead the blue-jerseyed Terriers past Westfield 33-0 at Clarke Field Friday night.
Costa ran for two touchdowns, threw for another, and scored on a long interception return on defense. He also picked off another ball late.
It may have been a clear sky during game time but the storm clouds hovered over the Westfield Bombers from the outset.
West Springfield started with great field position, opening up play at the Westfield 42-yard line after a long kickoff return on the game’s opening possession.
After a 17-yard pass play from Costa to senior fullback Zach Baker and a late hit penalty (half-the-distance to the goal), West Springfield had a first-and-10 at the Westfield 12. The Terriers’ offense stumbled though with two straight penalties resulting in a loss of 15 yards, an incomplete pass, a fumbled snap (West Side recovered), an incomplete pass, and eventual punt.
Both teams each had a “three-and-out” before Westfield finally churned out some yardage.
Midway through the opening quarter, Westfield junior running back Wilton Royal took a short pass from quarterback Austin St. Pierre in the middle of the field and juked ahead Darren Sproles-like 26 yards for a first down. After a two-yard loss, St. Pierre completed a nine-yard pass, and Royal raced ahead for a nine-yard run. One play later, the Bombers fumbled the ball away.
West Springfield took over on its own 41 with 2:19 remaining in the quarter. The Terriers drive quickly stalled.
Westfield blocked the subsequent punt, and took over on the West Side 40 with 37.9 seconds remaining. The Terriers defense clamped down though early in the second quarter, forcing a turnover with St. Pierre sidelined by an apparent injury. He was also lost late in the season opener (a loss to Abington) to injury after scoring a whopping five touchdowns.
Costa, playing defensive back, intercepted a pass and returned it 77 yards for a touchdown, scoring 55 seconds into the second quarter. The extra point made it 7-0.
West Side took a 13-0 lead on its next series, scoring on sophomore running back Anthony Tangredi’s 21-yard touchdown run with 3:12 left in the half. The key play on the drive was a 40-yard pass completion from Costa to junior wide receiver Kyle Beane, setting the Terriers up deep in Westfield territory.
West Side threatened to make it a three-touchdown lead late in the half with the ball just outside the red zone, but Westfield’s defense came up with a big sack to stop the Terriers short as the time ran out in the quarter.
In the third quarter, West Springfield chewed up a lot of clock and yardage with a long, time-consuming drive. The Terriers started on their own 21-yard line and drove 79 yards in eight minutes, 33 seconds, scoring on Costa’s 2-yard, TD run with 1:27 remaining in the quarter.
Costa rolled out to his left on 4th-and-goal, crossing the goal line just inside the pylon for a 19-0 lead. A two-point run from Tangredi made it 21-0.
The fourth quarter featured much of the same.
West Side moved the ball 62 yards over a five-minute, 21-second span. The Terriers scored on Costa’s 15-yard keeper to take a 27-0 lead.
West Springfield took advantage of another turnover late. The Terriers made it 33-0 when Costa found Baker for a short pass in the flat. Baker turned the ball upfield and raced 65 yards for a touchdown. 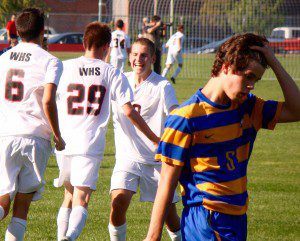 The Bombers celebrate their first goal in the first half of a high school boys’ soccer game against Chicopee Comp Friday. A Colts player, at right, walks off in frustration. (Photo by Chris Putz)

BOYS’ SOCCER
Westfield 8, Chicopee Comp 0
Igor Belykoptov recorded a hat trick, and Mike Visconti had two goals and one assist as Westfield routed Comp at home Friday.
“We caught Comp after they played a tough game against Agawam so they were a bit tired,” Westfield coach Andrew Joseph said. “The score was a bit misleading but we certainly executed very, very well today. We didn’t waste any chances.”
Bombers’ coach Ian Saltmarsh (4 saves) earned a shutout.

GIRLS’ SOCCER
Longmeadow 3, Westfield 0
Aliviah Shapiro scored two goals – one in each half – to lead Longmeadow.

THURSDAY’S LATE RESULTS
BOYS’ SOCCER
Westfield Technical Academy 6, St. Mary 1
Alex Stepanchuk scored two goals, and four other Westfield Tech players collected one apiece to lead the Tigers Thursday night at Bullens Field.
Westfield Tech’s Jeremy Kovylyak and Kirill Ohkrimenko scored their first varsity goals, and Vitaliy Terescshuk and Tyler Hall notched a goal apiece off of set plays.
St. Mary scored the first goal of the game – the team’s only goal of the night – capitalizing on a Westfield Tech miscue in the backfield.
“We didn’t panic,” Tigers coach Kyle Dulude said. “We kept our composure and believed in ourselves.”
Westfield Tech snuck two goals in before halftime, rallying for a 2-1 lead. The Tigers scored four goals in the second half.
“We played a stronger second half,” coach Dulude said.
Dominic Rosario was strong in the midfield for Westfield Tech.
“We are playing well,” Dulude said. “Hopefully we can keep things rolling next week … Guys are just so excited to play soccer. We have a lot of guys who love to learn and love the game itself.”

Gateway 1, Mohawk 0
Gateway’s Jessica Van Heynigen scored the only goal of the game, the game-winner. Becca Herman earned a shutout (3 saves) for the Gators.