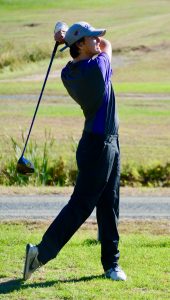 WESTFIELD – The Westfield Technical High School golf team is surging at the right time.
Westfield Tech kept its postseason hopes alive with a key 14.5-9.5 win over Pathfinder Tuesday at East Mountain Country Club.
Westfield Tech’s Dave Romani led all golfers with a 48, and the Tigers received key points from Jake Collier, Tanner Levasser, and Riley Sullivan, who each beat their opponent.
“Overall we started off very slow,” Westfield Tech golf coach Bob Eak said, “but we ended up taking advantage of some mistakes by Pathfinder and put up some good scores at the end.
Westfield Tech improved to 6-6, and can now qualify for Monday’s championships with a win over St. Mary’s Thursday at Tekoa Country Club at 3 p.m.
“The kids are excited going into Thursday,” coach Eak said. “We’re going to hit it hard in practice.”

BOYS SOCCER
Bombers rally past Blue Devils
Westfield 2, Northampton 1
Westfield rallied from a 1-0 deficit with a pair of second half goals to turn back visiting Northampton.
Northampton took the game’s first lead as the Blue Devils took a deflection and walked in on a breakaway.
Jack Fournier tied up the game for Westfield on a penalty kick with about 20 minutes remaining. Jimmy Hagan scored the game-winner with 11 minutes left. Mike Grochowski assisted.
Westfield goalie Mike Lurgio made two saves. Bombers’ Tyler Shrewsbury, R.J. Piper, Pat Lurgio, and Grochowski delivered defensively.
“We had the ball most of the game,” Westfield coach Andrew Joseph said. “We were attacking so much; that was the best defense for us.”
“We had plenty of opportunities and managed to sneak a few through.”
Westfield, which improved to 5-8, will now focus its sites on league foe, Belchertown, in a Friday night showdown at Belchertown High School.

GIRLS SOCCER
Clark lifts Gators
Gateway 1, Mount Everett 0
Maddie Clark scored a first half goal, and the Gators (9-2) held off Mount Everett on the road.
Erin Harris delivered the game-winning pass, booting it about 20 yards ahead to Clark, who flicked it past the sweeper and punched it into the right side of the net.
Westfield goalie Becca Herman recorded a shutout.