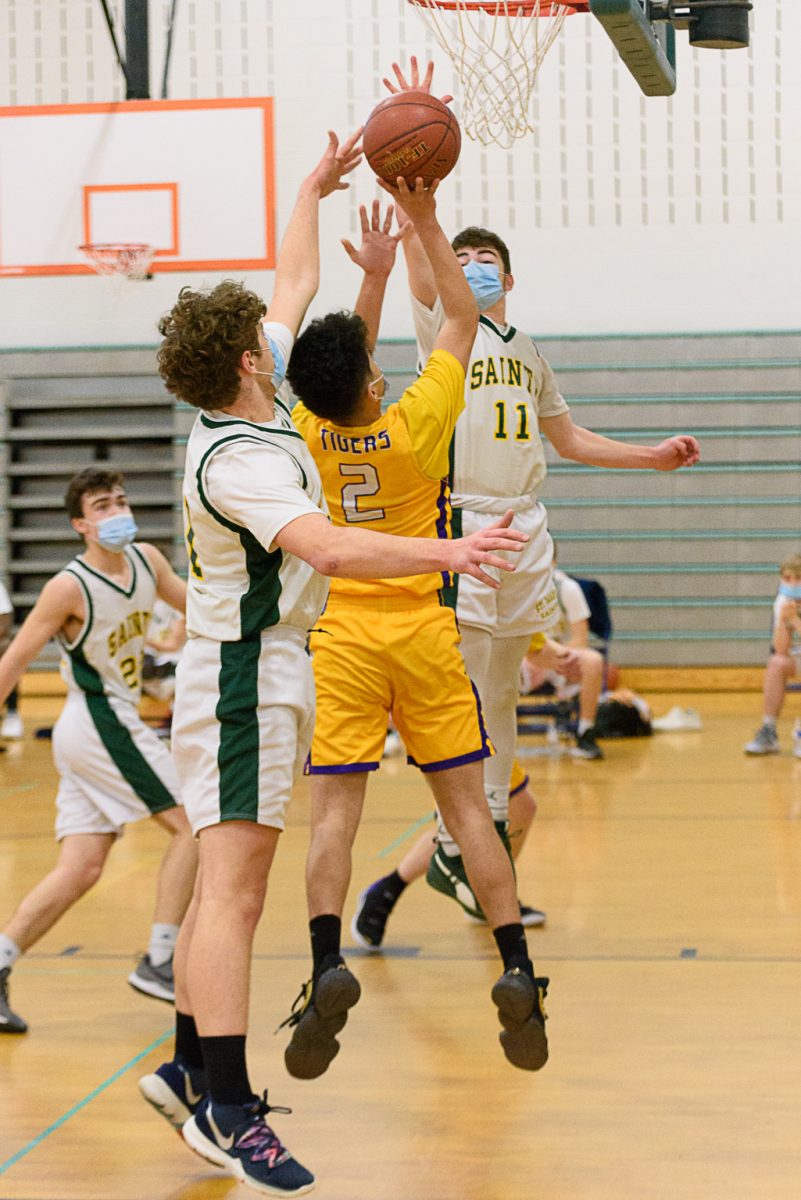 WESTFIELD – It’s three up and now three opponents down for the Westfield Technical Academy High School boys basketball team.
Westfield Technical Academy won its third straight game to start the 2021 season, spoiling St. Mary’s march to perfection. The Tigers mauled the Saints 62-35 Thursday night at Westfield Intermediate School.
Westfield Tech opened the game with a 13-0 run, and never looked back.
“That was huge obviously because I feel like they never really came back from that good start,” said Westfield Tech’s Brody Zabielski, who finished with a game-high 19 points.
Zabielski had a steal in the opening seconds of the first quarter, and finished the play off with an uncontested layup. He made a second consecutive basket, a 2-pointer, and drained a 3-point shot to make it 9-0.
Josh Sturmer, who finished with 17 points for Westfield Tech, scored four points during the team’s early run, including a steal and breakaway of his own. Two free throws from Andrew Navarro with 4:34 remaining in the quarter capped off the 13-0 run. 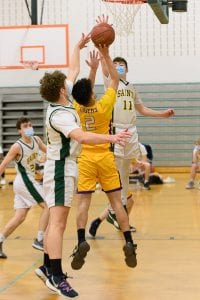 “We were getting steals with the defense and finishing by running the offense,” Zabielski said. “I think we all hustle … and no one gives up. We play hard.”
St. Mary’s (2-1) discovered that the hard way. The Saints went scoreless until Jonathan Baillargeon made a free throw with 3:15 left in the opening quarter.
St. Mary’s turned up its intensity level in the second quarter, initiating more aggressive drives to the hoop, drawing fouls, and going to the free throw line. Still, Westfield Tech managed to build upon its early lead with two baskets late in the half from Nick Montenero and Sturmer, a three.
St. Mary’s trailed 31-8 before an exhilarating and-one from Brady Collins just before the half gave the Saints a glimmer of hope.
Westfield Tech quickly extinguished any thoughts of a St. Mary’s comeback right from the get-go in the third quarter. Zabielski nailed consecutive 3-pointers, including one the old fashioned way when he stole the ball and was fouled in the act of shooting. The ball fell through the net, and he converted at the stripe to give his team a 37-13 advantage.
The two teams exchanged baskets for much of the remainder of the third quarter. Zabielski and St. Mary’s Tom Baillargeon and Colin Ramos provided the highlights with made 3-point shots.
In the fourth quarter, St. Mary’s cut its deficit to 20, but it was the Tigers’ #20, Sturmer, who fueled the team’s finish with two more made baskets and a free throw. Sturmer’s teammate, Riley Sullivan, made a 3-pointer.
“We like to push the tempo – – don’t get me wrong, we like to play fast – – but if you’re behind you even might have to try to play even faster just because the clock’s against you,” Westfield Technical Academy boys basketball coach Kyle Dulude said. “We haven’t been put in that spot yet. I’m sure we will at some point. It’s going to happen to us. It will be interesting to see how they react and how they hold together.”
If the early portion of the season is any indication, Westfield Tech will likely pass that test when presented with that challenge.
“Guys are coming off the bench and doing their job,” coach Dulude said, noting key minutes from DeCarlo Lincoln, Eddie Aquino, and Dominick Lincoln. “They didn’t open the doors for the other team to all of a sudden just have a big swing. I think that’s what we’re trying to learn right now is just not to give any teams big swings. If we don’t play well for 30 seconds to a minute, let’s not have it be an eight-point swing. Let’s just have it be a two possession type of thing.”
For Westfield Tech, it is the little things that continue to make a big difference.
“I think one of the best things I’ve heard in a long time today was from one of my bench players,” Dulude explained. “I went over to him with about four minutes left. I know I didn’t give him any minutes, and I said I’ve been trying to get you in. He said, ‘Coach, it doesn’t matter, we’re winning, it’s about the team, it’s not about me, don’t worry about me, just keep coaching.’”
“For me that goes above and beyond anything else for a player,” he continued. “It’s just that mutual respect. What I’m excited about right now is the fact that I’ve got players acknowledging those little things like that. That’s what moves the program forward. That’s what keeps the program strong when you have the last guy on the bench saying don’t worry about it. …It just really lets us know we’re as good as our last player.”