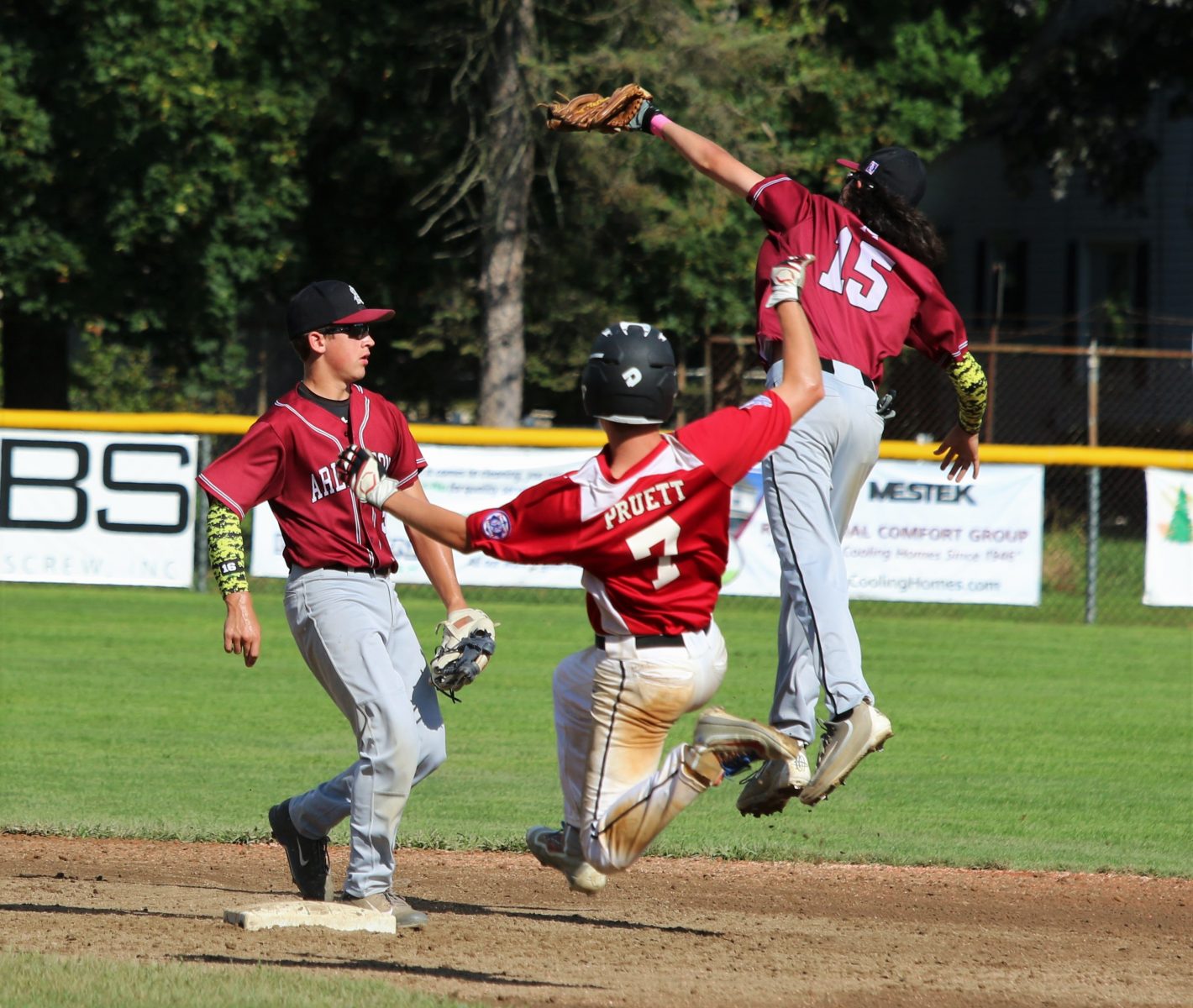 WESTFIELD – After earning a momentum-swinging win over Sarasota (Fla) yesterday, Tri County (ME) continued to stay hot at the right time.
A 5-1 victory over Arlington (MA) on Sunday at Bullens Field now puts Tri County at 2-2 in pool in the Babe Ruth World Series.
Dropping the first two games of the tournament, Tri County knew they had to quickly pick up their play and show their true potential.
“I really feel confident because we beat two really solid teams,” said Tri Town manager Tom Morton. “I couldn’t say more good things about our kids.” 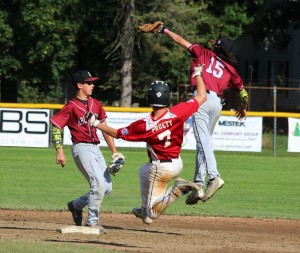 Arlington (MA) players looking for the out while Tri – County’s Jonny Pruett (ME) goes for the steal. (Photo by Kellie Adam)

It was Tri County’s ability to jump on Arlington early. Down 1-0 in the bottom of the first, Tri County produced four runs to build a lead. Charlie Morton led off with a single and then Janek Luszka followed up with a double as Morton scored all the way from first base.
A Jonny Pruett single to left field scored Luszka and then Wyatt Williamson had a sacrifice fly to make it 3-1 Tri County. The lead was stretched even more when Dylan Desroches laid down a perfect suicide squeeze that pushed Williamson home and have a 4-1 lead.
Tri County was also able to put their defense on display. After Brendan Jones hit a sacrifice fly to score Sam Theodore and give Arlington the first lead of the game, a spectacular play in the outfield would help stop any further bleeding.
With one out and Anthony Messuri on third, Tyler Callahan flied out to center field. Tri County center fielder Charlie Morton made the catch and then made a perfect throw to home plate to gun down Messuri at the plate for the ending-inning double play.
The big defensive play by Morton was a crucial aspect to Tri Town’s success.
“It totally changed the momentum of the game,” said Morton.
Adding one more run in the bottom of the second to make it 5-1, Tri County would end up having more than enough offense, knowing who they had on the mound.
Williamson was able to go the complete seven innings, giving up just the one run on two hits that all came in the first inning. Williamson pitched a no-hitter the last six innings.
“Wyatt asked for four (runs) in the first and once we gave it to him, we knew we were good,” said Morton. “When he gets it in his head he’s going to shut those guys down, he’ll do it.”