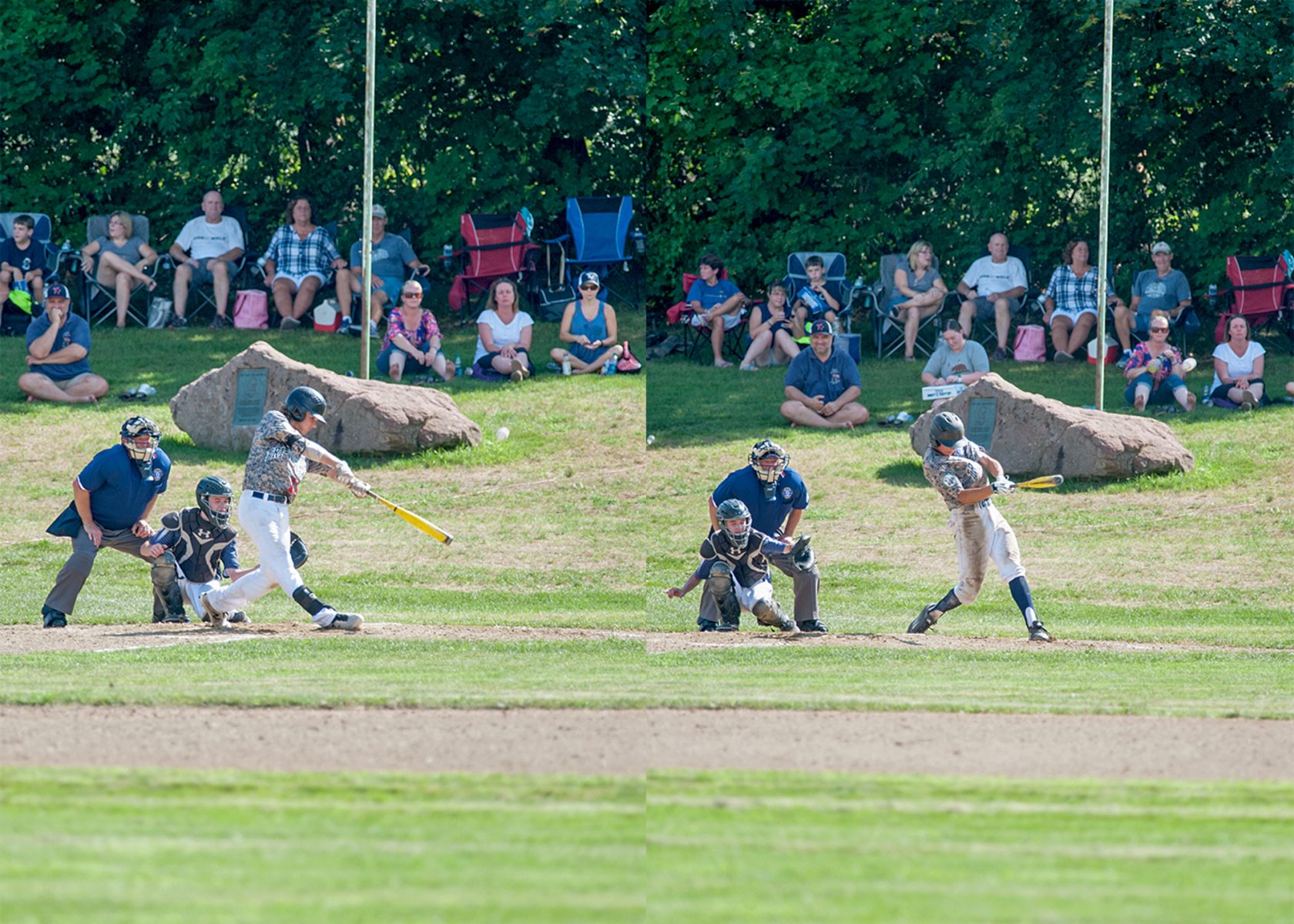 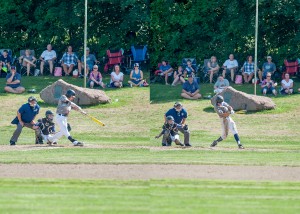 Tri-Valley’s Thomas Gavello and Asher Golden hit back to back home runs Saturday against Pittsfield at Jachym Field. (Photo by Bill Deren)

WESTFIELD – Tri-Valley (CA) won their second game in a row by mercy rule, beating Pittsfield 13-1 in five innings Saturday.
Tri-Valley was able to get hits from nine different players in their line-up, including five extra-base hits, to put away Pittsfield. Tri-Valley improved to 3-0 in the Babe Ruth World Series Tournament, while Pittsfield dropped to 0-2 with the loss. This was also the first game of a doubleheader for Pittsfield after their game Friday was rained out.
Pittsfield was actually able to start the game with a 1-0 lead. After holding Tri-Valley off the board in the top of the first, shortstop Christian Womble led off the bottom of the inning with a first-pitch double to left field. He was moved to third on a sacrifice hit, then brought home by a sacrifice fly in foul territory after Tri-Valley leftfielder Michael O’Hara made a spectacular diving catch.
In the second inning though, Tri-Valley tied up the game on a Jaden Sheppard solo home run to left. They took the lead in the same inning after pitcher Tyler Nassar singled home a run to make it 2-1. Tri-Valley continued scoring, putting up another four runs in the third inning, making it 6-1.
After Nassar struck out the side in the bottom of the third, Tri-Valley proceeded to bat around the order in the fourth, continuing the onslaught. The inning started by Tommy Gavello and Asher Golden greeting new Pittsfield pitcher Zak Bernardo with back-to-back solo home runs. The runs continued to add up for Tri-Valley, as 13 batters came up to the plate in the fourth inning, eventually scoring seven runs.
The game stayed 13-1 in favor of Tri-Valley as pitchers began to make quick work of hitters the next inning. The game ended at the conclusion of the fifth inning, after the mercy rule was enforced due to Tri-Valley being up at least 10 runs.
The players of the game were Gavello for Tri-Valley and Womble for Pittsfield. Gavello was 2-for-4 with a home run and a triple, two runs scored and an RBI, while Womble – who won his second straight player of the game award – was 1-for-2 with a double and the lone run scored by Pittsfield.
Tri-Valley increased its total runs scored through the firs three games of the tournament to 33.