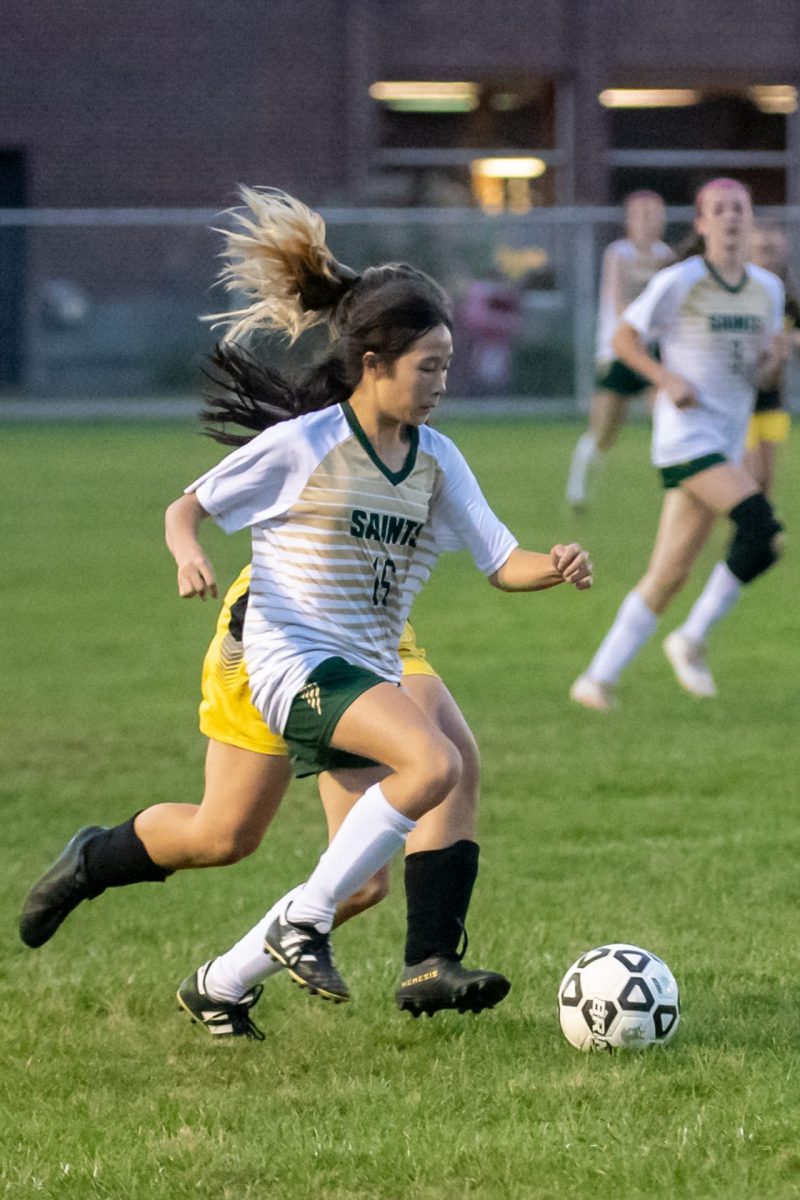 NORTHAMPTON – While the Goodreau sisters have had starring roles for the St. Mary’s girls soccer team – – oft-injured senior Allie scored her 100th point two years ago and up-and-coming sophomore Emma entered the week needing three points to reach 100 – – it was a young freshman who literally stole the show Monday.
St. Mary’s freshman Eliana Umana Kimura stole a throw-in from four defenders deep in opposing territory late in the first half of a high school girls soccer game on the road against Smith Vocational, weaved in between the defense to find an opening, drifted to her left and kicked a well struck ball with her left foot past the goalie for the only goal of the game. The Saints held on for a hard-fought 1-0 win. 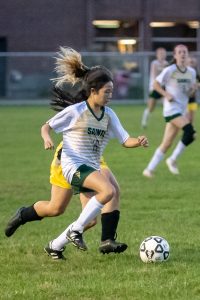 “I did it with my left foot which is unusual,” Umana Kimura said. “I just shot it. …I didn’t think about it. I shot it.”
It was Umana Kimura’s second career goal. But she was not the day’s only hero. St. Mary’s junior goalie Amelia Willenborg made nine saves to earn her 13th straight shutout.
“Honestly, it’s not even me as much as it’s a lot of the defense,” Willenborg explained. “Our defense has been playing spectacular for the past couple weeks, the month. Compared to the past years, I’ve had less shots (on goal) because our defense has gotten so good. I’m just trying to stay as calm as I can back there and just really talking and kind of almost getting to the balls … rather than letting them go round in the box.”
Smith Vocational put Willenborg to the test late with two consecutive corner kicks. The Saints defense headed the first one out of bounds. Willenborg burst through a scrum out in front of the net on the second one like Superwoman preparing for liftoff and delivered a knockout blow to the ball.
“I was coming out (of net),” Willenborg said. “I didn’t think I was going to be able to secure the ball good enough since everyone was around me so I decided to punch it out and get it as far away as I could.”
It was a moment the junior goalkeeper had been waiting for.
“I think, for me, personally, when I have the most pressure,” she said, “that’s a time where I shine and that’s when I do my best. That’s really been a goal and achievement of mine. I just hope I can keep it up as long as I can.”
Although a few chances did materialize throughout the contest for the Goodreau sisters and others, Smith Vocational goalie Maggie Lauder made some tremendous saves, sliding and diving to thwart the Saints’ shots.
Luckily for St. Mary’s, Umana Kimura’s scoring strike stood as the only goal for the remainder of the game. 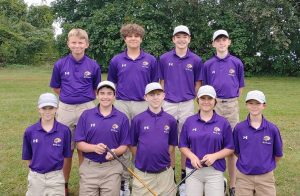 Bombers chase Lions
Westfield 158, Ludlow 177
Joey Calderella (37) and Andrew Florek (38) shot in the 30s as Westfield easily turned back Ludlow at Tekoa Country Club. Bombers’ Anthony Schabowski finished with a 40, and Ryan LaPoint had a 43.
With the victory, Westfield improved to 4-4 overall, needing three more wins to qualify for the postseason.

BOYS SOCCER
Pittsfield scores three unanswered goals to cap off rally
Pittsfield 3, Westfield 2
Nichita Solopa scored with an assist from Shea Byrnes eight minutes into the game, heading in a cross pass from Mark Kravchuk to make it 2-0 Westfield.
Pittsfield rallied to tie the game on a pair of goals from Danny Kankam. Kyle Cardoso headed in a cross pass from Ethan Breitmaier with seven minutes left in the game to win it.
Westfield goalie Aidan Van Oostveen and Pittsfield keeper Will Kinne each collected three saves.

Baillargeon tallies five points in Saints win
St. Mary’s 6, Mohawk 0
St. Mary’s bounced back from last week’s loss with a convincing victory.
Johnathan Baillargeon added to his season goal tally by putting up four goals (two unassisted) and assisting on another. Brady Collins and Trevor Corriveau each scored a goal. Everett Stec had an assist.
“We had strong play with all our lines today and the team played with discipline,” St. Mary’s coach Andy Lussier said. “Jose Cote kept our defense solid, shutting down the Mohawk runs.”
St. Mary’s goalie Thomas Baillargeon (7 saves, 1 assist) earned a shutout. The Saints return to action Friday at home against Hampden Charter School at Westfield Intermediate School at 4 p.m.

FIELD HOCKEY
Rams battle Terriers to a tie
Southwick 1, West Springfield 1
Devan Fox scored the only Southwick goal in a back-and-forth, physical game that could have went either way. Alyssa Jacob assisted.
“(We) took some time to adjust to playing on turf but once they adapted they were able to put together some really good passages of play,” Southwick field hockey coach Jenn Oakland said.
Southwick goalie Ezri Johnston (10 saves) and the Rams defense made some clutch saves and perfectly timed tackles to keep West Side off the scoreboard, especially in the final minutes of the game.