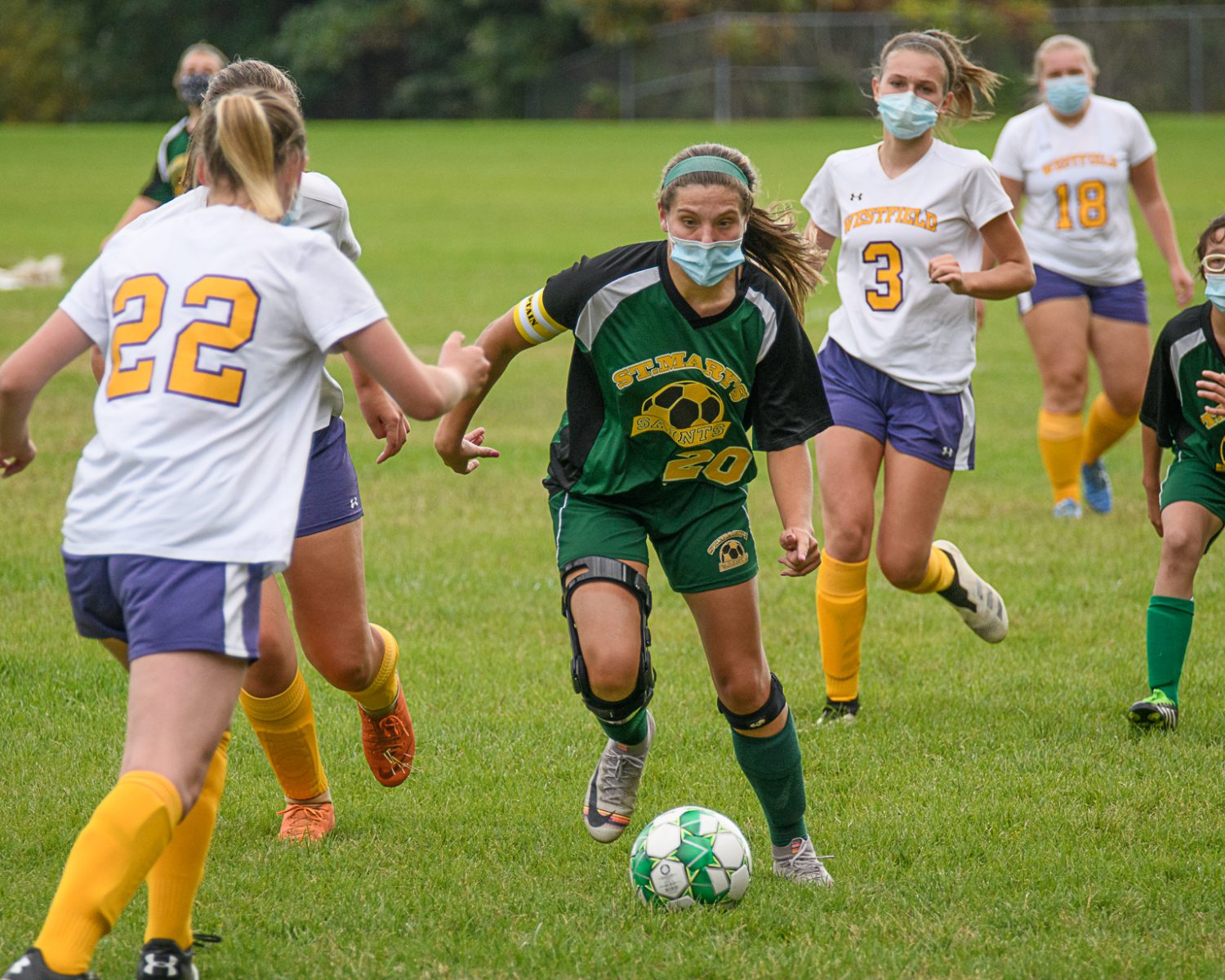 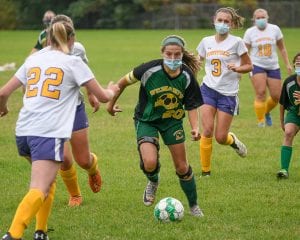 WESTFIELD – For St. Mary’s High School girls soccer junior forward Ali Goodreau, Monday’s goal was a long time coming.
One year ago, Goodreau suffered a torn ACL and meniscus tear in a mid-season game against Westfield Technical Academy. Although she would have been ready to rejoin the team this past September, the coronavirus delayed her return by about two weeks.
On Monday, she scored two goals in a game against Westfield Technical Academy, her first since being injured a year ago, and the St. Mary’s Saints caged the Westfield Tech Tigers 3-0 at Westfield Intermediate School.
“Sitting out 12 months isn’t fun,” Goodreau said, “but being back just being able to be out on the field – – the first game was so weird to me – – contact-wise and just being able to shoot the ball and watch it go in again, that whole feeling I’m just happy to be back.”
Goodreau drove home St. Mary’s first goal of the game in the first quarter. The ball was bouncing around off a couple of players, hit off a Saints’ player’s foot and caromed back to Goodreau around the 18-yard line. Goodreau shot, and the ball rolled past Westfield Tech freshman goalie Lindsey DeLand (11 saves). Anna Williams, who had three points in a season-opening Saints’ victory, earned the assist. 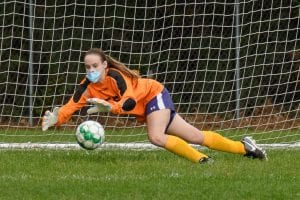 Goodreau’s relentless effort paid off again in the second quarter, working the ball inside and drilling a shot at Leland. The ball bounded back out to Williams, who scooped it up and knocked home the rebound for a 2-0 lead.
In the closing minutes of the fourth quarter, Goodreau scored unassisted.
St. Mary’s sophomore goalie Amelia Willenborg (1 save) logged a shutout. Freshmen Macy Woodger and Kailyn Cabrini, and sophomore Emma Bialas also delivered solid efforts for the Saints.
Allyssa Slack stepped into the sweeper position for the first time this season for Westfield Tech, filling in for a teammate, and stepped up. Tigers’ Christina Mosijchuk also played well.

BOYS SOCCER
Liquori-Foriter-Keeney connection propels Bombers
Westfield 4, Hampshire 0
It was a connection between three players that resulted in four scores and a victory for the Westfield Bombers.
Westfield’s T.J. Liquori scored once and had two assists on a pair of goals from Jack Fortier. Jack Keeney had one goal and assisted on Liquori’s first score.
Westfield goalie Aiden Van Oostveen (5 saves) posted a shutout.