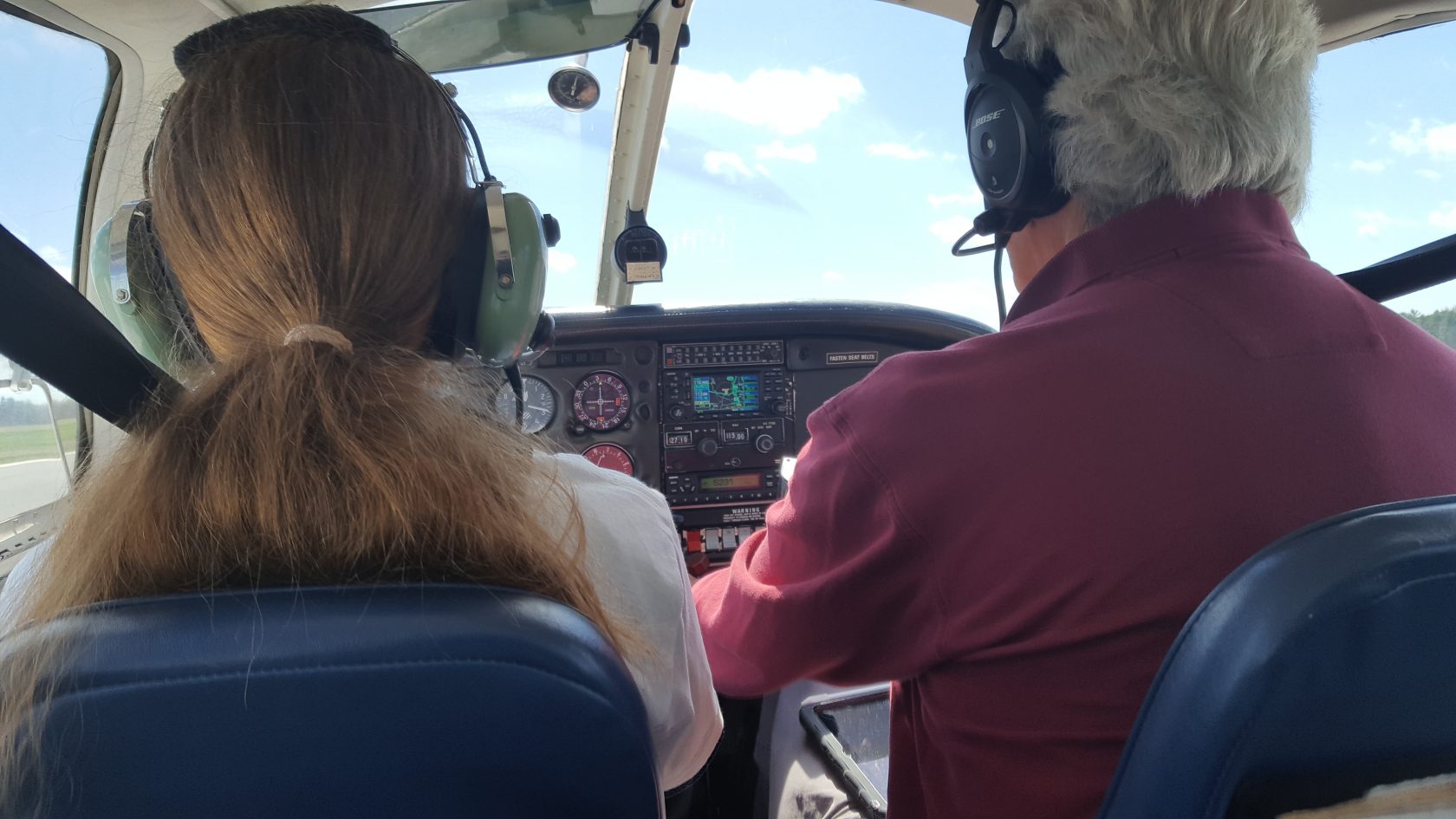 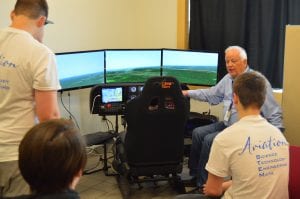 William Coughlin (blue shirt) gives instructions on how to operate the flight simulator. Through map data, the simulator was able to show the same area of flight that the students would later do in real life. (Photo by Peter Currier)

WESTFIELD- Seventh and eight graders from Westfield Middle School were given the opportunity to fly an airplane Monday morning at Barnes Regional Airport as part of the Western Massachusetts Wright Flight program.

The program consisted of 12 classes, one per week, in which the students learned the principles and history of aviation. One week consisted of a trip to the New England Air Museum in Windsor Locks, Conn. In other sessions, the students used a flight simulator to get a feel for how a plane is controlled in real time.

The 12-week program culminated in a final day in which the students were allowed to operate a small plane over the skies of Westfield and the nearby cities and towns. The kids were split up into three groups who took turns flying the planes and doing other activities. One group would get a tour of the control tower and a UH-72 Lakota military surveillance helicopter. Another group would get the chance to operate a much more sophisticated flight simulator than they had previously used. 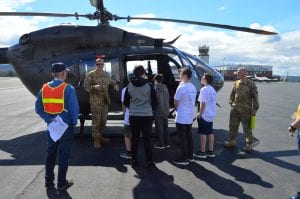 Helicopter pilots from the Air National Guard give the students a tour of their UH-72 Lakota surveillance helicopter. The chopper is not outfitted with weapons, but instead an advanced reconnaissance system on the bottom. (Photo by Peter Currier)

“Flight Simulators are actually generally harder to fly than the real thing. Real planes are much more stable than what they give you in a simulator,” said Wright Flight volunteer William Coughlin as he instructed students on the advanced simulator.

The third group was split up further into groups of two who were then paired with a professional flight instructor from Northampton Airport. The groups would go up in to one of three small planes, Piper Warrior 2s, and have the opportunity to fly it themselves with the flight instructor in the co-pilots seat. Each student got to fly for 30 minutes, including the full takeoff and landing. None of the students have ever flown a plane before. The three planes were donated for the day by the Northampton Aviation School.

“It’s interesting to see some of the students go into the plane looking really nervous,” said Coughlin, “But then they walk out of the plane with kind of a swagger in their step.”

One of the routes taken by the students took them south of Barnes towards the downtown area of Westfield. Students got to fly directly over Westfield Middle School before they turned towards Six Flags. At one point one could clearly see Springfield and Hartford simultaneously before the student pilot turned and flew directly over Springfield. The planes all maintained an altitude of approximately 3,000 feet.

In at least the case of Genny Howes, a seventh grader who took the final flight of the day, the ride was bumpy. It was almost similar to turbulence one experiences on a larger commercial aircraft. According to Howes’ flight instructor Vinny Melling, that is not the result of her flying, but rather the effect of heat rising from the ground. The smaller, propeller operated aircraft are more susceptible to conditions like that, and will experience more turbulence between the heat and the winds at 3,000 feet. 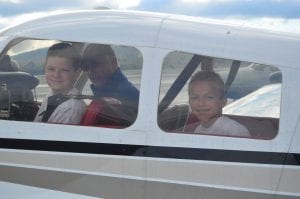 From left: Matthew Moriarty, Flight Instructor John Domaingue, and Michael Dorunda. Matthew did his 30 minute flight first with instruction from Domaingue while Michael sat in the passenger seat in the back, waiting for his turn to fly after Matthew successfully landed. (Photo by Peter Currier)

Howes’ flight was otherwise smooth. The takeoff and landings both went without a hitch, although the communications between the plane and the tower were done by Melling, as the students were not all well versed on the lingo. If one were to never be told they were being flown by a seventh-grade girl, they may have never known the difference.

The student’s parents were allowed to attend and watch as well from the observation deck at Barnes. They watched, in most cases anxiously, as their kids left ground for the first time right in front of them. One may imagine now that the parents will be able to sit a little easier when their kids eventually start driving cars, knowing they can faithfully operate a machine 3,000 feet in the air. The students were also accompanied by Vincent Baker, the Adjustment Councilor for Westfield Middle School and the Wright Flight liason.

At the end of the day, the students were presented with a certificate stating that they had logged 30 minutes of flight time. If they were to continue to take flying seriously and pursue a license, it would take 7-10 flight hours with an instructor, depending on the student and the discretion of their instructor, before they could begin doing solo training flights. It is then 40 hours of flight time before they can officially receive their pilots license. 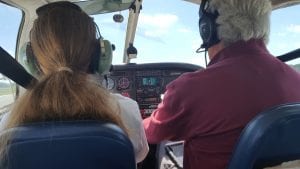 Genny Howes (left) flying for the first time in a Piper Warrior 2 small aircraft while Vinny Melling communicates with the tower. Besides the communication, Melling at no point had to take control of the craft from Howes. (Photo by Peter Currier)

The Wright Flight program has been going since 1988. It consists of two major programs called Aviation 1 and Aviation 2. The seventh and eighth graders take the aviation 1 course before they can take the sequel program as high schoolers. The high schooler’s course introduces more advance flying mechanics and concepts, like long distance flight planning and mechanical engineering.